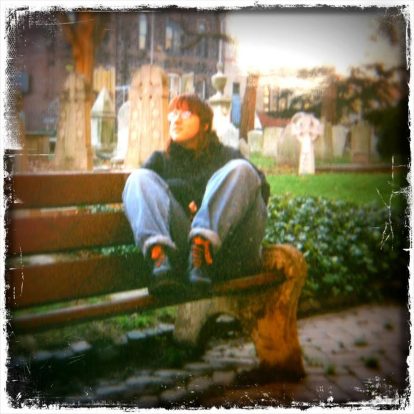 I got off the bus at my new school and saw the parking lot filled with cars. This was nothing like my former crowded, noisy, urban Philadelphia high school with the dark stairwells and constant police presence. I’d never seen so many Ford Tauruses in my life. Some even had monograms on the doors. I didn’t even have a bike. I had a skateboard. A skateboard. I couldn’t even do an ollie, but for me, my board was transportation. It had worked in the city.

Out in the suburbs, I’d tried to skate to the mall but only got about four blocks away when I encountered a county road. With a 55 mph speed limit. I tried for about 15 minutes before I gave up. This was a real-life game of Frogger I was not willing to play.

I was 17 and had lost too many places to count: foster homes, schools, churches, playgrounds. But this was the worst so far. I’d made this move alone. Three weeks before, I’d had a family, my own room, my chair at the dinner table, my hook on the coat rack. But when they discovered I was cutting, they sent me to the hospital. My foster family of 7 years felt they couldn’t handle me anymore, a social worker told me. I wasn’t going back. My parents couldn’t even tell me themselves. They’d gone on vacation.

I was too old to place, and I was going to age out of the system soon, so I was assigned a bed in a Supervised Independent Living facility managed by Bethanna Children’s Home, the children’s home handling my case. It was in a suburb of Philadelphia, an apartment with a roommate and a Residential Adviser. I was supposed to be learning life skills like banking, shopping, getting a job, making a budget, cooking for myself, doing my own laundry. I wasn’t great at most of those.

You’d think I would’ve reveled in this staged independence, but I didn’t. This was just another address I wouldn’t even have for a full year, and it felt like a punishment after my psych stay. I was removed from the home I’d lived in for middle school and junior high and taken from the city I loved. I would spend my senior year of high school, and my last year as a child, with strangers.

One afternoon a week I took the R2 train into Philadelphia for my counseling appointment. I don’t remember the building or the therapist. What I do remember is wandering the streets of Old City after my appointment, getting a soft pretzel and Pennsylvania Dutch birch beer at Wawa and just walking.

I would head toward the Delaware River and pass through Christ Church Burial Ground at 5th and Arch, where Benjamin Franklin and four other signers of the Declaration of Independence were buried. It was usually deserted except for tourists throwing pennies on Franklin’s grave for good luck. The earliest legible marker is from 1723. It was the perfect place for a suicidal teenager to spend hours alone. My time there didn’t make me want to die, in fact, it had the opposite effect. I felt at home there, comforted by a sense of permanence and presence.

I didn’t have much in the way of family or stability or even a future, but I had cobblestone streets, colonial flags, comforting row homes, historic markers, marble stoops with ornate cast-iron boot scrapers and hitching posts. And it wasn’t just the beauty I saw that made it home, it was the ugliness too. The empty lots, abandoned houses, broken windows, Free Mumia graffiti, and the box cities under the highway were the landscape of my heart. The soundtrack that sung in my head was the rumbling, shrieking el trains and the sparking, clattering trolleys. I claimed it for myself and it was all mine. Even Ramona Africa and the houses firebombed by Mayor Goode during the MOVE tragedy, consuming almost 4 city blocks, killing 11 people, and leaving 240 people homeless. They became a part of me, seared into my brain by flaming buildings seen on a cast-off motel TV with a tuning knob.

What little estranged family I have left in Philadelphia decreases by the year, but it’s not the people that draw my thoughts and my heart there. It’s the land–baptized by Franklin’s printing ink, revolutionary blood, and my own tears.

And William Penn in the distance, watching over it all. He prayed for his city to be preserved from those who would “abuse and defile thee, that you mayest be kept from the evil that would overwhelm, that thy children may be blest of the Lord.“

5 thoughts on “Ink, Blood, and Tears”