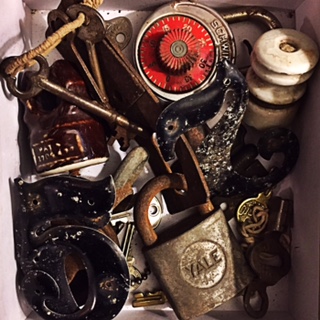 It seems like I was born into forced simplicity or at least semi-poverty. I never had a lot of things. When I was taken to my first foster home my whole four-year-old world could fit in a half-full paper bag rolled down at the top.
After my second move the foster mother took a small Winnie-the-Pooh away from me since my birth mother had given it to me. She feared it would would make me sad to have a reminder of her. They took away the Roberta Flack “Killing me Softly” 45 my brother had won for me at a carnival because it was inappropriate for a child. The commandeering of the Budweiser mirror was completely understandable.
The Christmas of 1980 my grandmother gave me an AM radio inside a long-haired plush dog. I would listen to it as I fell asleep to DEVO, Kenny Rogers, Styx, Anne Murray. Once these same parents knew what it was they decided it was inappropriate, too, and confiscated it.
Then there was the youth group leader who didn’t even know my name but hijacked my Guns N’ Roses tape because, again, it didn’t fit in with someone’s definition of appropriate. Interesting, that the two forms of this word, the adjective uh-proh-pree-it, and the verb uh-proh-pree-eyt, were pretty much interchangeable in my life.
People felt entitled to decide what was appropriate for me and then appropriate it. I’ve had to learn to hold things lightly.
Even when moving to college all I owned was a set of dinosaur sheets, some clothes, a tape player, and not much else. My next set of foster parents packed me up without a goodbye. I didn’t get to take my Nancy Drew books, Shaun Cassidy records, MADmagazines, or microscope with me.
In all these instances, the things held meaning for me, the people who gave them to me were important, and they were mine, something of my own while I lived in other people’s homes.
You’d think that I’d want to make up for all my belongings being taken away by surrounding myself with objects giving me a sense of security, and to keep acquiring to build a wall of stuff around myself.
In the years that I was on my own and then married, I’ve had to make hard decisions of what to leave behind, give away, and sell. The biggest collection I’ve carried with me are books. Boxes and boxes of them. Books on a shelf ground me; there’s an categorized chaos within the clashing spines and curious titles that brings me comfort.
Even so, my collection began to outgrow my capacity to store it. Boxes of books were piling up and Mike was getting annoyed with having to move so many of them all the time. I needed to let go. So I started a purge.
We live in intentional community. In the city. In a 1920s Chicago hotel. In very small rooms. Ours is maybe 8×8. Our daughter has her own smaller room. If they were clean I’d have taken a picture for you. We are constantly downsizing. We’ve been called to this lifestyle, we chose it, and it suits us. But it still requires an awareness of what surrounds us, crowds us, and distracts us. We don’t have an attic or garage to store baby clothes and toys, yearbooks, cassette tapes, records, and CDs from back in the day.
There’s a fine line between owning things and things owning you. We have to make intentional decisions about what we want to be connected to, what we want to be anchored to. The less we have, the less we have to maintain.
We needed to be intentional about how much we were spending, what we were purchasing, what we were storing. It’s a daily battle and the stuff keeps piling up and we have to remind ourselves why we live this way.
Jesus People USA’s reason for moving into an impoverished neighborhood 44 years ago was to be close to the poor, live among them, live on a similar economic level. We wanted everything about how we lived to reflect our love for God and the people around us and we didn’t want stuff and money to get in the way of that.
Simplicity requires awareness and an inner dialogue, it’s a conscious choice to make every thing in your life serve a purpose, meet a need, and benefit not only yourself but others.
I’m still a collector. I’ve thinned out my herd of books to accommodate new ones and stop overcrowding, but I like to surround myself with little things. I have a shelf with cubby holes in it and a ledge around the room for my found objects. They’re not just random vacuum tubes, trolley gauges, and farm scales. They’re each a memory, an experience. They each tell a story. And I love sharing those stories. Come by sometime and I’ll tell you how I acquired the exit sign over my door.
What collections are starting to crowd you? What need are your things meeting? Is there meaning and story attached to the things that own you?
Here is “1980,” a playlist I put together for you:

I did not have any idea what to expect. END_OF_DOCUMENT_TOKEN_TO_BE_REPLACED

The Breakthrough to Community

10 thoughts on “Simplicity and Meaning”