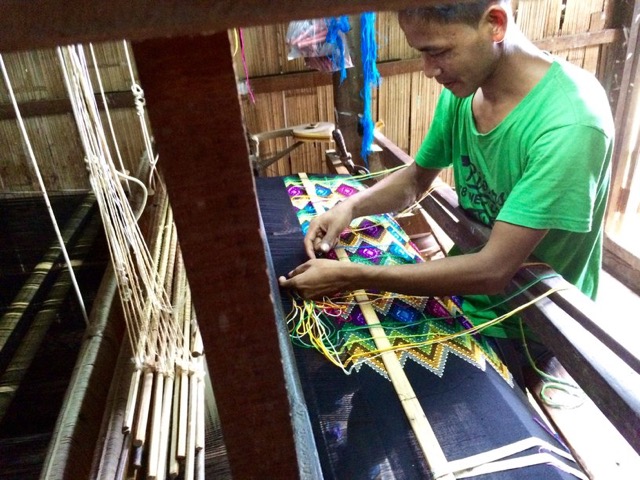 The sound can be heard along the backroads of Aizawl, a hillside village in Mizoram, India—the clacking rhythm that hints of life inside hollowed-out buildings with broken windows and lockless doors. Cooled only by the shade of jackfruit trees, Burmese refugees work to provide for their families, surviving on pennies per day. Liana sits inside an unfinished brick warehouse, dwarfed by the loom that takes up half his family’s small living space. There are four other families here with him, each tucked away and separated by only splintered pieces of wood and frayed curtains.

The closest running water is a nearby stream, a small stove is used to prepare whatever food might be available, and a few bare light bulbs struggle to illuminate the cavernous structure offering little in the way of creature comforts. There are at least a half-dozen looms in this place alone, all used to make traditional Mizo fabrics sold by vendors at a nearby market.

In many ways, his presence at the loom is like Mizoram’s presence in India. Quiet, unassuming—and persistent. For Liana and his wife Haemi, this week is a better week. “We have some fresh vegetables from a garden I planted on the hill,” he says with the hint of a smile. And this week, they have sold a good amount of their hand-loomed fabric. The couple escaped human rights atrocities of Burma in 2011 to find sanctuary. Shortly after making their home in the hills of Aizawl, both battled constant sickness. They finally went to a doctor, and both tested positive for HIV.

Today, his wife is at the stream. And he is at the loom. Lucy is there too. Lucy, a former nun turned betel-leaf chewing renegade with a tangible Gospel. Years before, she opened her arms to children with HIV—children others had abused and abandoned. There is Andrew, the young man taken in by a leper as a child when an orphanage threw him away like a bag of dirt, and Neihi, the young woman infected by her father and ravaged by his friends like a ragdoll.

Lucy sees in them precious patterns when others could only see raveled threads. And so it is with Liana and his family. Like the fabric on the loom, Lucy sees the patterns emerging. And so today, she is there with him as he tends to the loom and cares for his children. She is there with medicine, there with formula for their infant son, there with presence and prayers and peace. She is there, with arms outstretched no matter what finds its home in them.

She makes no demands. She just sits and tends to him as he tends to life. And together, they persist. Liana and the loom. Lucy and the Gospel. What faith those who loom have to know the warp and woof will result in beauty as they keep moving single thread back and forth. They are so attentive to the present, and quick to make adjustments to keep the rhythm of the loom going. It’s a beautiful sound, the clacking, measuring time not in moments but in revelation.

I watch them as the sun finds its way through cracks in the walls, and wonder if I would see the patterns so clearly, if I would find peace in the loom and the thread and the relentless clacking. Every line, woven in and out and pressed into place—the fabric “beaten up” to reveal its design. Liana has lived the beating up. So has Lucy.

I long to stay in this place where there is nothing but the persistence of faith—and my knees grow weak when I think about my homeland, where noise drowns out the clacking of the looms. I ache for faith that becomes sight in the beating up, for a Gospel that says my raveled threads are divine designs. A Gospel that lets my outstretched arms embrace whatever finds their home in them. A Gospel that glories in the persistence.

The rain falls gently outside as Lucy wraps another betel leaf around raw lime. In the quiet of her home, away from the looms, she looks at me. “Let me say this one thing to you. There is no need to write this down. But remember this. God is looking for those who aren’t afraid to follow, no matter the cost to our security or stability.” She leans in. “There are few people God can truly send—true people who will move as He wills. You are one of those people. We are alike in that way. Don’t be afraid.”

It is there—in her words. Faith revealed in the beating up of the threads. Persistence has found me, and my arms open wide. The Gospel is there. It is in me.

Writer at Ronne Rock
Ronne finds joy in telling stories that change stories. She’s a writer, blogger, and speaker – sharing wisdom about leadership, the power of advocacy, and finding God in the most beautiful and painful of circumstances. Her blog is filled with personal moments as a ChristStumbler, an adventurer who finds home in dirt and diesel, and a girl who delights in kitchen therapy. She’s writing Building Eden, a book about women who believe in the reality of restoration on earth as it is in heaven, and is collaborating on For You, Love, a multi-volume series of love notes inspired by the Epistles.