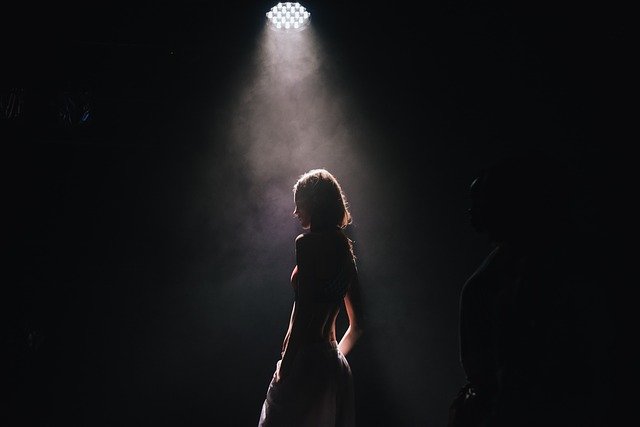 I do too, sometimes.

I’m in a packed-out bar sitting at a table, elbow-to-elbow, with my closest friends.

The burly man on stage does tap-“check-check” as he tiptoes around some electric guitars, an upright piano, maybe even a few drums, and then slips into the spotlight.

“C’mon down!” he proclaims with a voice like it’s a monster truck rally instead of open-mic night. The crowd roars. They’re primed and ready for the drama that is live performance: the birth of a star or, alternatively, it’s collapse into a black hole.

THIS is my cue. Up to the stage I stride, to the bewilderment of my slack-jawed friends who thought they knew the extent of my amazing-ness. (They didn’t.)

. . . because NO ONE alive should try to cover an Alicia Keys song.

Depending on the daydream, or maybe even what’s on my (real) playlist at the time, I swivel on the piano seat with Alicia Keys-moxy or strap on a Gibson, St. Vincent-style. I belt out a melody like either/or; it doesn’t really matter because it KILLS.

The crowd erupts in applause. Tears trickle down my friends’ faces, washing them over with a renewed sense of admiration for me . . .

and the rest is history.

Sad. I know. Not because in real life I can’t carry a tune, or that monster truck rallies should never be employed as similes, or because NO ONE alive should try to cover an Alicia Keys song. It’s not even that I am compensating for some deep friendship insecurity. It’s sad because I went there, many times: I’ve played this pathetic rerun in my brain FOR YEARS. There are others—a Netflix-ish collection that roams rent-free in my brain. And, yeah, some of their ratings might be slightly more than “G”.

I see you sitting there in judgement; but before your smirk migrates to a scoff, answer me this:

Because we’ve all got our stamped passports from a parallel universe or two:

Staycations that resuscitate us from the dregs of reality and the eternal spring of dirty dishes in the sink. In empty cars, lingering with the stench of abandoned backpacks and after-school angst, we seek our own fortresses of solitude. Or maybe we find it in those moments of silence after our heads hit the pillow, before sleep ferries us onward. If not there, perhaps it’s just around the corner on that lunch break walk. Wherever we find it—and we always do—we’re transported to a netherworld of anything-but-this. Here, in the fleeting moments of peace from an overloaded existence, we steal away . . .

“The unlived life.” These are Olivia Colman’s words, not mine. I wish they were. (Or, rather, they are “borrowed” from some brilliant writer on The Crown.) Colman, as Queen Elizabeth II, is caught in a moment of juxtaposition. She weighs the simple private life she longs for (raising horses) with the public life she dutifully lives (riding horses, in parades, as the ruler of the United Kingdom of Great Britain and Northern Ireland . . . Head of the Commonwealth, Defender of the Faith, etc. etc.)

You don’t have to binge-watch The Crown, or even follow the Windsor’s non-fiction storylines to feel the weight of these words. It is the tension we all experience living in the crosshairs of the life we expect and the life we have: A fascinating and furious tug-of-war between obligation and personal choice, human frailty and freedom. It ends with the triumph of the human spirit for some and as tragic train wrecks for others. The unlived life prompts us to push beyond the obvious questions, like, “How is horsemanship THAT fun?”, “Are monster truck rallies still a thing?”, or “Really, Charles? Andrew?”

“What does this unearth about our longings,

He wasn’t exempt either. This was not some actor playing a disgruntled monarch in a miniseries, but King Jesus. At the dawn of his public ministry—in the wilderness—Satan dangles tantalizing versions of the unlived life before him like an ’80s game show:

“All this can be yours,” U2’s Bono paraphrases Satan, in exchange for Jesus’ worship: “The kingdoms of the world and their splendor.”2 Just prove your power in heaven and on earth. Turn stones to bread. Command your angels to break a free-fall. Show your divinity.

It’s in moments like these that the unlived life turns from easy to irresistible. We find a wide and well-paved bypass around the narrow path of pain ahead. Temptation teams up with instant gratification, promising a life-giving supernova that collapses instead into a lethal black hole.

“All of this can be yours,” echoes Bono. “Just give me what I want and no one gets hurt.”

Three times Satan wields the unlived life at Jesus. Three times Jesus speaks truth to illusion. “It is written . . .” He responds and resists.

The scene changes as the twilight of Jesus’ public ministry draws near. Desert fades to a garden, but the plot is strangely familiar: Jesus again stares down the unlived life, this time in Gethsemane. Face down, sweating blood, He pleads with his Father to take away the cup that will leave him hanging tortured and abandoned, bearing the weight of humanity’s sin. It is a cup of sorrow, humiliation, agony, and indescribable loneliness—and He doesn’t want to drink.

He doesn’t have to. But he does. Instead of a way out, Jesus forges a way forward to the cross with words of surrender: “Yet not as I will,” he tells the Father, “but as you will.”3

Although we yearn for the light . . . we find instead that the pattern of our human life means living between both dark and light in a process that is never simple.”4

Carol coasts up to the house a few minutes early.

So, she leans her bike up against the backyard fence, slips up the deck stairs, sinks into a chair, and contentedly waits for me. After a few minutes, a man with a quizzical look emerges from the side of the yard. He hesitates, and then with a reserved, but polite tone, the deck owner inquires, “Can I help you?”

Moments later, she leans her bike up against the right fence, just one street down. We’re doubled over in laughter as she speaks of plushy deck chairs and the pond view she’ll never again enjoy in a stranger’s backyard.

I think of the greener grass there,

of the celebrated who pine for anonymity,

of living between light and dark,

so that we could truly live.

To Him be “majesty, power and authority . . . before all ages, now and forevermore! Amen.”5

“Then Jesus again spoke to them, saying, ‘I am the Light of the world; he who follows Me will not walk in the darkness, but will have the Light of life.’” (John 8:12)

Fog rolled in last summer, hovering outside my window above END_OF_DOCUMENT_TOKEN_TO_BE_REPLACED