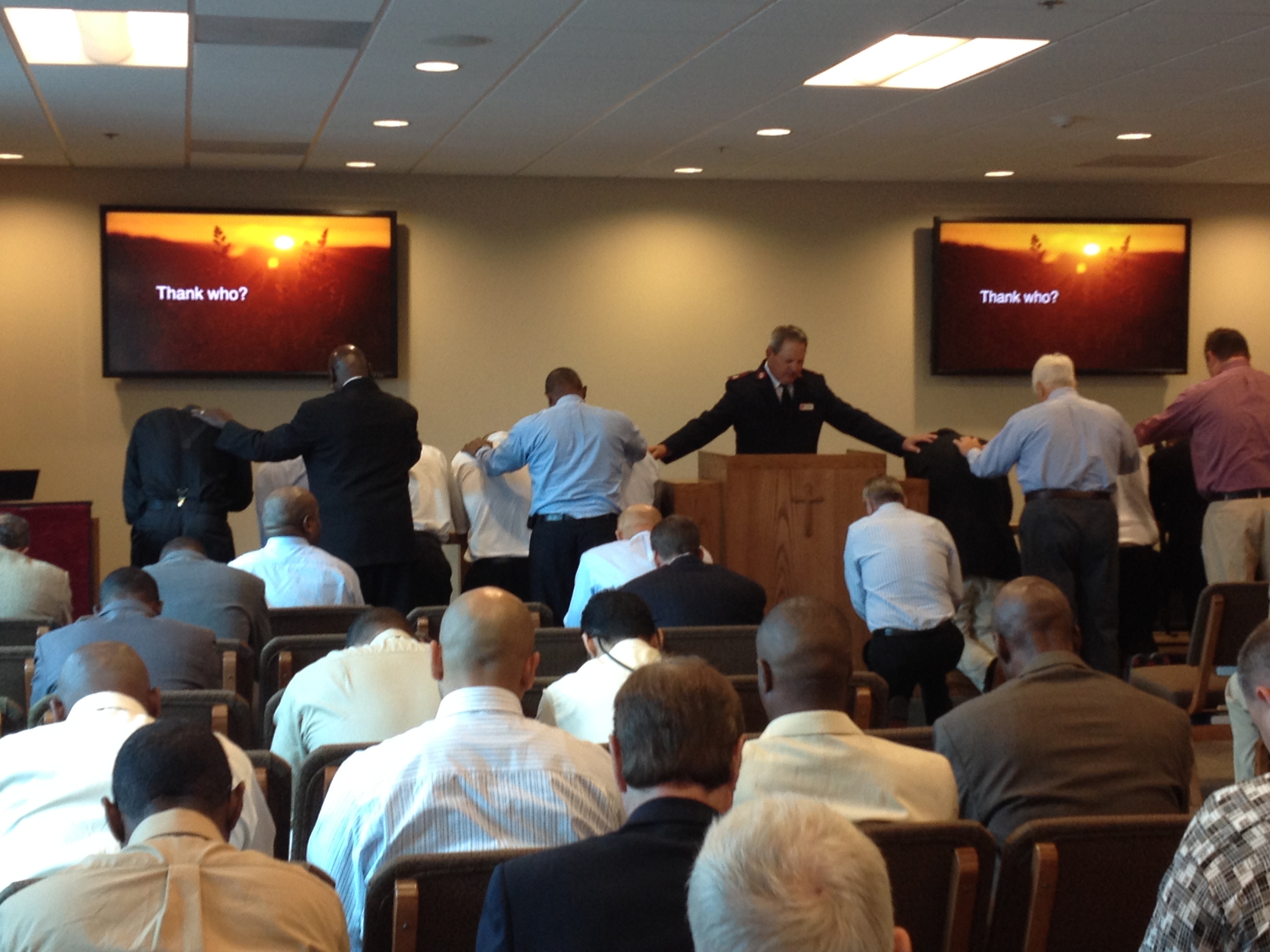 I saw his grizzled face, breadcrumbs around his dry mouth, as he offered a smile that looked genuinely happy to see me. I returned the smile that probably showed more concern than joy. He didn’t look well, not like the last time I saw him. He was much thinner, unkempt, but his eyes eager to be seen, to be welcomed “home.”

He’s not the only one I’ve seen worse for wear lately. Jay is still too thin after being back a month or so. Joe looked good but he’s just come from jail and detox so he’s had time for life to brighten his face again.

This is our work.

Monday through Friday my husband starts early with the house of 90-100 men living in this residential center. He tells a few jokes and they vote thumbs up or down, or a hearty laugh at some and groans at others. Announcements are made, new folks welcomed, prayers are said.

Five days a week they start this way, these men who had no place left. Some will leave after they’ve had a few weeks of good meals and a good sleep in a real bed. They’ll believe the lie in their mind that they’re better now and this time will be different out there. Or that they have one more run left in them.

Whether they leave or stay, for this moment, they’ve been rescued.

There are few who speak of being delivered from their addiction. The kind of deliverance church folks talk about when they said God delivered them from smoking. They put the pack down and that was the end. They never had a desire for another cigarette.

Can’t say as I’ve heard that in our twelve years of working with folks in recovery. I believe it happens, just not often.

The way we’ve seen it, deliverance comes one day at a time.

Sundays my husband is at the pulpit, I’ve planned the service and we worship with this unlikely group of seekers. I sit in our small chapel, large enough to hold our 100 men and an extra twenty or so. They come in wearing the clothes we’ve given them: all in ties, some in full suits. Their shirts are always tucked, their hair groomed, faces shaved . . . we start with the small changes. My husband tells them they look like a room full of doctors or lawyers and collectively, they know plenty of doctors and lawyers.

Those sitting up front will get called on to be ushers and collect the offering. Occasionally one will need to make change from the offering plate and we wait and smile at their generosity.

Another will read the selected scripture for the morning. It’s as if I have a front row seat to God’s redemption story watching these men labeled addict, alcoholic and thief be part of this time of worship. Yes, they’re required to attend and some will be pulling their ties off the minute they’re out the chapel doors. Some will not hear a word of God’s message. But this is not for us to decide. Ours is to be obedient to sharing his message of hope and every one of us in that room needs hope.

Redemption was just a word to me before we became part of this community.

It was one-dimensional theology, a belief but not one made of skin and bones. I suppose that’s a byproduct of growing up in the church and hearing things without seeing them. Or maybe they were in front of me but I needed someone to say, “Look! That’s redemption!” I can be thick that way.

When we have a time of sharing I hear them speaking words of rescue and faith as they say things like:

“My addiction has taken me to multiple suicide attempts the past year. I knew I would be welcomed here.”

“I’m working on step 4, where I walked away in the past. It’s hard but God is faithful and leading me closer to him.”

“Twenty-eight years of jail, prison, detox, and psych wards but I’ve gotten a foundation here and my faith and gratitude are growing.”

“I have 3 months clean, still a baby, but I’m taking a chance on God and recovery.”

Their simple faith is rescuing me from cynicism and judgment. From not seeing past the sign the panhandler holds.

They are delivering me from despair to hope.

Debby Hudson
Writer at Debby Hudson
My husband and I are ordained ministers working with men in a residential recovery program. I like my tea sweet and my music loud. If laughing were a sport I’d be a champion.

2 thoughts on “Rescued and Redeemed”