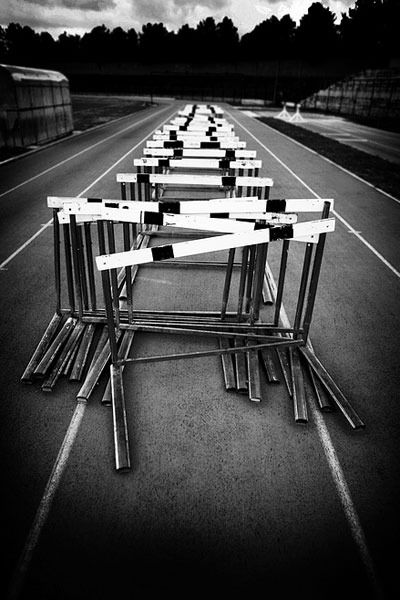 I have never been a very good runner. In the short time that I tried to run, I was pathetically slow, did not have very good form, and managed to injure my ankle.

That is mainly the reason why I find the Bible’s beautiful running metaphors to be about as effective as the ones about cultivating vineyards. I’m just an indoor girl with indoor interests. But not everyone in my family is like me.

When I was growing up, my mom’s younger brother, my teenage uncle, lived with us. He was the epitome of cool: a tall, attractive Afro-Latino (6 feet!); a great dancer in the age of disco; a drum player in a band; and a fast runner. In fact, he was such a great runner that he ran the 400-meter hurdles in the 1984 Olympic trials. He did not qualify, but he came a long way for a boy from Guatemala’s Caribbean coast who had had little formal coaching. And we celebrated his participation as if he had been awarded a medal.

In my memories, my uncle is perpetually young. He is twirling my brother and me around the living room to the rhythm of the Bee Gees’ falsetto voices, or he is beating time on our heads whenever he is listening to music and not dancing. Or he is smiling on the phone while he smooth-talks one of the many girls who called our house. Or he is speeding out the door in his running clothes.

That is how I remember my uncle’s name, history, and personality. That was him being fully himself in the freedom and vitality of his youth. I am glad that I remember him that way, because eventually we lost him.

No, he did not die, but he gradually stopped being less and less himself and became more troubled and unsettled. He would disappear, at first for weeks at a time, and then for months. One day we found him living among homeless people as if that were a normal way for a person with a family and a home to live. He talked excitedly about his many delusions and was reluctant to come home with us. He did but only stayed a short time, long enough for us to tell him his mom, our abuelita, had died. He did not react, and a few weeks later he got on a bus to New York City. I have not seen him since that day.

Sometimes when his name comes up, one my relatives will say that he was just a weird guy or a lazy man who did not want to work or perhaps he consumed lead paint chips as a child, and they damaged his head. Few want to admit his obvious mental illness.

The Stigma of Mental Illness

Like in other cultures, there is a stigma around mental illness in many Latinx communities. In fact, comedian George Lopez does an entire bit about the “crazy” relative every Latinx family keeps hidden away in the house. I have also heard my relatives brag at times about the fact that we do not have mentally ill people in our family, when we clearly do–most will just not seek a diagnosis or treatment. Psychology is not really valued in the culture, even where it is available.

And I think it was this stigma coupled with the church’s penchant for treating mental illness like a spiritual problem that just requires more prayer and “surrender” that kept me from getting help for my own depression and anxiety for years.

I was ashamed to be someone who was depressed and anxious, so I told myself that I wasn’t. It was a lot like a child covering her eyes with her hands and then telling everyone that she is invisible: it simply did not change the facts.

I was deeply depressed and at times had so much anxiety that I could not sleep because I felt so keyed up all the time. Ironically, I thought that any medication would keep me from feeling like myself by dulling my senses, but I was not myself at all anyway.

Among the many tragic aspects of untreated mental illness is that people lose their very selves or those that they love. Just as my uncle became someone I did not recognize when he descended into mental illness and refused treatment, I was losing myself, too.

So in those times that I felt a little better, I tried adding: more journaling, more meditative prayer, more sunshine, more walks. When that did not work, I tried subtracting: less coffee, less sugar, less TV, less napping. Anything to avoid a diagnosis and medication. And while all of those things helped a little, none of them helped entirely. Mostly, it all left me feeling like a failure.

What Does the Bible Say about Mental Illness?

All of this distress and frustration prompted me to seek answers in the Bible and biblical background and commentary books. I found that there are those theologians who believe that the story of the Gerasene demoniac in Mark 5 is a passage about mental illness rather than demon possession. There are also those who say that Mary Magdalene, described as being cured of her possession by seven demons, was instead healed of a mental illness, before she became a follower of Jesus (Luke 8:2).

Some biblical scholars will also point out that in the Hebrew Scriptures, Hannah and Elijah the prophet both struggled with severe depression (1 Samuel 1 and 1 Kings 19, respectively). Nobody is completely sure, however, because there was no framework for understanding mental illness in the ancient world of the Bible. Everything was understood, correctly or not, as having a connection to a spiritual reality.

My research was by no means exhaustive, but the most helpful thing it taught me is that mental illness is, in a way, a picture of the human condition–it is emblematic of so much of life:

We were created to be fruitful and multiply, but many families battle infertility

Were created for love and community, but we have all had fractured relationships.

We were created for mutuality and equality, yet we live under the heel of patriarchy.

We were created for wholeness and health, yet many of us have sick and weak bodies and minds.

In short, we were created for shalom, for flourishing, for life abundant in God’s good creation, but we experience so much brokenness, suffering, and loss in this life.

The writer Glennon Doyle Melton once posted a tweet in which she had rewritten the words to a popular children’s song: “Jesus loves me this I know, for he gave me Lexapro.” While amusing, there is a profound truth in her words: God’s love and healing may very well come to us through the inventions of modern medicine. In her case, through a drug used to treat anxiety and depression.

While it is always good to pray for healing, it is equally valid to recognize that God’s healing may come through therapy and medications.

These days I have found balance and equanimity through a combination of things, including medication. I no longer carry the shame and stigma that both my culture and the church foisted on me. I still think about my uncle and keep a picture of him on my night stand. It reminds me to pray that he will also be able to cast off the stigma. I hope God has brought him healing and peace, either through supernatural or natural means or a combination of both. I would love to see him run and fly over those hurdles again, restored to wholeness.

Dear Portia: How Do You Stay Sane with a Mentally Ill Person?

A Letter to My Brother with Mental Illness

6 thoughts on “Hurdles to Healing”