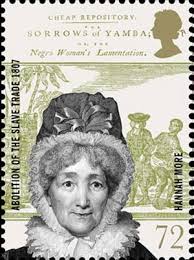 Surely no one expected anything to come of the fourth daughter born in 1745 to the poor school master of a charity school in the tiny village of Fishponds, outside Bristol England. Girls, particularly those of the working class in the highly stratified society of eighteenth century England didn’t have great expectations. Most of them didn’t even get a decent education.

But Hannah More—the name of this obscure girl child—was lucky enough to have been born to a father a man skilled and humane enough to feed this girl’s insatiable hunger for learning—even beyond what was typically taught to girls in those days. Hannah’s natural aptitude bloomed under her father’s instruction—her first foray beyond ordinary.

The times were ripe for young learned women like Hannah and her sisters (there were five More girls in all) to transmit their own learning to others. Bristol’s burgeoning middle class had produced families who wanted and could pay for good education for their girls, so the elder More sisters opened a school of their own in 1758. Here Hannah honed her literary skills by writing works for the school’s pupils and poetry that would be read and praised by some of the city’s most fashionable and influential citizens. The ordinary girl was obscure no longer.

Soon Hannah was courted by a gentleman related to some pupils enrolled at the More sisters’ school. It seemed a perfect match, the pair became engaged. But the marriage was not to be. After three bouts of cold feet on the part of the prospective groom, Hannah gathered up her remaining dignity and broke off the engagement. As was ordinary at the time, her former fiancé provided Hannah with an annuity that gave her financial independence. A wife she was not to become. But a writer she would be. She turned ordinary heartbreak into extraordinary opportunity.

Soon she was off to London, to seek her fate as a poet and playwright. The dramas and verses she’d written back in Bristol preceded her, and the famous and fashionable of London greeted her with praise and delight. Her first play was produced on the London stage in 1777. This was followed by another play and more poetry, along with endless dinners, teas, and parties.

But these extraordinary opportunities did not satisfy Hannah. She loved the simple life. She loved flower gardens. She loved her God. She loved, too, the poor, children, animals, and slaves—all those ordinarily overlooked and abandoned in that age.

Hannah withdrew from fashionable society. She befriended some of the most devout Christians in England at the time, including the ex-slave ship captain John Newton (author of the hymn “Amazing Grace”) and the Member of Parliament William Wilberforce. These three joined forces with other like-minded friends to campaign for the end of England’s slave trade.

It took many years, but they succeeded.

Fog rolled in last summer, hovering outside my window above END_OF_DOCUMENT_TOKEN_TO_BE_REPLACED

Karen Swallow Prior
Professor at Liberty University
Karen Swallow Prior is the author of Booked: Literature in the Soul of Me (T. S. Poetry Press, 2012) and Fierce Convictions: The Extraordinary Life of Hannah More—Poet, Reformer, Abolitionist (Thomas Nelson, 2014). She is a Research Fellow with the Ethics and Religious Liberty Commission of the Southern Baptist Convention, a Senior Fellow with Liberty University’s Center for Apologetics and Cultural Engagement, and a member of the Faith Advisory Council of the Humane Society of the United States.

Latest posts by Karen Swallow Prior (see all)