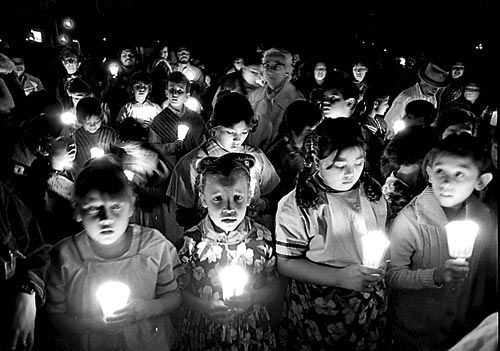 Thus has Advent birthed representations in images, narratives and rituals. Many are linked to the journey of the Holy Family, looking for lodging and turned away. Celebrants have been known to put a candle in the window, leave a place at the table or the door unlatched for strangers seeking shelter. The custom of Nativity crèches (said to have been invented by St. Francis) is woven into many Advent traditions, sending sculpted figures on a journey around the church or house on their way to the stable, where the crib gets its occupant on Christmas.

A four-hundred year old Mexican Advent tradition began as a teaching tool of European missionaries and as a replacement for pagan religious traditions. Las Posadas, a nine-day celebration, features a caminata (pilgrimage) led by Mary and Joseph, portrayed in pictures or statues or by costumed parishioners—often children and/or accompanied by a figure dressed as an angel. A guide carrying a candle in a paper shade leads the nightly procession from December 16-24. The narrative is carried in songs and responses as the pilgrims seek a posada (inn, lodging) and are turned away by the innkeeper. At the last house, the Holy Family and fellow travelers find welcome and enter to songs, prayers and holiday festivities. The tradition includes particular songs, foods and drinks, and nightly star-shaped piñata.

My own Chicago neighborhood would make an apt setting for a multi-level celebration of Las Posadas. Uptown has been known as a entry port for immigrants, seeing many waves of new arrivals—whites, blacks, Latinos, Native Americans, Asian “boat people,” Sudanese “Lost Boys,” Russian Orthodox and Middle Eastern Muslims, plus young people, not a few runaways, escaping old rejections, subject to new ones. Indeed, the neighborhood is shaped also by rejection of this great diversity of travelers, not least in evictions, gentrifications and loss of affordable housing. Homelessness remains a defining feature, concern, and battleground in Uptown. Posada is also translated “shelter,” and Uptown has many kinds, for the homeless, the mentally ill, for others seeking refuge from an often cold and hostile world.