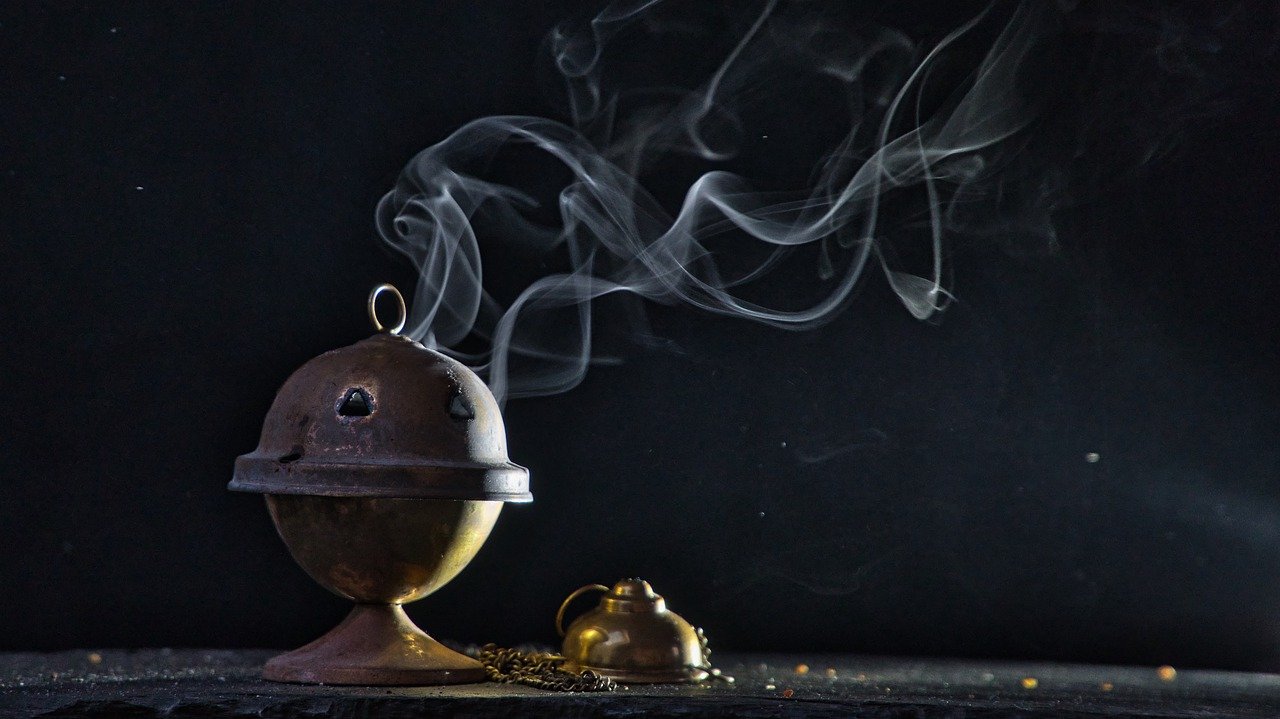 They are inside all of us, buried deep inside our subconscious—these moments of impact. There are places, people, and events that changed who we are becoming. When our lives bump up against something that challenges us or deepens our understanding, we become the sprout that branches off an old limb. Over time you don’t see where the new life began, for it is part of the whole, yet this shoot did have an origin and it changed the life of the tree completely by springing into existence. For me, it is often a fragrance that often brings these pivot points back to the surface.

It was my daughter that first noticed what was to her an offending scent. She wrinkled her nose and covered her face. Turning to see what she was referring to I saw someone carrying a thurible into the church, the small golden incense burner that hangs from chains and swings to release the smoke into the sanctuary. The smell of Frankincense startled my senses and I gasped. What was new to my daughter brought back a well of fourteen-year-old memories flooding through me. I turned to my husband, suddenly that young bride, full of wonder again, and cried, “it smells like Egypt!” He smiled and nodded and I knew he was back there again in his mind, too.

The six months we were part of the Coptic church in Egypt transformed us, one of those points in our lives where we diverged from who we had previously been into something altogether new. It was a phase of life in which every new experience overwhelmed us. I dwelled inside the memories in those moments sitting in the church with my family on Christmas Eve. I was transported to the stone walls of another church where my faith exploded into fresh places.

Nothing in my evangelical upbringing prepared me for seeing the demon-possessed woman writhing on the floor during the healing service at The Cave Church. My Western theology had no space for the quiet, yet forceful priest who commanded men in wheelchairs to stand. I watched in skepticism as thousands of people, Christian and Muslim alike, flooded through the village that housed all of Cairo’s garbage collectors and mounds of trash to the monastery hidden inside the recesses of Mokottam Mountain.

All skepticism evaporated like the smoke rising from the incense burners when I met Abouna Samaan, the man who the community called Father and who truly treated each person who came to him like a beloved child. A week after first meeting him we were on a bus with him and dozens of church members headed out into the desert to the retreat center under construction. Here we were, were two total outsiders, welcomed directly into the fold of the largest church in the Middle East.

We spent the week amusing laughing children with our attempts at Arabic songs, listening to stories of lives changed, exploring a church rising out of the desert sands, and generally walking around in constant wonder. Everything was new and startling—the Arabic words of mass and the head covering I donned to kneel for communion received from a long spoon from the chalice of wine. We sat through hours-long youth services full of familiar worship songs in an unfamiliar language, and I was stunned when the microphone was shoved into my hand to lead a song mid-service.

We sat stunned at breakfast, our beans and eggs growing cold, listening to Abouna tell us his epic story in broken English—his story that was recorded in books and articles: how he came to the impoverished city at the insistence of the voice of God, how they started meeting amidst the garbage in nothing but a tin shed, and how they grew to need the amphitheater that now seats 20,000.

I was snapped out of the deluge of memories by my son asking about the meaning of the incense. It was my family’s first time in an Episcopal Christ-mass service. I needed to remember that my kids were experiencing something new, something that could shake them out of their current understandings of God and the church. I started telling them about Egypt and about why some churches burn incense in services.

Since they were young I’ve taken them to places that stretch their understanding of the world, of their place in it, and of God. I never wanted my children to be stuck thinking theirs is the only way or the right way, as I had for the first years of my life. While they have a church home they regularly attend, they’ve been to a Benedictine monastery and Jesuit retreat centers. They’ve been to international churches and broken the fast with Muslim friends during Ramadan. It is my hope that one day they will catch the scent of Frankincense on the air and it will remind them of a time when they saw God as bigger and more beautiful than they had imagined.

We had a saying we repeated often when we lived in South Asia and the kids would experience something shocking. “It’s not weird,” we’d say, “it’s just different.” We tried to keep ourselves open to those moments of intersection when our lives collided with the unknown, the strange, and the beautiful. Only if we remained available could those moments change us, expand our beliefs and knowledge of ourselves, of the world, and of God.

“And so we are transfigured much like the Messiah, our lives gradually becoming brighter and more beautiful as God enters our lives and we become like him,” The Message tells us in 2 Corinthians 3:18. This is how we are meant to live: constantly evolving. When we live unencumbered by the fear of change and keep the spirit of a learner in our hearts, we will continue this transfiguration, changed by the Creator and by the Creation. What we can yet be unfurls before us, a beautiful fragrance to behold.

From Pauper to Beloved Child

One thought on “The Aroma of Transfiguration”