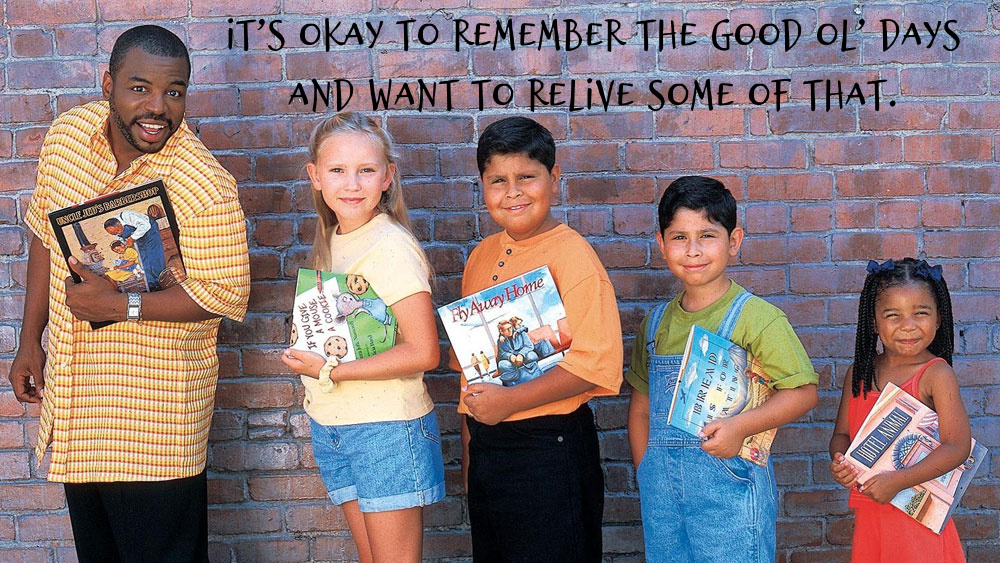 I remember Tom and Jerry, Leave it to Beaver,

and Sunday paper with comics mom cut out and taped on the refrigerator door.

I remember Laurel & Hardy, The Rifleman,

and watching boxing or NFL with Dad in between Sunday services when I was supposed to be napping on the bed or on the floor.

and waking up early not to miss Saturday morning cartoons,

but before we could even turn on the TV,

chores had to be done and that included Bible study.

I remember TVs with no remote control.

We were the remote control and if we didn’t want to get up and change the channel, it was okay because whatever came on next was always rated G.

And we could fall asleep or wake up to whatever was on without fear of someone seeing what they shouldn’t see.

I remember TVs with turn knobs.

I remember at midnight stations would go static after they played the National Anthem.

We all know that happened next.

No more TV. Go to bed. That was tandem.

I remember Sesame Street, Reading Rainbow, and Mr. Rogers in my neighborhood.

I remember Conjunction Junction and learning how to make it function because back then TV supported learning so turning it on was safe. It was all good.

I remember being upset with my folks because the sun was still shining, but they made us come in to watch tv.

Shaka Zulu, Raisin in the Sun, and Eyes on the Prize were nightly specials on PBS and our parents were adamant about us learning our history.

I remember library cards, library books with stickers and due dates –

Babysitters Club series and Sweet Valley High mysteries kept my sisters and best friends and me at the library weekly, making sure we kept up with Claudia and Kristy and the twins and their brother’s secrets and juvenile journeys.

It wasn’t as exciting as Mario and Luigi traveling through the Mushroom Kingdom,

especially because bragging rights came from who did it first and that person was about as special as Fred Savage finally winning over Winnie Cooper on The Wonder Years Teenage Drama.

I remember playing outside from dawn till dusk and no one made us.

Being with one another was more important than being liked or followed.

Conflict resolution happened on the basketball court or in a game of kickball after school and losing was a feeling we had to swallow.

Speaking of kickball after school, going to school was a privilege, yes, a right, but a right that had only been granted to people of color within the last century.

And it was not free. It came with a cost: marching, protesting, Civil Rights Acts, and Brown v Board of Education for all of us to attain educational opportunities.

I remember a time when school was sacred, learning was optimal, and teachers were respected by everyone in the community,

and not because they were experts or flawless, but because they partnered with parents to salute children passing through their classrooms into the land of economic opportunity.

School, along with church, only reinforced what moms and dads taught at home,

so, moms and dads were the first authority.

Parents and teachers became co-laborers raising children together, because teaching doesn’t belong to one person; it is supposed to happen within the context of community.

So, between home, school, and church, kids lived in safety

because they were getting one message from all three:

Education is the only fiscally responsible way to graduate into adulthood

to live and give back to society.

This is why I baffle at music videos and cringe at the lyrics that our kids listen to because it all seems to promote glamour with sex, drugs, violence, and even prison.

The message being accepted is the streets are the teachers and prison is the goal because lyrics glamorize division.

I remember when prison was a place for criminals.

And no one even mentioned if they knew someone behind bars.

It was embarrassing to have a family or friend in jail because people assumed guilty by association; there were no bragging rights but tv, music, and social media have turned criminals into stars.

And I miss the music of my day

when lyrics were birthed out of life lessons meant to educate not degradate, and mistakes were owned to bring about a greater good.

Now it’s a mistake to be good

because music has our kids convinced the bad are misunderstood.

and Merriam Webster only reinforced what Jesus already told us in Scripture.

We weren’t waiting on the nightly news to tell us what to think or how to think.

Our times in the Word had already laid out the beginning and the future.

Morals were sought after. Showing respect was honorable like pulling over to the side of the road for a funeral procession.

I remember learning how to drive and being taught that protocol

because you don’t have to know someone to respect them; that’s misinformation.

I remember when kids respected cops.

Wearing blue was symbolic of heroism and service.

but without a mom AND a dad to teach, kids see cops and get nervous.

What if the outliers didn’t represent the totality of a group,

like how one bad teacher doesn’t mean we should shut down schools?

What happened to seeking common ground by using common sense?

I remember a time when life was simpler, and we lived by those rules.

It’s okay to return to practicality.

It’s okay to live life away from the staunch demands of hatred and political tyranny.

It’s okay to remember the good ol’ days and want to relive some of that.

It’s okay and in some ways even right to live with simplicity.

Remember kids stopping the truck to run in and get money from mom and dad?

I wish the streets were still safe and they literally can be.

We can return to “In with the good” and “Out with the bad.”

It’s actually nothing we even have to memorize.

It’s acknowledging that without Christ as our Rock and Foundation,

we’re building the next generation on sinking sand and demanding that they thrive.

We owe the next generation more than we inherited

because good parents want their children to have far better lives.

That’s why Jesus said after His earthly departure,

“Whoever believes in Me, the works that you do will be greater than I.”

Let’s not squander and mistake luxury and convenience for security,

thinking if we feel good, we are good.

Don’t be deceived; we aren’t the judges of our destiny.

So, let’s set our affections on eternity.

Fog rolled in last summer, hovering outside my window above END_OF_DOCUMENT_TOKEN_TO_BE_REPLACED

Anita Scott
Poet & Performer at Anita Scott
At some point in elementary school, my mom bought me my first book of poetry by Nikki Giovanni. . .I read that book over and over. What I didn't know at the time was, the Bible is poetry, so I had, in essence, been introduced to poetry even before I knew what it was. I can remember reading Psalms, admiring David, and then taking his praises and laments and turning them into rhyme schemes. Years and decades later, I too began lamenting and rejoicing through the use of rhythm and rhyme and have found poetry to be healing, cathartic, and fun, so much so, I love teaching others how to write poetry and I love seeing faces when they realize, "Whoa. I can do this too?" I have a heart to echo the chambers of Heaven through poetry and hope that others find healing and wholeness as they listen.

Anita Scott resides in Texas, is a Middle School Principal,and loves all things nature: water, trees, mountains, canyons, hummingbirds, and the list continues. She is the 4th of 8 children, born to James and Ruth Scott, and loves to spend time with family and friends.

The Scarcity of Enough