Confession: Sometimes I watch “Keeping Up with the Kardashians” just so I feel better about my own life.

I can’t always tell them apart, but there’s something satisfying about seeing Kim, Kourtney, Khloé, Kendall, Kylie, Kris, Caitlyn and Rob weave in and out of drama. (Thank goodness for Rob, as all good alliteration must come to an end.) I know it’s scripted reality TV, but still, I often think to myself:

You’ve waded into some deep water, Nik, but at least you’re not walloping a Gucci bag across your sister’s face at the Bentley dealership. (Or however that one went.)

She’s the one with a resume that would make Tinder blush.

Maybe that’s why I’m so captivated by her. She’s an antiquated Kardashian of sorts, only without a manicured dog—the Samaritan woman who meets the Messiah at Jacob’s well.1 You remember. She’s the one with a resume that would make Tinder blush. There’s a whole lot of potential for shame in this scenario. Next to her, I look like a saint. Saint Nik.

Her life reads like a grocery store romance novel . . . the one you wouldn’t actually bring home.

The scene opens with a travel-wearied Jesus sitting at the well. She joins him to draw water. Her life reads like a grocery store romance novel—the one you wouldn’t actually bring home. Or if you did, you’d stuff it in your underwear drawer. (I’m maybe guessing here.) But our leading lady? She’s an open book to Jesus. Sitting at this ancient well, in this historic space, he sees every chapter. And he speaks.

It’s 5 a.m. in Beijing, and I’m longing for my own brush with the ancient and renown. I down the traditional Chinese antidote for jet lag—cappuccino—and whirl through the hotel’s revolving doors to meet our driver. The city is still asleep. We flow easily through pre-rush hour traffic as the morning sun stretches downward to wake her, but to no avail. She’s tucked beneath an opaque blanket of smog. Outsiders like me might mistake it for an overcast sky. But locals, like our driver, know better:

“Sometimes, when he was a boy, it used to snow here,” my husband translates.

I wonder if the woman at the well ever longed to stay in bed. Did she pull her blanket up over her eyes to hide from the day and all it might reveal?

We exchange city streets with winding roads that contour the countryside. It is here, as we meander northwest, that I catch my first glimpse. I hold my breath at the sight of the stone structure before me. It is nothing short of a miracle.

This Great Wall, stretched over such a span of space and time. It defies reason.

Minutes later, we rush through the gates and scramble past the tourist groups ascending. I skip every other step up the wall, gasp for breath and peel off my jacket. When we finally carve out some distance, we gaze at the impossibility of it all. This feat of human hands and endurance stretches out from where we stand and crests the mountaintops beyond. It goes as far as we can see. 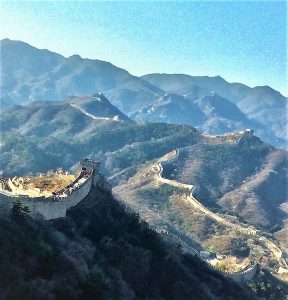 No “blanket” here, I think, glancing southward toward the city. There is no smog in sight. The wall-sky is bright blue and its air, clean. But our moment of awe is short-lived.

“Nik, they want a picture with you,” smirks my husband.

So it begins: my minutes of Kardashian-like fame, with a series of polite approaches, subtle eye contact, and gestures toward phones. I am tall and Caucasian—an obvious foreigner with frizzy reddish-brown hair. Somehow I’ve become the anomaly standing on a 7,000 year old Wonder of the World. I shouldn’t enjoy this undeserved attention, but I do; especially when people ask my husband to step aside to snap the picture.

I could do this all day.

Then she grabs my hand.

We first notice her, the elderly woman with the kind smile, as she sidles in next to me for a picture. She’s trying to take it before I notice. When we realized this is what she wants, we offer. As we stand together and wait for the count “yī, èr, sān,” she clasps my hand in hers. It is soft, welcoming and warm.

If she really knew me, as I know me, would she take my hand? Would anyone?

My shame is classified. Even if you’re really trying, you won’t find it. It’s hidden in an undisclosed location under a pile of thick and dirty blankets. For most of my life, that’s where it’s stayed: undercover. I’ve spent an equal amount of time trying to compensate for it. I’ve curated a profile fit for all-access acceptance into places I want most to belong. And it’s worked except for one hitch: like a slow burn, my shame is silently consuming me.

If she really knew me, as I know me, would she take my hand? Would anyone?

Buried beneath on a bed of molten rock, my shame lies dormant and dangerous. It’s a secret history of pain inflicted, deep regrets, and the fear of repeating it all over again (as history habitually does). And always, always the fear of an unveiling. So I take great pains to keep it covered, and scoff at the likes of Kim, Kourtney, Khloé, and Kendall when I really should be saying, “Move over, every Kardashian ever, combined.” How else do we recognize shame, except that we embody it too?

I think about the wall and all the secrets hidden beneath.

Historical data vary, but this we know, the Great Wall came at great cost:

“Construction workers were a disposable commodity when it came to building the wall. It’s estimated that as many as 400,000 people died building the wall, earning it the sobriquet ‘longest cemetery on Earth.’ Many of the workers who died during the wall’s construction were buried in its foundation.” (Smithsonian Magazine)

He asks her for a drink.

I can almost read her mind as she looks at Jesus.

If he really knew me, as I know me, would he take my water?

Water from a Samaritan (“For Jews do not associate with Samaritans.”2) woman, with five husbands past, one lover present, and no foreseeable future.

AND because he loves her, Jesus flips the script:

“If you knew the gift of God and who it is that asks you for a drink, you would have asked him and he would have given you living water.”3

She says to him, “Sir, give me this water so that I won’t get thirsty and have to keep coming here to draw water.’”

“Go, call your husband and come back.”

And the blanket’s pulled off.

In response to her vulnerability, Jesus flips the script again. It’s his turn to reveal:

“I know that Messiah” (called Christ) “is coming. When he comes, he will explain everything to us” she says.

Flesh-and-blood prophecy fulfilled at Jacob’s well. Living water revealed to a woman concealing her own shame. Love, life, and freedom when the blanket came off.

Maybe that’s why I’m so captivated with the woman at the well: She’s an unlikely saint —someone I can actually keep up with.

In her I see shame and hope. I see glimpses of healing.

I did not have any idea what to expect. END_OF_DOCUMENT_TOKEN_TO_BE_REPLACED