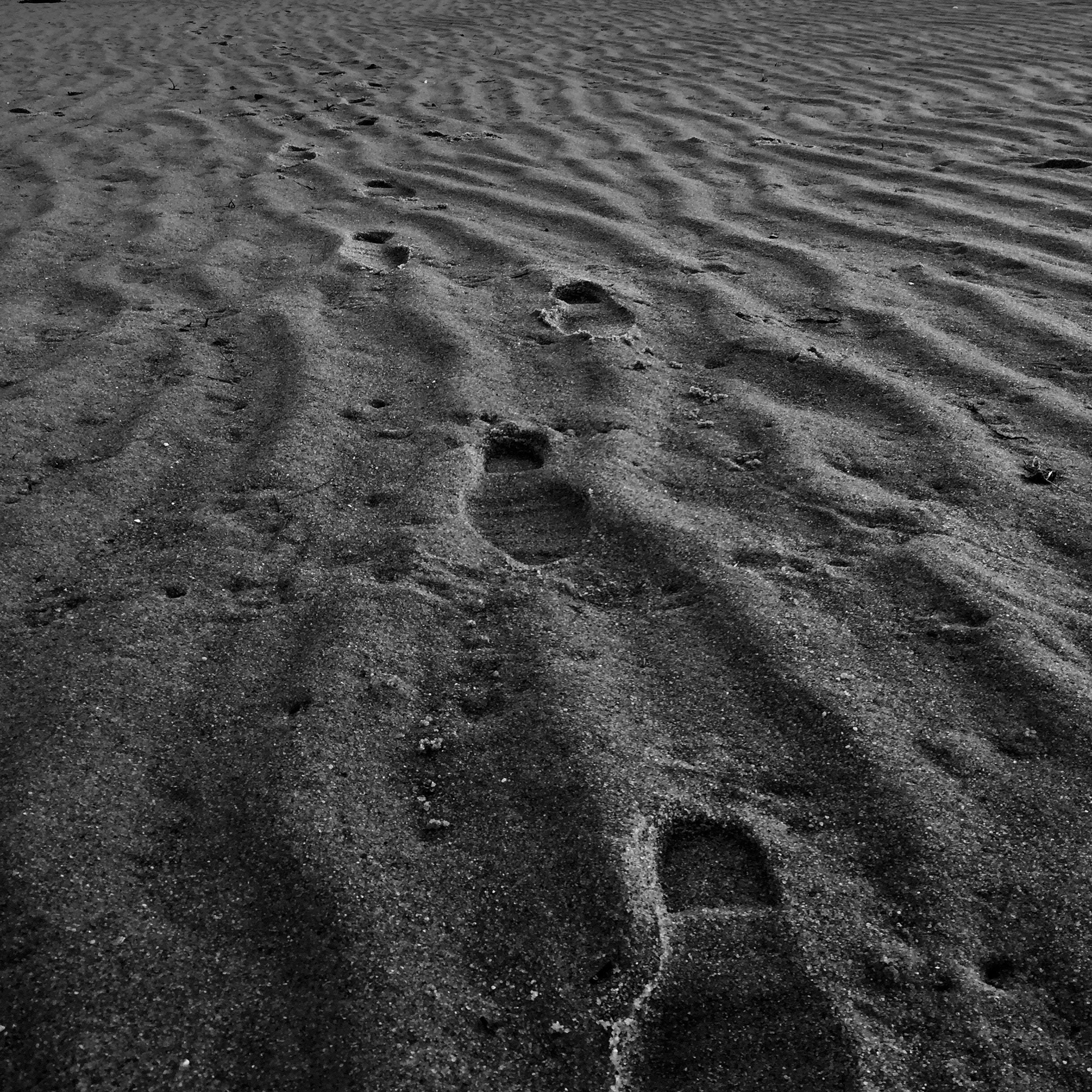 Coming of age in any epoch means WEATHER.

Doing it as a burgeoning evangelical in the late 1900s (as my kids love to remind me) was like sipping a tempest in a teacup. There was no smoking, no parties or swearing for this sold-out Jesus-freak. There were—instead—bad perms, sub-par Christian rock, and not-so-subtle-sweatshirts like this one:

I was the fearless, white blob in this metaphor who assumed the shark would actually move aside. Or so I thought. I refused to build my house on the sinking sands of ’90s culture and instead proudly drew my line in it—abandoning the likes of an Unguarded Amy Grant and other nomads who slipped into SECULAR SPACES.

I was bad-assed (thought not spoken) AND brave as I built my Christian counter-culture, two-story house there on the other side of the line. The only problem? When the tempests raged, it wasn’t resting on rock. Me neither.

I was knee-deep in sand.

You wont find Robert Carter III’s name in most history books but you should.

Not because he was a Revolutionary War patriot, acquaintance of Washington and Jefferson, or a “Who’s Who” among Virginia’s sons. (Carter owned a grand total of 16 plantations. That’s not a typo: 16).

Carter deserves a bold-print shout-out for all of the wrong reasons:

He aggravated his neighbors, exiled his younger children (infuriated the others),

and liquidated large portions of his wealth by his death in 1804. Stellar resume so far, right?

Why then the deserved historical nod?

Because while Jefferson penned a Declaration touting the equality of “all men” and Washington secured “Free and Independent States,” Carter authored his “Deed of Gift”: a legally-binding document that ultimately liberated over 450 enslaved persons on his properties—more than either of the aforementioned Founding Fathers held—combined. It was the greatest emancipation of enslaved persons in the United States prior to the Civil War.

Knee-deep in the sands of a culture that saw slavery and chose to look the other way, Carter ascended to rock.

In 1776, future presidents #1 and 3 hammered a vision of “Life, Liberty and the pursuit of Happiness.” In 1777, Carter HAD a vision of God as he recovered from a smallpox inoculation.

Historian Andrew Levy asserts it “turned his life inside-out.” Carter was, in Levy’s words, formerly a “good, rational deist” like Jefferson. But now he combed the countryside for church meetings and services in search of his Creator. He was baptized by 1778.  In choosing the Baptist Church of Virginia, Levy reports, Carter picked “the smallest, most marginalized, most persecuted sect” in the commonwealth: “The church,” asserts Levy, “of the poor and the enslaved”: hardly the formula for a peaceable, socially-acceptable existence.

Storm clouds hung on the horizon,

and then tempests (not of the teacup variety) raged.

Carter, the master, worshiped alongside the enslaved. Neighbors, relatives, and friends scorned his unprecedented kind treatment of workers on his properties. He alienated some of his children from the evils of plantation life altogether. Finally in 1791, nine years after Virginia law permitted the manumission of enslaved people, he shunned conventional reasoning that saw slavery an an unjust but economic and social necessity and scripted the “Deed of Gift.”

Jefferson wrote that he “trembled” at the injustices of slavery but never worked toward a collective liberation. In his recent CNN article on Carter, Eliott C. McLaughlin notes that Jefferson freed a grand total of only 10 people he enslaved, and Washington waited to emancipate those he enslaved until after his death. Carter, in contrast, aligned with the strokes of his pen, writing in the deed: “I have for some time past been convinced that to retain them in Slavery is contrary to the true principles of Religion & justice, & that therefore it was my duty to manumit them.”

450 in the years that followed.

Unlike many church-going gentry at the time, Carter died to social convention to live his Lord’s words.

Not JUST words. But a deed.

A deed that, Levy insists, came “at the exact moment in American history when proof that emancipation was practical could be conceived as almost traitorous . . .” He stood as an affront to the justification of slavery: “An inconvenient fact,” Levy says, in the compromising rhetoric of his time.

While Washington and Jefferson rose in renown, leaving legacies now memorialized in marble, Carter sank into obscurity—and was buried, by choice, in an unmarked grave.

But not into sand.

His house withstood the tempests of his time. Not because of who built it, but because he rested it on rock. The door was open and 450 were freed.

“As for everyone who comes to me and hears my words and puts them into practice, I will show you what they are like. They are like a man building a house, who dug down deep and laid the foundation on rock.”

August Landmesser is believed to be the man standing (below) with arms crossed in a sea of Nazi salutes. Like Robert Carter, most of his life remains a mystery. German law forbade marriage to his Jewish fiancé, but they persisted in creating a family.

Landmesser was imprisoned for the union while his fiancé endured a string of concentration camps until she was killed. He survived imprisonment but was drafted into the German military. In 1944, Landmesser was declared Missing in Action. His was a life lived in relative obscurity aside from the 1937 photo.

“We’d all like to think we’re that guy,” said Mike Cosper in a recent episode of Christianity Today’s podcast “The Rise and Fall of Mars Hill“—”That we’d be immune to the excitement of the crowd, the aura of charisma, the sense of movement that mobilizes masses of people. There’s a reason,” Cosper continues, “why he’s alone in that picture. You have to know there’s something wrong. You have to know there’s something wrong when your senses and the voices around you and everything life’s already taught you about where to put your faith and trust is pushing the other way.”

“When a flood came, the torrent struck that house but could not shake it, because it was well built.”

I think of August Landmesser,

and shudder as I juxtapose my haughty “Go Against the Flow” apparel with his plain-clothed, quiet stance of defiance fifty years before.

I think of Thomas Jefferson, who wrote of slavery: “Indeed I tremble for my country when I reflect that God is just: that his justice cannot sleep for ever” and did nothing.

And of Robert Carter, mostly forgotten, who did.

I remember others who stepped over sand to weather tempests on rocky ground:

Mary McLeod Bethune, the daughter of enslaved parents shunned cultural convention and, at times, an unsupportive Church to proclaim the imago Dei in humanity from inner-city streets to the White House.

Marilyn Laszlo stepped from the familiar comforts of Indiana to the remote riverbanks of Papua, New Guinea. She lived and loved the people of Hauana villiage, painstakingly transcribed their language (for the first time ever), and translated the Bible for them. Laszlo was often asked if she was afraid: “When I think about the 23 years I have lived in this village,” she replied once, “and most of those years were under a thatched-roof house—I have learned that the safest place in the whole world to be is in the center of God’s will.”

I think, too, of Esther, Rahab, and Ruth.

Staring into an empty teacup,

and head for higher, rocky ground.

For the curious who would like more on Bethune, Laszlo, and Carter:

Born into the storms of systemic racism, Mary McLeod Bethune rose from a legacy of poverty to free those trapped in it. She trained at Moody Bible Institute (the only black student there at the time) for the African mission field. When no missions organization accepted her application, she reached African-Americans instead—establishing what eventually became Bethune-Cookman College. For more on Bethune’s extraordinary life, start here.

Marilyn Laszlo was a single woman who lived in the village of Hauna in Papua, New Guinea for over two decades. There were, to be sure, storms: Laszlo endured typhoid fever, malaria, and trichinosis. She ate termites as a gift from a nearby clan leader, and confronted tribal medicine men with the words of Jesus. Laszlo died in September. For more on her life in her own words, click here. For more on Laszlo’s legacy as a translator, click here for Kate Shellnutt’s tribute at Christianity Today.