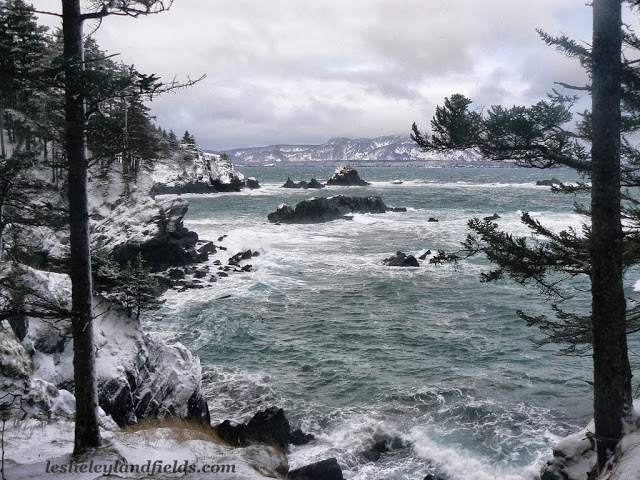 What would you give up to finally have running water in your house? Would you give up your spring break? Would you fly into a winter storm and ride an open boat on the ocean in 8 degrees holding your pregnant belly and hugging your three small children, cinching them close to keep from freezing? Yes, you would. Twenty-two years ago, I did as well.

The terminal, a long grey hall with pinball machines at the far end, was almost empty when we arrived. There were six of us, constituting a full flight for the Piper Cherokee we were chartering. The pilot watched as we stumbled into the hall with boxes and bulging black garbage bags for luggage. Of the six, three were children, the youngest just turned two, the oldest six. Myself, my husband Duncan and our longtime friend Ron finished the group.

The pilot looked at us questioningly. “You’re going out to Larsen Bay this morning?” he asked, puzzled.

“Yeah, we’re going to the fish site for the week,” Duncan answered.

“The weather’s good now, but have you heard the forecast?”

“How about Southeast 80 to 100 mph?” the pilot said with a subtle lift of his eyebrows. For a bush pilot, it was the equivalent of wild gesticulations.

This was news. I raised my eyebrows too.

“Why are you going out there this time of year?” he asked, looking at the children.

“For spring break,” I replied as blithely as possible, trying to sound like a happy vacationer.

It had not been my idea. Our island, on the west side of Kodiak Island, seventy miles from town, was remote, uninhabited, accessible only by water or plane, and was the site of four month marathons named more euphemistically the commercial salmon season. To spend spring break at fish camp sounded to me like coal miners picnicking down in the shafts. One friend was going to Greece for spring break. Other years we had gone to Hawaii, to Florida, to Mexico.

I was hesitant for other reasons, though. I could list four right off the top, and did, as the subject came up between December and March. They had names and also very young ages: Naphtali, Noah, Isaac, and the last we were still waiting on—three months to go. It wasn’t the ideal pregnant vacation. I didn’t really want to go. But gradually, I began to see the sense of it. We could get projects done we never had time for during the fishing season. My main hope was that Duncan would work on getting running water in the kitchen. That alone sold me the trip.

But now, 80 to 100 mile per hour winds? Kodiak sees blows like that at least once a year, but we don’t usually plan a vacation around them. Still, the weather was clear and calm as we stood there. It was cold, about 8 degrees, but the winds either were still traveling, or they had veered off elsewhere.

Duncan and I looked at each other, each silently calculating. The flight was only 35 minutes. We would be there within the hour. Once there, in the village, we had to find and then launch our skiff, then make the final leg—a 25 minute bounce in a small open boat out to the island. If all went well, we could be there in three hours.

“What do you think?” Duncan broke the silence, addressing the pilot. “We can beat it if we leave this morning, don’t you think? It won’t hit until later today.”

“Yeah, if we go right now we’ll probably beat it,” he agreed.

By the time we landed in Larsen Bay, the wind had begun, a biting, insistent breeze that promised more. An hour and a half later, the skiff had been found and launched and we were on our way. The breeze was now a genuine “blow,” registering a solid thirty mph. At eight degrees, with our forward motion plus a thirty knot wind in our faces, I didn’t need a wind chill chart to know it was cold. We all wore almost our entire closet of winter clothing, still the wind sent the four of us under a tarp, huddled together, backs walled against the gale. Duncan ran the skiff, standing upright in the stern to see over the high bow.

It took us 45 minutes to get there. We stumbled out onto shore, barely able to walk with our cold-stiffened legs. We were safe now on the island, but we were not warm. The house was 5 degrees inside. With every heat source flaming—the wood stove, all burners of the propane gas stove, the propane heater, the oil stove-—it took twelve hours to warm the front room to fifty degrees. Though we had built the house ourselves and had insulated it heavily, the wind hissed through the window moldings, wailed through the doorjambs, devouring our heat as fast as we could make it.

We didn’t sleep much that night, the kids piled up on one bed, the adults on couches in the one warm room. The stovepipe to the woodstove, rising twelve feet above us, cranked and shimmied with every blast of wind, threatening rupture and fire any moment it felt. The nearest person was eight miles away by water. Not that it mattered. Were we only half a mile from a neighbor, no one could move. All the world was paralyzed, pinned to the ground.

By morning, we guessed the wind to be near the 100 mark, the wind chill about seventy below. The vista out our front windows was unrecognizable. The distinctive colors of browns, whites, blues and greys had blurred into a single color: the color of wind, a streaked white erasing all boundaries between elements: water, sky, clouds, mountains, air, house—all dissolved into howl and smoke, moan and scream.

For three days it blew; for the rest it stayed cold. We did our best to stay warm. I was sick on the couch for half of those days, hands on my belly.

When I said yes to my husband seventeen years before, when I said yes to Jesus before that, I did not entirely know what I was saying yes to. Does anyone? I do know that those yeses have meant daily relinquishments and deaths, so much giving up. Jesus never told us different. He said it straight from the first: “If anyone would come after, let him deny himself, take up his cross and follow me.” But he never ended there. Whatever is given up for His sake—home, family, fields, running water—will be given back 100 times more, he promised. He did not lie. Even then, at the end of our hurricane week, before we climbed back into the frigid skiff to cross the winter waters and skies again, the five of us stood together in the kitchen in front of the yellow sink. The baby within me kicked at my ribs and squirmed. The older kids laughed. Together we looked admiringly at the new plastic pipes under the sink, staring at the bright faucet. We knew someday, like a river from a rock, clean cold water would spool from its spout and into our cups, spilling over and over.

“This book is a rare gift. It pulses with story and theology, with lived suffering and quiet joy, with vast mysteries and a strong Savior. The question is not whether you can put it down—because that will be hard—but whether you have the good sense first to pick it up and read.”
~Mark Galli, editor-in-chief, Christianity Today

3 thoughts on “Crossing the Skies and Seas”