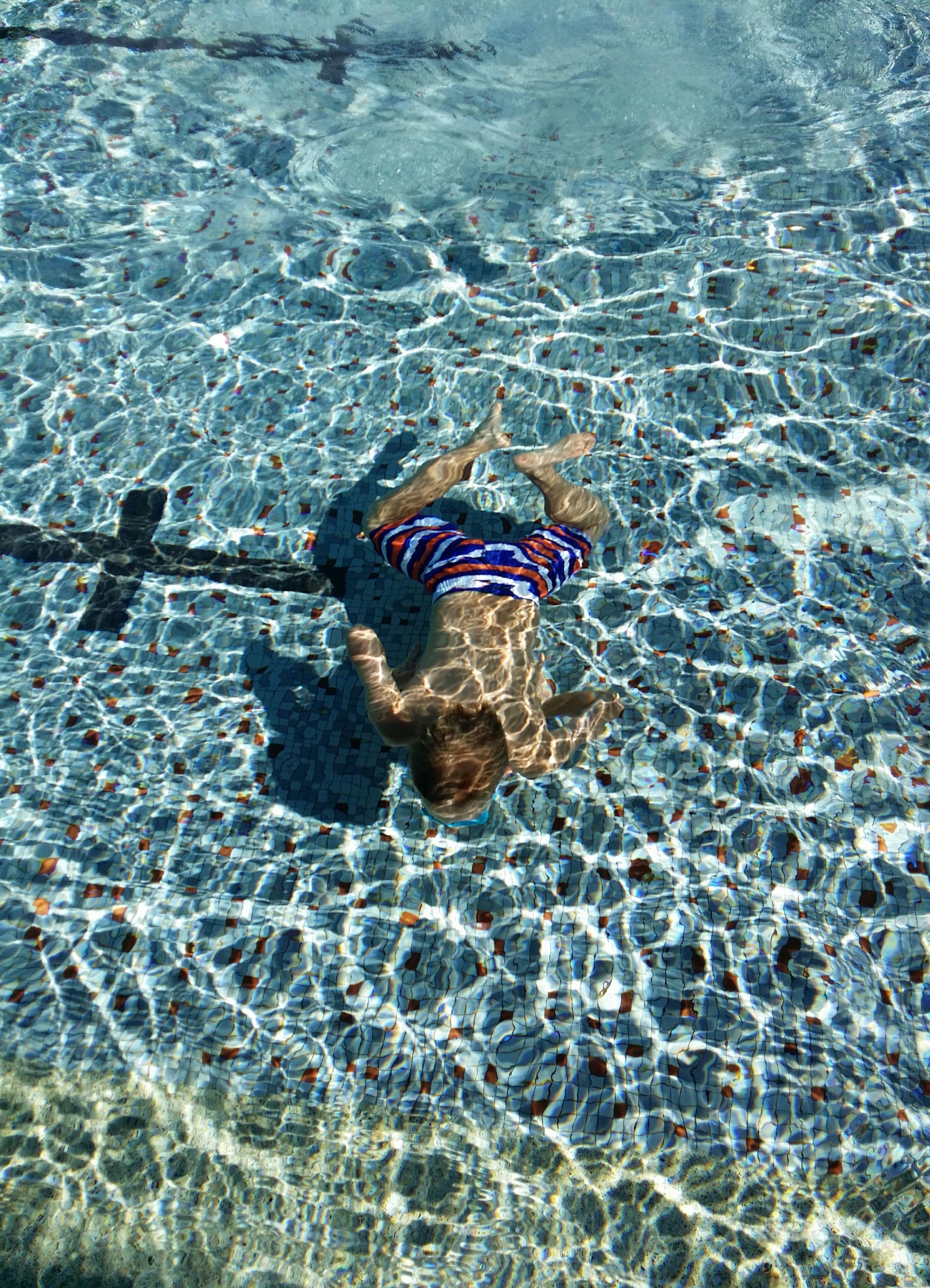 God talks to me at the pool. During seasons when I think He’s stopped trying to speak to me, it is in the middle of splashing water and the scent of chlorine while the sun beats down on my skin hot, warming me from the inside out that I catch my breath, wondering if that could be the Voice I am waiting for. I don’t swim, or rather I don’t know how. The memories from a misguided informal lesson 35 years ago where the space between me slipping underneath and the cold of the side of the pool floor with a lifeguard hovering over me, is stronger than my desire to overcome my fears.  But despite my personal limitations, our summers are spent at the pool with Kelly Clarkson and Aerosmith singing in the background as I watch them splash and play and go down the slide for the 14thtime, stopping only for the mandated fifteen-minute safety break as they reapply their sunscreen and eat the two dollar hotdog from the snack shack. Each year they are more daring, far more brave than I expect, as they accelerate through their swimming lessons. The water is deeper and the play is longer and my momma heart is full.

It was my youngest this time, who stood on the diving board with so much hesitation. It’s my third time doing this and somehow it is as terrifying today as it was when my oldest was up on the platform two years ago. I should be used to it, but she is younger than they were when it was there turn so it all feels…. precarious? She moved up a level in swimming and decided she wanted to add diving class to her morning routine. I am proud of her, but the thought of her willingly jumping into twelve feet of water where I couldn’t jump in to help her even if I tried is impossibly difficult for my heart to hold. I watched the older two do it last year, but this time was different.

She ran to the beginning of the line, using her small size to worm her way to the front, much to the chagrin of the eleven other students. They were lined up to do their first jump off the diving board. She had been waiting for a year for this moment and it finally arrived. With it, so did fear. She stood there, unable to move. One of the teachers, sensitive to the emotions in her, the youngest in the class, jumped in the water underneath the board to help cajole her. I could see the determination in my little one’s face, yet no matter how she tried to will herself, her feet were firmly planted on the diving board, not allowing her to move. The children behind her were beginning to become restless, muttering first under their breath, and soon much more loudly. My oldest tried to get them to stop, all the while my youngest stood on the board, not willing to give up but unable to jump.

My eyes started to well with tears and it felt like I was the one up on the board with the voices of naysayers behind me and deep waters in front of me. As I sat there watching her, I could hear my own doubts taunt me when another voice grew louder. It was her teacher.

“I know you can do this. I wouldn’t let you get up there if you couldn’t. I know it feels scary right now but once you jump it will be the best feeling of your life. I am right here in the water to catch you if you need it. I need you to trust yourself and jump. I promise I won’t leave you. You’ve got this. You always have.”

My youngest looked right at her, took a step back, and with a big smile on her face, stepped out and up and jumped into the water. I held my breath as I watched as her body go into the water and saw the biggest smile on her face as she bobbed back up. She swam to the side and as she came out of the water began shouting, “I did it!” She ran over to me to give me a very cold and wet hug as she found her way back in line for another turn. She hasn’t stopped diving since then.

God spoke to me at the pool, while my baby stood on the diving board, reminding me that the thing in front of me that scares me is not designed for me to do alone. I don’t have to be scared to make that jump.

You don’t have to be either.