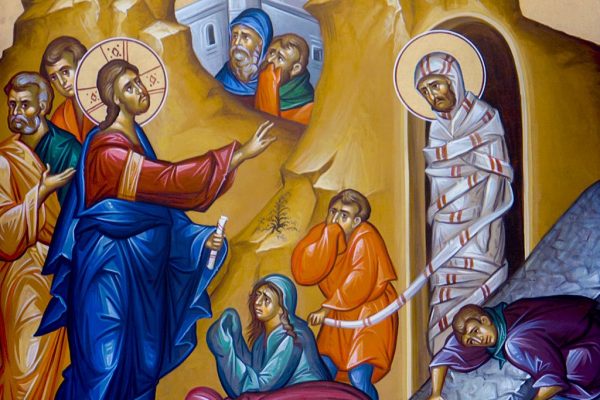 Listen to the audio recording of Tammy’s words here, or read the transcript below:

Based on the story of Lazarus in John chapter 11.

John begins the story as the distant narrator, telling us that a certain man, Lazarus of Bethany, was ill. We, the readers, are then introduced to this man’s sister Mary, who is known for the extravagant display of anointing the feet of Jesus with oil.

Lazarus has another sister, and the action in this story starts with the sisters sending for Jesus, informing him that the one he loves is ill. To keep the energy flowing, as all good stories must, we are now expecting a deadline, a countdown, a race against time, maybe some sand storms, speeding camels, and shifty nomads to evade.

Jesus brings the narrative to a halt by telling his followers plainly, “This illness does not lead to death.” We breathe a little easier, and the disciples are relieved because they did not have to go back to Judea where certain death awaited them.

Jesus stays two more days and then decides they are going to Judea after all. Apparently, in the prequel to John 11, Jesus was nearly stoned by an angry mob for claiming to be one with God. The disciples are looking at each other like he is delirious with heatstroke. Jesus goes on to say a bunch of stuff about shadows and light and stumbling and sleeping, which I doubt any of the disciples actually heard since they were busy planning their own funerals in their heads.

There’s a location change, a scene change, and probably a costume change since they had been sweating a lot and in close proximity to camels and donkeys and shifty nomads.

Jesus and his entourage show up in Bethany and the greeting is not a pleasant one. Martha meets him before he enters the town to tell him none of this would have happened if he had just come when they asked him to. But, she also tells him, “even now I know that whatever you ask from God, God will give you.” Jesus answers, “I am the Resurrection and the Life. Whoever believes in me though he dies, yet shall he live. Do you believe this?”

Mary enters stage left, and she brings with her a crowd of Jews who had been grieving with them. Mary falls at Jesus’ feet, and she makes the same statement Martha did, “If you had been here, my brother wouldn’t have died.” There was weeping and disappointment and despair.

They arrive at the tomb together and he tells them to remove the stone. Jesus prays loud enough for everyone to hear him, letting the people know he is doing it for their benefit, not his own, or even Lazarus’. Jesus then calls Lazarus out and the dead man staggers from his tomb.

It is tempting for us to consider Lazarus the protagonist of this story, after all, it is his death that brought them all together and gave him his own chapter in the Bible. But he is not.

This story, this feature, this epic saga is not about Mary and Martha and Lazarus, Thomas the Twin, and tag-along Jews. The lead character will always be God. The rest of them, and the rest of us, merely have supporting roles. We are walk-ons, extras, doing hair and lighting, setting the stage. This does not diminish our involvement or importance in the slightest. Without these elements, these roles, the story could not be told in its magnificent fullness.

It is always about Jesus, in his sovereignty, casting, directing, and producing this larger-than-life drama that we are bit players in.

The lead character will always be God.

This story of Lazarus is just like fifty others in the Bible with their tragedy and flawed humanity, tales of love won and love lost, reputations made and reputations ruined, kingdoms built and kingdoms conquered, walls built up and walls brought down.

These stories parallel every aspect of our own lives, mirrors for us to peer into for a glimpse of ourselves. Jesus appears and says, “It’s not about you. It’s about Christ in you, the hope of glory.” With every story, we are asked, like Martha was, Do you believe this?

The Israelites spent forty years in the desert crying out for rescue. Joseph endured 13 years as a slave, a victim of devastating betrayal. Daniel in captivity fasted and mourned for 3 weeks, grieving over the sin of his people. Lazarus died and lay in his tomb for four days.

The rescue was already in play, for all of them, in every situation.

None of these circumstances were accidents. There was no arbitrary randomness. Although they occurred at fixed points in time and space, these events were in motion for ages before they ever came to pass. The rescue was already in play, for all of them, in every situation. Do you believe this?

We all have those times in our lives when our faith is crushed, and we tell God, “If you had been there, none of this would have happened.” For myself, in the span of seven years, I’d lost a pregnancy, a mother, a brother, an uncle, a grandmother, an aunt, a cousin, a church community, friends I trusted, health insurance, and a job, which culminated in an avalanche of trauma that threatened to bury me alive.

After C. S. Lewis’s wife, Joy, died of cancer, he wrote in A Grief Observed, “Not that I am in much danger of ceasing to believe in God. The real danger is of coming to believe such dreadful things about him.”

For me, the sovereignty of God became something to be feared. Since God allowed these terrible things to happen to me, what else would he allow? During this time the one thing I found comfort in was a constant reminder of God’s attributes as well as his immutability.

God is good, can never be anything but good, and will only ever be a good God, regardless of the circumstances.

Do you believe that he can redeem, rescue, and restore even your situation?

Do you believe that he can find you in the desert, deliver you from slavery, restore your nation, raise you from the dead?

Resurrection requires a tomb. There can be no rescue without peril. Restoration without loss would hold no meaning. Redemption requires captivity. Your rescue is already in play and has been since before time began.

God can turn the hearts of kings, cause the sun to stand still, seas to part, water to come out of rocks, pillars of fire to lead people in the desert. Can he not part your seas? Can he not redeem what you have lost? Will he not rescue you from your lions, your Pharaohs, your Philistines, your Potiphar’s wife, your Pharisees, your Pontius Pilates? From faithless friends and watchful enemies?

Does he not heal twisted limbs, bring sight to the blind, lift up little girls from their deathbeds? Does he not restore what the locusts have eaten, empty tombs, and resurrect the dead?

Has he not been planning your rescue from before you were born?

Jesus weeps for you like he wept for Lazarus. His heart is broken for your broken heart. He sees you, in your confusion, your lostness, your anger, your despair.

Does he not restore what the locusts have eaten?

Whatever tomb you are in right now, he holds it in his own hands and lets that darkness pierce his own heart so that light will shine through his own wounds, and bring you back to life.

He is the provider of loaves and fishes, teller of parables and maker of miracles, giver of overflowing nets, creator of feet that walk on water, and hearts with doors that can be knocked on.

He is your God, your rescuer, your redeemer, your restorer, the One who gives you new names, new lives, new hope.

In Isaiah 58 we are given a promise:

The Lord will guide you always;

he will satisfy your needs in a sun-scorched land

and will strengthen your frame.

Your people will rebuild the ancient ruins

and will raise up the age-old foundations;

you will be called Repairer of Broken Walls,

Restorer of Streets with Dwellings.

Even now I know that whatever you ask from God, God will give you.

Do you believe this?

One thought on “Whatever Tomb You’re In”