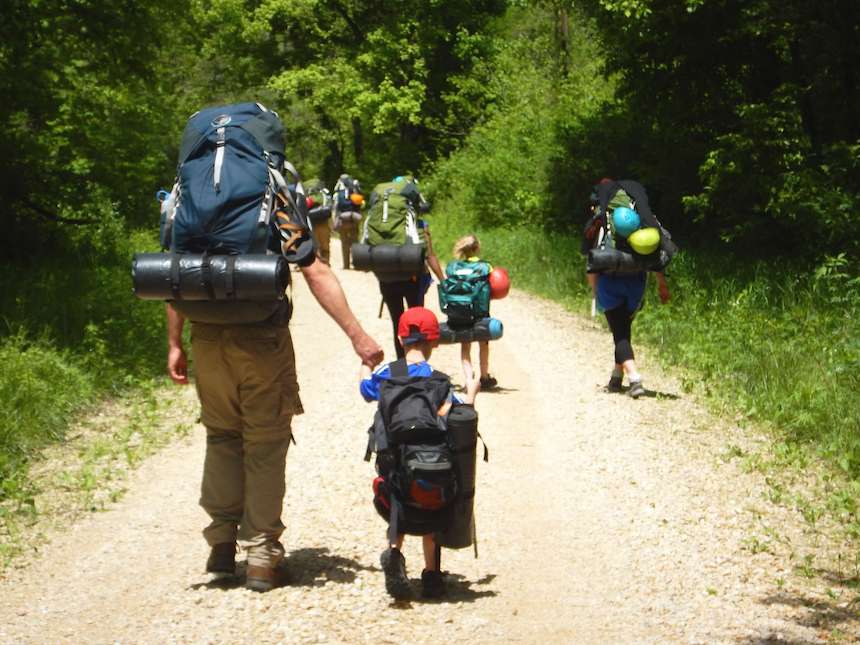 The sky had been stormy for hours already, so the transition to night was difficult to discern. Disoriented, soaked through, and shivering—we waited for direction.

We had started out the day staring at an “x” on a map, a destination we needed to reach. As the day grew long, our surroundings didn’t look right and our little team began to grumble. The leaders of our expedition, my husband and another member of the group we were traveling with, finally confessed they didn’t think the path we had been following all day would take us to our destination.

Once they realized we were on the wrong trajectory they set off to right our course, but this correction took us down a hill that was already steep before the day’s rains had turned the decline into a muddy slide.

I squeezed my children’s hands, trying to pass some confidence into their shaking arms.

What would happen next lay in their hands. I could see the weight of the decision they must make pressing down on them. Would we continue through the brush trying to find the path, darkness barking at us like a hungry dog? Or would we go back the way we came, returning to the marked (but wrong) trail to find a place to camp? How much longer could we go on in this cold, wet terrain—weary as we were? Whatever they decided affected us all.

I squeezed my children’s hands, trying to pass some confidence into their shaking arms. My five-year-old son’s twenty-pound pack made him look like a turtle slumping under a too-heavy shell. My daughter, two years older than him and trying to seem much braver, winced. I knew her ankles hurt but she wouldn’t say anything about it again. She could see the worry in her dad’s eyes.

We’d been hiking for 48 hours, the last few in sloshy boots and packs burdened with rainwater. In those moments when we stood still waiting for a way forward, hope began to wane. Even if we found a suitable place to camp, could we start a fire in this rain? No longer warmed by the constant movement, we shivered in fear. Hunger gnawed at our confidence that everything would be okay.

“Each of us has the right and the responsibility to assess the roads which lie ahead, and those over which we have traveled, and if the future road looms ominous or unpromising, and the roads back uninviting, then we need to gather our resolve and, carrying only the necessary baggage, step off that road into another direction.”

“If the new choice is also unpalatable, without embarrassment,” she added, “we must be ready to change that as well.”

There are moments when there doesn’t seem to be a path that leads us back to good. We’re past the point of no return, and there is no map laid out for what happens next. Despair weighs us down like the straps of a pack digging into our shoulders.

I am reminded of another scared group huddled amongst the trees, waiting for directions for their next steps. Confused by the path their leader said he would lead them down and exhausted, they went aside to pray. In the garden whose name means “pressed,” he was crushed by the weight of what was to come like the olive crushed to extract the precious oil from its skin.

Jesus knelt in prayer and wrestled with the uphill climb he knew was ahead but committed to pressing on because of the faith he had in what lay on the other side. He knew the future would be hard for those men he loved sleeping under the olive trees: the weight they would carry, the despair that would try to defeat them.

But he knew hope isn’t stagnant.

Night was coming and those men couldn’t see beyond it.

Yet they followed the One who led them on.

Our expedition leaders humbly admitted we needed to backtrack that night and we returned to the height of the ridge. We regrouped and redistributed the weight. Several people took some of my son’s supplies to lighten the load he carried up the hill. We trusted their direction and stumbled back up the incline, using saplings as leverage and makeshift walking sticks to pull ourselves upward.

We found a rocky riverside by the weak light of our headlamps and struggled to build a fire and make camp in the rain. Straddling the packs of others, I felt the weight of my children’s limp limbs. They were too exhausted to wait for food. I wept as I peeled the heavy clothes off their sleeping bodies, but finally, we were all able to rest.

In the light of the morning we discovered we’d stumbled upon the very destination we’d been looking for all along. We’d been on a ridge that ran parallel to the one we were supposed to have taken. Because of our leaders’ willingness to listen to wisdom and chart a different course, we made it to the right goal after all.

“I’m not saying that I have this all together, that I have it made,” said the Apostle Paul in Philippians 3 (verses 12-14, The Message). “But I am well on my way, reaching out for Christ, who has so wondrously reached out for me. Friends, don’t get me wrong: By no means do I count myself an expert in all of this, but I’ve got my eye on the goal, where God is beckoning us onward—to Jesus. I’m off and running, and I’m not turning back.”

We may not be able to see the goal shrouded as it is from us in this present darkness. From where we are right now—in our own suffering, as a fractured country, as a broken and battered Body of Christ—there may not appear to be a way forward.

The way may not be clear, and it certainly won’t be without troubles. It will be full of aches, frustration, hard work, mistakes, confession, and retracing our steps.

But we know hope isn’t stagnant.

Night is coming and we can’t see beyond it.

Yet Jesus leads us on and promises that in this wilderness,

Fog rolled in last summer, hovering outside my window above END_OF_DOCUMENT_TOKEN_TO_BE_REPLACED

Whatever Tomb You’re In