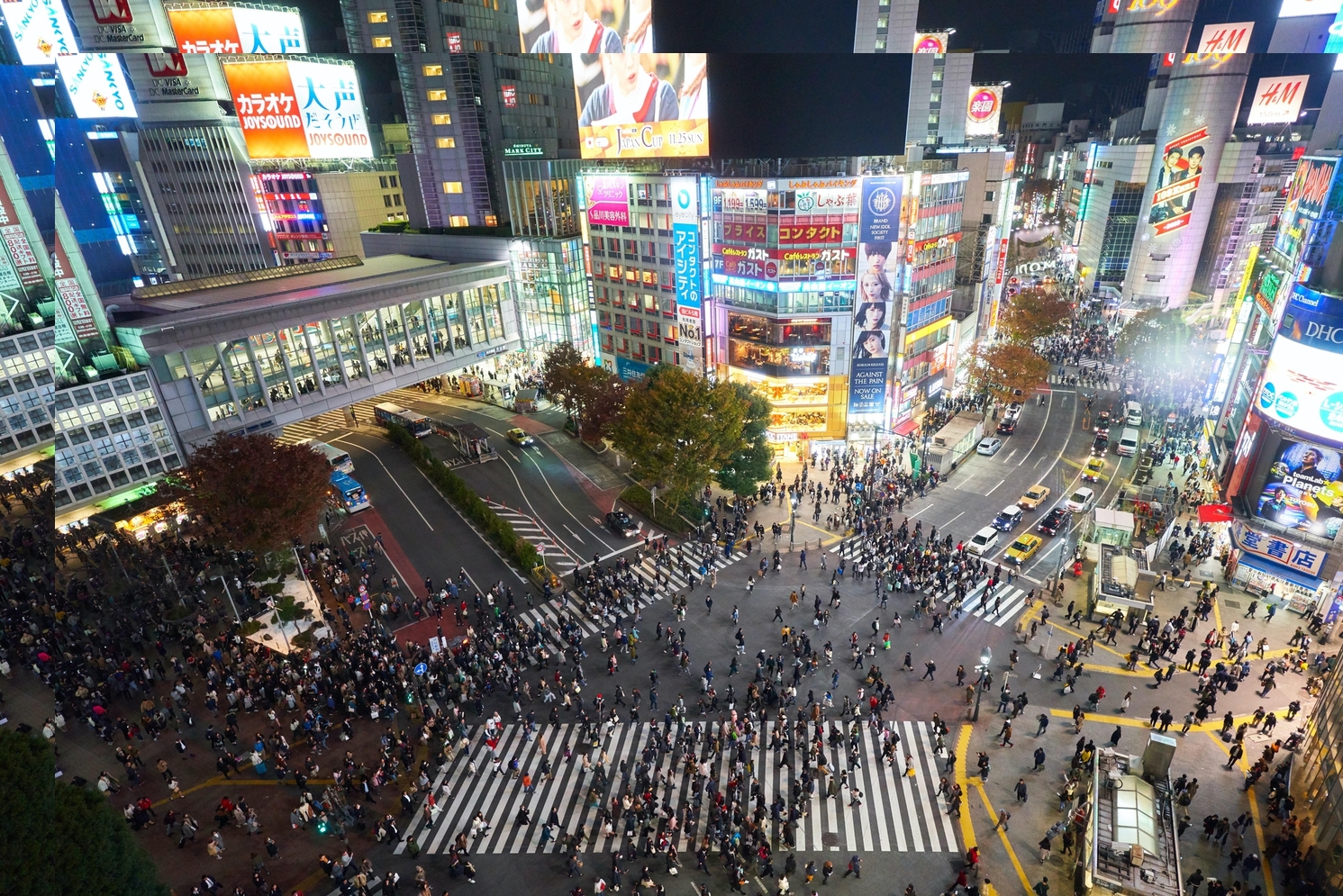 Shibuya Crossing simmers like a pot of Tokyo fusion, humming with aromas both foreign and familiar. In seconds its blends of foot and vehicle traffic rise to a rolling boil, and the lid begins to rattle. Ten lanes of traffic grind to a halt just in time for walk signs to open the pedestrian floodgates. The boil becomes a scramble as an estimated 2,500 people pour into the intersection.1

It’s a mass exodus to everywhere.

From my second-story Starbucks perch, I cling to a matcha latte and watch in silent awe as humanity blurs into chaos and congruity. It is simultaneously a thing of bedlam and beauty. By some miraculous twist of fate, every single soul survives what journalist Joshua Mellin christened a “mesmerizing, yet claustrophobic, waltz” to the other side.2

A man at the table adjacent to me glances up from his book to instead read TOURIST on my forehead. What begins as an exchange of pleasantries ends with a monologue of his globe-trotting adventures and stellar business career. I nod politely between sips, but my eyes and mind stray to the drama of Shibuya’s great migrations below.

My husband smirks as he frees me from captivity with newly-vacated front row seats. We hop on bar stools planted by the window and study the mesmerizing masses below.

We trace a bride and groom as they daringly cross and recross the intersection. Their photographer trails them like a puppy in the crowd. We chuckle at his attempts to capture true love in a swarm of strangers.

Some stoic faces in the crowd disclose local commuter status. They shuffle across with disinterested purpose on their way from A to B. We pick out the obvious tourists (takes one to know one) with phones clamped on selfie sticks and backpacks weighed down with wattle bottles. They halt mid-migration to pose for future status updates.

There’s a final assortment of cross-walkers peppered among these others. They conjure my people-watching curiosity more than the rest: Some are costume-clad, others look as if they’re expecting a red carpet escort across the intersection. They’re the “all dressed up but with no place to go” crowd—because, apparently, they’ve arrived.

“I finally get it! Shibuya Crossing,” I epiphanize to my husband, “is famous BECAUSE it’s famous!”

In a previous work life, I sat next to a colleague who grew up in the UK. Our daily banter included his frequent and dry observations of American pop culture and its unapologetic pride.

He’d mock attention mongers flapping his arms, hummingbird-style, while crying “Look at me!” in a helium-sucking falsetto.

I delighted in our smug finger-pointing sessions. Often, I’d play along.

Though I can’t recall our exact late-nineties diatribes, they went something like,

By our standards, these parodies were hilarious. I thought so too until I recently realized that our roast list today—in the age of social media platforms—would be infinitely longer.

Also, it would include me.

I don’t know exactly when or how I conflated the truth of Jesus’s words in Matthew 16 with my own. I just know that I did, and that it took minimal effort to pluck “follow Me” out of context and apply it to . . . me.

I skipped across social media’s bustling intersections and echo chambers, megaphone in hand, day after day screaming, “Look at me!”

Simmering beneath my digital footprint was a cauldron of insecurity. The evidence was incriminating:

Carefully crafted posts and pictures really read “Look at me trying to look like I’m not trying!”

Comments and replies translated to “Look at me being all witty, compassionate, and AWESOME!”

When I occasionally dipped my toe into (calculated) dissent, my true motives cried, “Look at me! I’m so wise and tastefully edgy!”

I cast like after like as clickbait in search of affirmation reciprocation. I gloried in the dopamine rush of spotting fire engine red notifications in the upper right-hand corner. Each one triggered (sing it Taylor Swift) a “dwindling, mercurial high.”3 Self-esteem was always just a tag away—until one day it wasn’t and I stood penniless, staring into a bottomless wishing well on a dead-end cobblestone street to nowhere. (Not a Taylor Swift song, but maybe if she releases a THIRD alternative-folk record within a year . . .)

Shibuya Crossing is best in small doses, so my husband and I flee our Starbucks roost in search of city solace elsewhere. We set out for a bustling department store to admire a million different models of Japanese super toilets. (I kid you not, and I kid you not.) Exiting, we spot a pedestaled Akita dog peering through a steady stream of passersby. He never flinches, not even for the many who stop for another selfie (this time) with him or for the gifts they lay at his feet.

The loyal Hachikō met his owner here regularly on his afternoon commute home to Shibuya Station. One day in 1925 the professor never stepped off the train, having died suddenly at work. Undeterred, Hachikō continued his steadfast trek to the station for the final 10 years of his life, faithfully awaiting his master’s arrival. Now immortalized in bronze, his eyes remain forever fixed on the horizon for the one who holds his heart.

Shibuya Crossing, it turns out, really is more familiar than foreign to me. I’m a stranger in these streets, but not really. I’ve camped here for years: all dressed up with no place to go—frantically flapping my wings and screaming,

“Then Jesus said to his disciples, ‘Whoever wants to be my disciple must deny themselves and take up their cross and follow me. For whoever wants to save their life will lose it, but whoever loses their life for me will find it.'”

Funny, the unattractive words Jesus uses here: Denial and cross-carrying are not the stuff of viral posts or tantalizing threads. They promise nothing in the way of fame or esteem, dopamine hits or “mercurial highs.”3

They promise only loss

I think about Shibuya Crossing, famous because it’s famous, and the dog quietly combing the crowds for a glimpse of his master.

But not for too long.

There are toilets to peruse, and later tonight we’ll wear Disney-themed costumes and race Mario Karts back here for all to see.