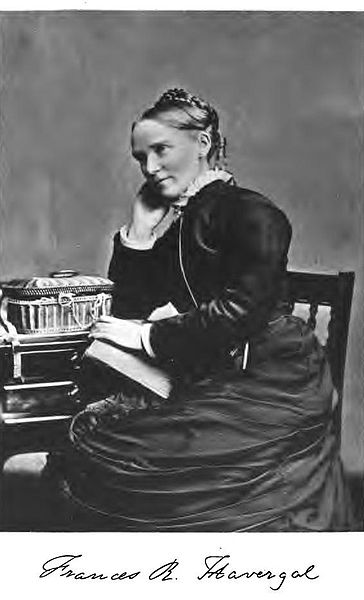 “A great deal of living must go to a very little writing.” – Frances Ridley Havergal

You probably don’t recognise her name. But if she had been born today, you would.

She was the equivalent of a famous Christian singer-songwriter. You would have gone to one of her gigs, sung her songs, heard her testimony. You would own at least one of her seven albums.

Perhaps you would have gone to her book-signing, or heard her speak at a conference. She published 30 books: devotionals, hymnbooks and shorter evangelistic pamphlets.

She wrote letters about her travels around Europe, which were read by a new generation of armchair tourists. Today this would be a mega-blog. She would have been Jamie The Very Worst Missionary, or Jen Hatmaker—known for her straight-talking preaching and witty storytelling.

If she had been born in our time, you would know her name.

But she was born at a different time: 1836, in England, daughter of a minister.

Her life was privileged, but lined with tragedy. When she was eleven, her mother died. The family moved out of their country vicarage to a gloomy house in the city, and she was very lonely.

Possibly it was this early suffering that formed her greatest strengths: a determination to live single-mindedly for God, and to see joy in the everyday.

She did Big Things—missions, publishing books, traveling, but it all sprang from the small things, a daily determination to honour God.

She was advised to go on trips abroad for the sake of her health. But while others were enjoying the luxury food in the hotels of Europe, she got to know local people in the villages, setting up impromptu evangelistic services, and praying for the sick.

She had a gift of insight. One day she encountered some appalling customer service at her hostel. My response to rude staff is to flame them on Twitter; hers was to see into their soul:

“I went close to her, looked up into her wicked looking eyes, and said (as gently as possible) ‘You are not happy, I know you are not.’ She darted the oddest look at me; a sort of startled, half frightened look, as if she thought I was a witch! I saw I had touched the right string and followed it up…and then, finding she was completely tamed, spoke to her quite plainly and solemnly about Jesus. She listened…took A Saviour for you… thanking me over and over again…” (Havergal, cited in In Trouble and In Joy p.251)

Most of her time was spent in small conversations like these: meeting strangers, loving them, pointing them to Jesus.

She lived with purpose, but also with great fun. Once she and her friends decided to completely undress, and undertake an icy hike up the mountains at 4am in just their underwear “and not even a necktie.”

She died at the relatively young age of 42. Weakened by a former bout of typhoid, she contracted peritonitis, and died in great pain. Ten minutes before she died, she gathered the energy to sing one last hymn: “Jesus, I will trust thee.”

At the age of three she could read; as an adult she knew six languages including Biblical Greek and Hebrew; she taught herself advanced harmony, impressing even established composers.

If she had been a man, with her gifts and opportunities, she might have been a famous international evangelist, or started a church movement, another Charles Wesley or George Whitefield. You would know her name.

Instead, as a woman in 19th century, within the limitations of respectability at the time, she did her utmost to live her life as meaningfully as possible in the everyday.

If you are tempted to think your words don’t matter or your life doesn’t matter, remember Frances Ridley Havergal. Her songs were beautiful because they were a distillation of her life and heart, her undiluted desire to live for Jesus.

She did not campaign parliament, she didn’t start a school or a church, she was not canonised. She simply told others her story, and wrote her heart.

Two hundred years later we are still singing her words.

Today I join my prayer with hers:

“Take my life, and let it be

Take my moments and my days,

Let them flow in ceaseless praise.”

(With thanks to Sharon James’ book: In Trouble and in Joy)

Fog rolled in last summer, hovering outside my window above END_OF_DOCUMENT_TOKEN_TO_BE_REPLACED

28 thoughts on “The Famous Woman You’ve Never Heard Of”