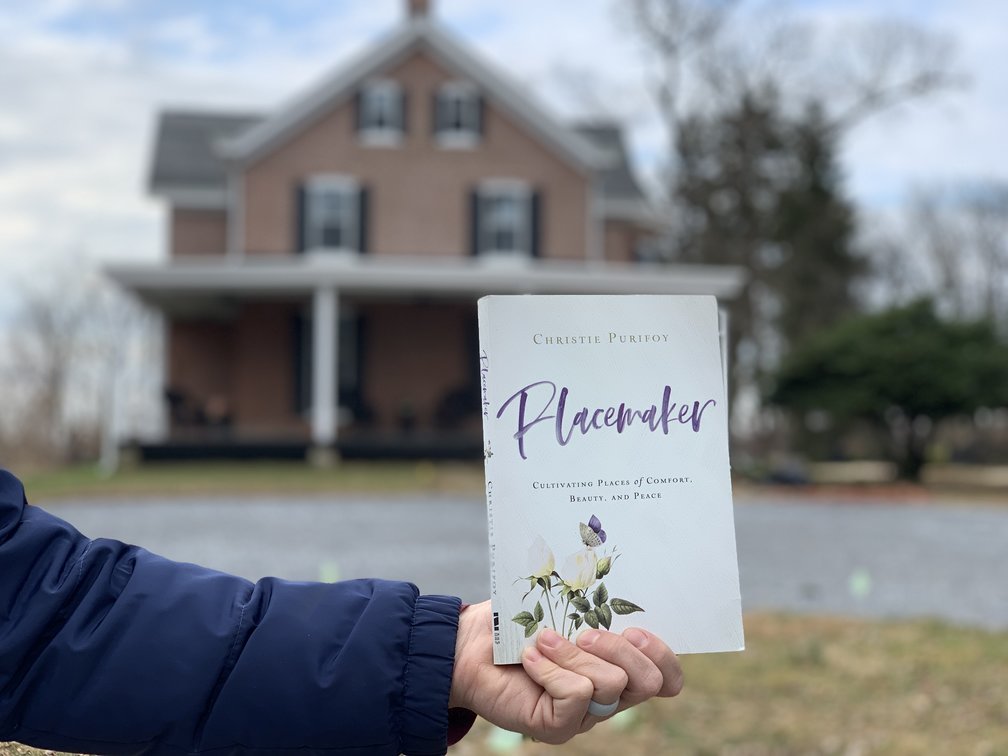 The morning light filters in through wavy glass windows in a little nook off a farmhouse dining room. I sit across from Christie Purifoy, watching a squirrel foraging outside in the winter-bitten grass, and it strikes me that the drab brown of mid-March is a perfect backdrop for our conversation about placemaking–a visual reminder that cultivating places of beauty and peace takes vision, hard work, and dedication.

And often, the ones who do the hard work, are strikingly absent. Especially when they are women.

I recently read of Wu Zetian, the only female emperor China ever knew, whose rule (amiable despite her rather harsh ascent) unified the empire and brought about needed social change and yet whose contributions were hidden for years by the bias of historians. Or Edmonia Lewis, the first African American/Native American sculptor to be internationally recognized but whose work, primarily featuring ethnic and humanitarian subjects, has been largely lost or destroyed. Or what about Zelda Fitzgerald, wife of The Great Gatsby’s F. Scott Fitzgerald, the inspiration for most of his heroines? Her name is not known in most circles, despite being an accomplished writer herself.

The Lenni Lenape tribe, native to Christie’s part of Pennsylvania, claimed an agricultural way of life. Women were the primary farmers, but because the British—whose experience dictated the preeminence of male agriculturists—were writing the story, we don’t know the agricultural contributions of the Lenape women. Life, it seems, is full of beauty and the echoes of absent ones who shared the burden of its creation.

So many women remain in the dark recesses of careless oblivion. The Biblical list of absent women is long . . . and too many who are known remain nameless. Noah’s nameless wife walks into the ark, and we are left to imagine her daily life upon that unexpected lifeboat. Jairus’ daughter, Pharaoh’s daughter, Paul’s sister. Even the women who were named in the Bible often aren’t recognized for the parts they played in the narrative. Sarah is comparatively absent in the Genesis stories, though in her long-quiet womb would grow the Isaac of blessing and promise. Hagar has even less to say. Eve, the mother of all the living, is completely absent once Seth is born into the world.

Did their hearts ache with a longing they did not know to name? Certainly, they did the work of placemakers, creating beauty and peace in less-than-peaceful lands.

Christie looks out the wavy glass window and talks about absent placemakers—the women who lived and worked in her old farmhouse and garden long before she did. “The unique thing about an old place,” she says, “is that it does connect you with past placemakers. It also makes it harder for me to think that I am so important to this place. It’s humbling in a proper way. I’m just one in a line. We can get swept away by these world-changing narratives [but] it doesn’t have to be on a grand scale to be important. It can just be about the day to day. I would hope [that my book] would be a tribute and an honor to those who are just doing the work.”

The day to day. Just doing the work. How many of us have kept a vase of fresh flowers on the corner of an office desk? Lit a candle as the sun sets, leaving us in dusky twilight? Tended pots on a balcony in the middle of a concrete wilderness? Made dinner for children we knew would come to the table only to turn up their noses?

Dallas Willard once said, in an interview with Luci Shaw, “Beauty is, above all, a manifestation of grace, of abundance and generosity.” What if, at the risk of not being recognized, we still made a choice to offer such day-to-day manifestations? What if we didn’t worry about being world-changers, but instead linked arms with the absent placemakers of history and planted seeds of beauty in whatever ways we can today?

In her choice to exchange a career in academia for a suburban farmhouse, Christie has, on the one hand, made much the same decision. I ask her how she feels about the possibility that with that choice she has become, by cultural standards, one of the absent ones. The squirrel now just outside the window has time to run up a tree and down again, before she answers.

“I had to start by letting go and not knowing what would be given,” Christie finally says. “It was not a letting go to become, but it was a letting go with just a glimmer and no path forward. It was risky. It was not driven by a desire to have power in another circle, it was driven by disappointment and a desire to be home more and make a place. For me. And then to share. My life is not the model, but maybe letting go is.”

Maybe letting go is. Christie and I talk about the magnolia in her front yard that blooms so dramatically each year, and the maples that are slowly dying along her long driveway. She tells me that planted trees are very different from forest trees, that arborists speak of planted trees as conversation starters. Future planters see the planted tree and respond to it by how and where they plant. This, too, is placemaking, placemaking as a conversation. Our offerings of beauty, those seeds of grace and generosity—they are responses to the offerings of beauty and grace and generosity of those who have offered before us. And they provide a place for those who follow, perhaps long after we are absent and forgotten, to plant their own seeds of beauty and peace.

I think about what my offering, my seed, will be today. But maybe that’s the wrong approach. Maybe I need to be looking for the conversation starters that already exist and make my offering as a response. This would be a choice to honor and enter into the quiet work of participation in this world that God through his people is working to restore. Luci Shaw writes, “Beauty is Love taking form in human lives and the works of their hands.” If placemaking is cultivating beautiful and peaceful places, then aren’t we called to cultivate places where love and grace are made as visible as the big white oak tree Christie writes of in her book?

Life is full of beauty and the absent ones who’ve created it. As we look back on women in history this month, there is much to celebrate. So many women have contributed so much to the lives we know today. We remember, too, the women we don’t see, the women who have cultivated life not on a grand scale but on a simple, day-to-day one.

We set the table. We plant the seed. We remember the absent ones.

Amy Knorr
Writer at One Step to Blue
Amy Knorr is an educator and freelance writer living in Pennsylvania Amish country. She has a passion for speaking, teaching, and seeing beauty in small things. She is married to a scientist who makes her laugh and has two girls who make her laugh harder.

This is for you, Love.