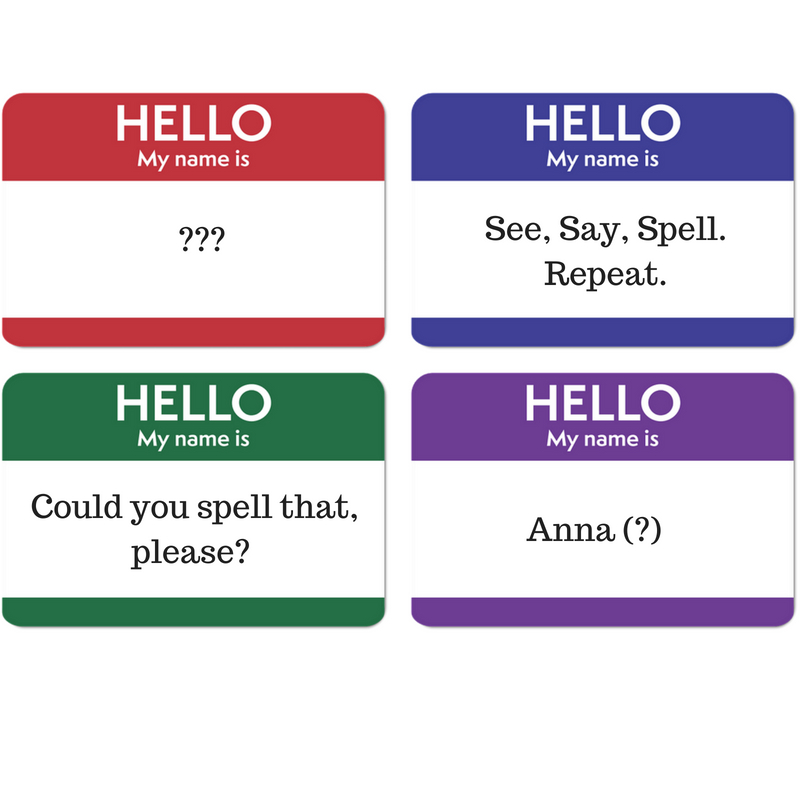 “Could you spell that?”

My name. You ask about my name. Countless times. Almost every week, in fact, you ask me to repeat or spell my name.

For years, I lamented the fact I did not have a simple American nickname to make this part of life easier, for you and me both.

When I was younger, I imagined having a simple, easy-to-pronounce, no-one-would-ever-stumble-over name. I’d imagine a teacher stating my very ordinary name during attendance on the first day of class and moving on right away to the next student. In later years, I’d replay golden moments of introductions where you’d shake my hand, say my very ordinary name, and then simply move into conversation. You wouldn’t request a repeat, ask how it’s spelled, or inquire about its meaning and origin.

I was raised in the U.S., but you aren’t sure of that by looking at me. Yet, I think like you. I dream like you. I speak and sound like you. If we’re speaking of a Northern and Western European image of a white America, though, I don’t look like you.

My name, however, doesn’t sound like yours. But, since we think and speak alike, I wondered if it would help to have a name that does sound like you.

I am aware that some folks with common names like Ann or Mary wish for something a bit unique from the hundreds of other Marys and Anns. They do not want to be entirely invisible in the melting pot of common names.

Yet I was fatigued with feeling like a conspicuous stone in the soup.

Sometimes, I can hear hidden, unspoken thoughts: “Yes, go ahead and change your name. You’re in my country now. You’re in America.”

After pondering that for years, I finally decided to adopt a common, typical “American” sounding nickname to use on an unofficial basis. I decided it would be a name with only 4-7 letters and limited to only one or two vowels. I dreamed about something simple, and well, I found it right there under my nose. I found the letters “anna” in the middle of my real name: Prasannata. I actually used the pen name of “Anna” on my blog in the early years, thinking it might close a virtual gap between us.

It’s not uncommon for ‘foreigners’ to adopt American nicknames. I’ve seen some funny jokes on the internet about substituting short, cute American nicknames for long Indian ones. I’ve laughed at those jokes myself. My ethnic name fits those stereotypes, and the idea made some sense to me.

It made sense, that is, until the day I overheard an Indian friend talking about one of her other Indian friends who had adopted an American name.

“Traitor,” she chuckled, referring to her friend’s decision to adopt the American name.

She was half-joking, but I heard the word ‘traitor’.

I felt, once again, in no-man’s land. In the middle of two cultures. I thought a nickname would make things easier, and help to bridge an ethnic gap; but also, I realized I, too, could be considered a traitor.

There is no name to define this of in-between place.

In the middle of two cultures, I was pulled in the tug-of-war between two identities, appearances, and expectations. Once again, I found myself reckoning with what others expected from me, my own desires, and what was truly realistic. If all of these circles of existence could be placed in a Venn diagram, was there any sort of happy middle space where all the different parts intersected? Does such a place exist, or are we relegated to our own circles, standing on our own borders? Can we find those places where we meet and speak and live and get along and listen?

The question and struggle remained: Should I change my name for you? Where do I stand?

I dwell in that place where my skin color doesn’t match my external or internal geography.

But even if I were to move elsewhere, where skin color more closely matches my own, I still wouldn’t fit in: they’d expect me to think and act like they do, even speak their language, none of which I can do. Yet, we’d match on the outside.

So here’s where I’ve landed, in the realm of language: I’ve adopted an abbreviation of my real name, but spelled phonetically for easier pronunciation and writing. I thought it might help us both, though I still repeat and spell my name on a regular basis.

Frankly, I dread repeating my name or having it spoken aloud when most other names around me are “American” and familiar. I still feel conspicuous.

But, I’ve realized it’s not all up to me.

I know what some of you may be thinking. Do names really matter that much? Isn’t it what’s in the heart that counts? Isn’t it one’s intentions? Yet we value other human beings when we refer to them by name, when we make an effort to spell and pronounce a name as close to the right way as possible. When others say my name, and spell it right, it makes an impression. It says to me: “I see you. I see who you are. Your name is different, but you don’t have to change your name for me. Just be who you are. I’ll meet you there in that space.”

That, my friend, is a gift. Will you meet me there? I’m already here, waiting to meet you.

Fog rolled in last summer, hovering outside my window above END_OF_DOCUMENT_TOKEN_TO_BE_REPLACED