His last words were, “It’s not fair.”

I remember the first time I read the story about Vincent Chin. It was in Helen Zia’s book, Asian American Dreams: The Emergence of an American People. I was reading it for my senior thesis in seminary, which also became a huge influence on my writing Making Paper Cranes: Toward an Asian American Feminist Theology (Chalice Press).

I was randomly sitting in a Panera. I can’t remember why. I might have gone to do laundry and wanted to sit somewhere cozy. I do remember that after I finished reading this story I started to weep right there. In public. Into my over-priced pastry. It was embarrassing but I really didn’t care, I just couldn’t hold it back – they were tears of grief and anger. How am I only now learning about this story? What else am I missing?

Why is he important? In another blog I linked to Frank H. Wu’s New York Times Op-Ed “Why Vincent Chin Matters.” He is the author of Yellow: Race in America Beyond Black and White which was another book formative in my faith and identity development. Wu recounts the story here:

On June 23, 1982, in Detroit, a young man named Vincent Chin died. Four nights earlier, he had been enjoying his bachelor party with friends at a local bar when they were accosted by two white men, who blamed them for the success of Japan’s auto industry. “It’s because of you we’re out of work,” they were said to have shouted, adding a word that can’t be printed here. The men bludgeoned Mr. Chin, 27, with a baseball bat until his head cracked open.

The men — a Chrysler plant supervisor named Ronald Ebens and his stepson, Michael Nitz — never denied the acts, but they insisted that the matter was simply a bar brawl that had ended badly for one of the parties. In an agreement with prosecutors, they pleaded to manslaughter (down from second-degree murder) and were sentenced to three years of probation and fined $3,000.

It has been a long time since Vincent Chin. His murderer lives a quiet life in Nevada, never having served a day in jail. That continues to haunt me. But when we remember Vincent’s story, we remember that this work isn’t done.

After 9/11 I started to hear how people I knew–the ones that looked foreign and alien–were being verbally assaulted by total strangers. Sentiments like “Go back to your own country!” were constantly thrown into their faces, and there was that look I started to see in people’s eyes when I was out with my parents. It was a look that hinted at the slight electricity in the air from the feeling of suspicion and distrust that was unspoken but clearly there. It was a look of “Why are you still here?”

My father was on some sort of blacklist for the TSA. We have no idea why his name was on this list but it might have had something to do with potential terrorist names, and that he happened to have the same name. For a while it made it difficult to get flights anywhere. I barely thought about it at the time because I was grieving the atrocity of 9/11 but later I kept thinking about it.

I kept thinking about how my parents and I immigrated to the US, a nation of immigrants, and became naturalized citizens. We became legitimate citizens of this country, and my parents had forfeited their previous citizenship. We became Americans.

A few years ago I was with three college girls for our summer weekly Book Nosh sitting outside at People’s Park, and we were about to dig into some of the characters of CS Lewis’ The Great Divorce. Everyone was slurping up some iced coffee drinks and other summery liquid confections, and in a wonderful mood, I think, with the air cooling down, the sun slowly setting into a dusky serenity. And then two young men walked up and asked out of the blue:
Can we ask you a question? What do you think about the American Dream?

They were doing some kind of project for a journalism class. Their professor encouraged them to talk to random people about their thoughts on the American Dream. I was pretty much at a loss for words, but I listened to the other girls’ descriptions of “opportunity” and “success” as well as how it is a pretty antiquated label. I can’t think of the last time I actually heard anyone use the phrase unless to make fun of it.

But, my mind turned toward my parents. I imagine that some version of the American dream drove them to immigrate to the US. After being here for thirty some years I wonder how they would have described the American dream to these students.

Thinking about our immigrant history I can’t help but turn towards Jose Antonio Vargas’ story. In 2011, he wrote an incredible essay for the NY Times “coming out” as an illegal immigrant, and then recently I saw a TIME tweet about an article called “Inside the World of the Illegal Immigrant” and his project Define American:

There are an estimated 11.5 million people like me in this country, human beings with stories as varied as that of the U.S. itself yet who lack a legal claim to exist here. It’s an issue that touches people of all ethnicities and backgrounds: Latinos and Asians, blacks and whites. (And yes, undocumented immigrants come from all sorts of countries, like Israel, Nigeria and Germany.) It’s an issue that goes beyond election-year politics and transcends the limitations of our broken immigration system and the policies being written to address them.

How difficult it was for my parents, even for my father, who did everything “right,” in terms of the naturalization process, much less those who seek refuge here because of some violence or oppression in their home countries. And that’s a part of the picture that most don’t understand about immigration. It’s much more than simple legality or citizenship. And I don’t have to get into how there is something wrong with the discourse, which is at the very least, dependent on vilifying language. The words that qualify immigrant, and not just “illegal,” tend to dilute the wide range of possibilities and circumstances that people face in this country. These are human beings, not just potential tax-paying citizens or machines for the factories. My parents tried their hand at so many businesses, and all kinds of work, and I remember how much dignity they set aside, not only to scrape by, but to be visibly accepted as real US citizens pursuing the same goals of work, home, and family.

And so, they’ve never truly become or felt one of “us.” They’ve always felt like a “them.” A stranger. An outsider. Even maybe an enemy “out to steal American jobs.” They’ve never felt totally safe or comfortable. Even in the church community at regional meetings with other pastors and church leaders (yes, predominantly white) they often sit separate and by themselves. And no one ever talks to them.

I haven’t experienced the same immigrant struggles as my parents. That’s partly because of the second generation experience. But I have experienced discrimination and racism, aggressions – both macro and micro. I still get comments like “Your English is good!” or “You have no accent?” or the questions “How long have you been in this country?” or “Do you have dual citizenship?” … Until people stop asking when we think we will “go back to our own country,” I’m not sure any of my family will ever feel totally at home here.

Father’s Day is coming up soon. I have a father and a father-in-law. Both my father and Tom clearly embody the American Dream in different ways. And yet, at the core, despite one being staunchly Korean and the other being born to a Czech immigrant, one who does a mean chipped ham sandwich and the other who grows peppers and perilla plants every summer, one who has been in ministry for over three decades and the other involved with church for so long before becoming ordained for ministry…they both are men to admire, respect, and thank.

The American Dream may not be applicable anymore but whether it’s appropriated by immigrants or reinvented by the majority culture, there really isn’t an American Dream anymore…it’s just the Dream, and every human being has one, and has a right to live it out. 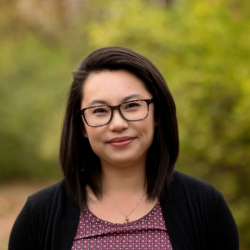 Mihee Kim-Kort
Mihee Kim-Kort is a Presbyterian minister and serves as the staff person for UKIRK at IU which is a campus ministry outreach at Indiana University. She is the author of three books: Making Paper Cranes: Toward an Asian American Feminist Theology, Streams Run Uphill: Conversations with Clergywomen of Color, and a book coauthored with her husband Andy Kort called Yoked: Stories of a Clergy Couple in Marriage, Ministry, and Family. When she's not chasing after her three children or trying her hand at community organizing she's writing essays, articles and blogs one sentence at a time at MiheeKimKort.com.