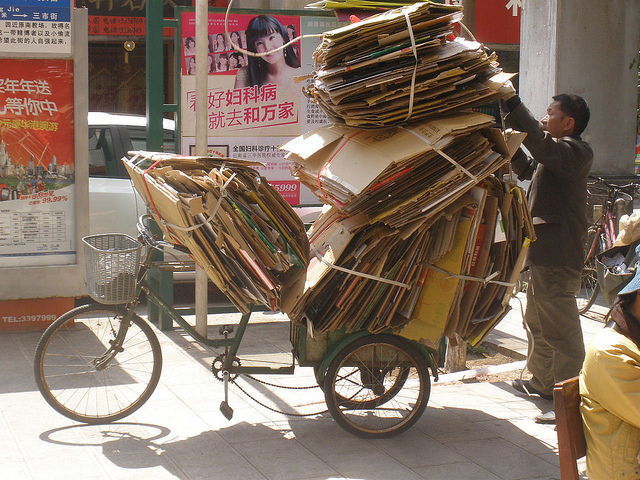 “White woman, why water full of sorrow flow from face?”

The young woman’s Chenglish needed no translation and neither did my tears as she poured rosewater into a wooden bucket to soak my feet. She was wearing a Louis Vuitton jacket, sequined sweater and rice hat: a fashion style as common in Kunming, China as polyester and panty lines at Walmart.

I pointed to my wedding band, and tried a phrase. “Wú zhàngfu bu sǐle.”

Either she understood that my husband left me or she thought I lost my luggage.

Yes, Mr. Death-Do-Us-Part announced he needed a hiatus from our fourteen-year marriage, an announcement horrible to endure in any language, but especially horrible while living light years from normalcy in Southwest Asia. I rewarded myself with a Chinese foot massage.

“Xie Xie,” I gave the kind woman a smile.

I walked out of the small salon and picked up some bootleg Ray Bans from a street vendor to cover my panda eyes, still dripping with mascara. I noticed another friendly face, the neighborhood recycler. He was a cross-eyed old man who pedaled around on a tricycle, hunting through the trash to give it a new life. He flattened boxes of every kind, stacking them on the flatbed behind his seat, then tied empty plastic jugs of oil to the sides with reused string. I marveled at his belief that anything can be repurposed, even rice bags. I realized that I belonged on his recycle-cycle. I had to reinvent myself into something new.

I learned a few lessons from the assorted objects on his vehicle that I’m recycling back to you.

In other words, know who you are and what you can be. Whatever you do, don’t focus on why you ended up in the recycle bin. Instead, discover what you are made of. It’s okay to spend fifteen minutes a day sobbing about your problems if you spend thirty minutes focusing on your strengths. They might be your creativity, your tenacity, your ability to put on a mommy face and get through the day. You are made of more than sugar and spice.

Even the ones that are harder to remove from a beer bottle. The word “separated” gave me false hope in a marriage that might not come back to life. I had to erase it from my mind and focus on my dreams and travel that path. If a repaired marriage is on that road, good. If it’s not, that’s good, too

Every kid knows a refrigerator box is more fun the second time around. With a little imagination, it turns into a rocket ship or countless other things more amusing than packaging bearing manufacturer information. I could look at myself as middle-aged and alone or as someone with no strings attached and a taste for adventure

Beware of Tissue with an Issue

A friend learned the hard way not to buy a local brand of Chinese toilet paper because it wasn’t heat treated, the recycled fiber causing a nasty infection where the sun doesn’t shine. Lesson to be learned? Don’t carry around damaging thoughts of my past into my new life. That means no blaming future unhappiness on villains or circumstances of the past.

There is an old Chinese proverb, “A man who has committed a mistake and doesn’t correct it is committing another mistake.” In other words, now is the time to try something new. It could be a hobby, hair style, a class, or zip code. No matter why you are repurposing yourself, you can create a swan out of your circumstances. You have the option of crinkling it up into the trash or patiently folding your life into something beautiful.

I have returned to America with a wok and no tears, which makes me excellent at my current job: chief onion slicer in a community kitchen. And every time I see the triangular recycle symbol on a green trash bin, I think of the recycler on his tricycle in China.

I am made of stronger material than I originally thought.

Ginger
Writer at 7 Foot Marlin
Ginger lives with her seven foot marlin at the Chelsea Hotel in Chicago. Along with working on her next book, she blogs regularly at 7 Foot Marlin. You can email her at 7footmarlin (at) gmail.com. This photo was taken in Madrid, on Ginger’s first solo adventure in the recycled bin.

Latest posts by Ginger (see all)