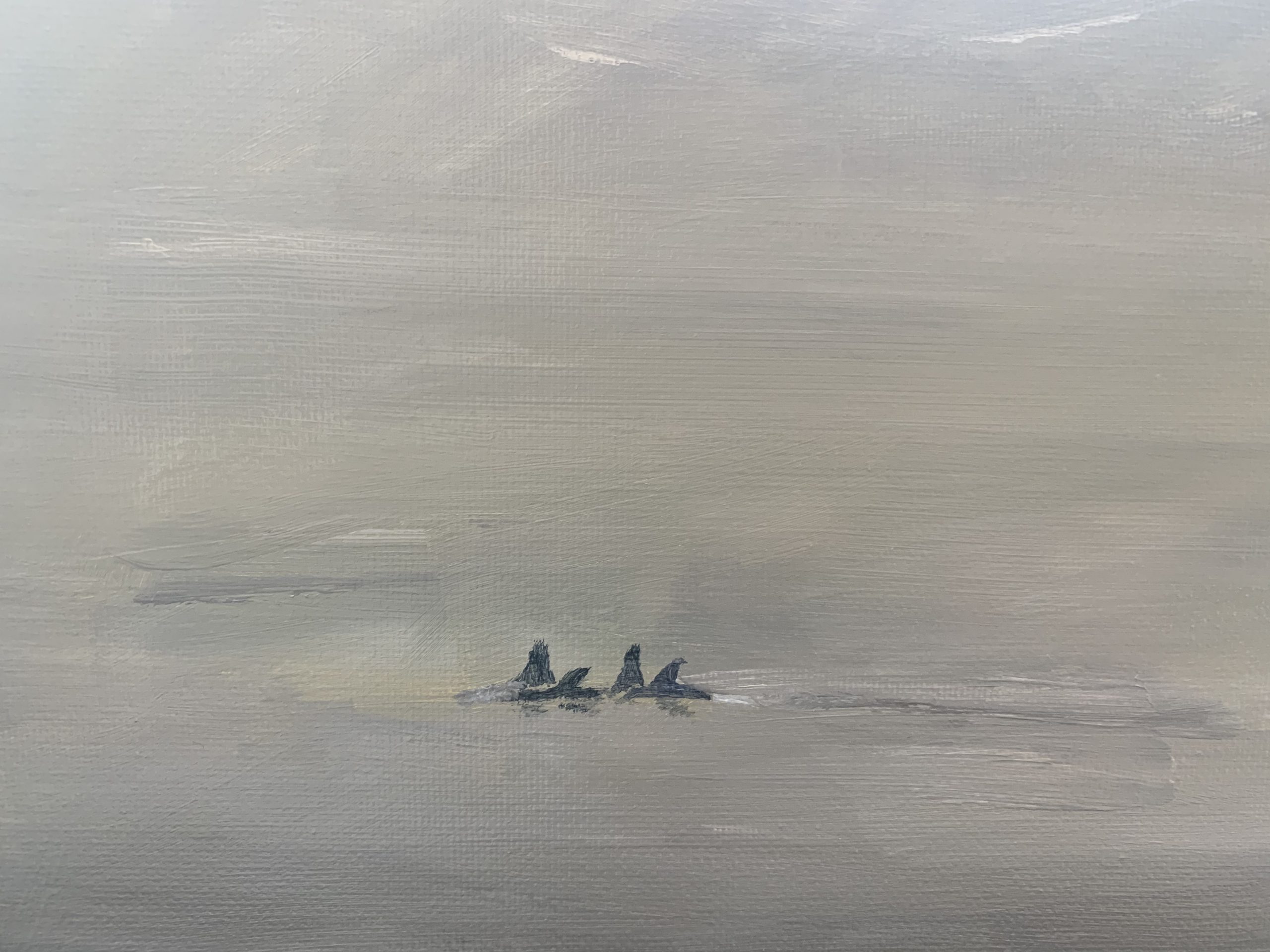 Fog rolled in last summer, hovering outside my window above the Puget Sound for weeks. It obscured what is familiar, the landscape of the everyday. I could not see two feet beyond its heavy curtain. In the distance a foghorn bellowed, “I am here” to boats, creatures, people displaced by limited vision.

From the shoreline I watched a family of seals surface a few feet short of the heavy curtain. Each broke the water’s edge for a momentary gasp of air. One by one each dove down, pressing forward against the current. Together, they drifted into the mist.

I remained onshore as their speckled heads swam away. As I peered closer into the fog a black triangle rose above the waterline, then one, two, and  three behind it. Each graceful curve became clearer through the vapor. A soft puff of breath sounds confirmed my perception: a family of orcas was passing by.

I strolled along the shore beside them, watching their bodies dip above and below the hazy horizon, listening to the rhythms of their breath songs.

The gift of discernment can lead to the unexpected. Even better, it can lead to witnessing something spectacular, something rare, or something greater than first imagined.

The gift of discernment can lead to the unexpected. Even better, it can lead to witnessing something spectacular, something rare, or something greater than first imagined.

In the midst of cloudy conditions we can choose to press forward or panic. The choice is as fleeting as the mist itself.

Yet you do not know what your life will be like tomorrow. You are just a vapor that appears for a little while and then vanishes away. James 4:14

Discernment involves looking through the vapor and the smokescreen to uncover what is truly there.

Discernment is the ability to tell things apart—to separate them, even when they appear to be very similar. People with discernment are able to make keen observations about things. Discernment is often thought to be an ability of those with wisdom or experience.[1]

In a world blanketed with uncertainties, we must sharpen our acuity. We must deepen our peripheral vision. We must exercise our sight muscles to examine what is true. We must take things apart until we are able to sense of the entire picture.

This practice of examining and turning over demonstrates the dictionary definition of discernment: acuteness of judgment and understanding.

The word think in this verse is logízomai in Greek, to take an inventory.

When we examine and take inventory of what seems unclear in light of God’s word, we are better prepared to understand  uncertainties hidden in the fog before us. Over time perceived shapes will take form, and we learn to discern the obscured.

Clouds are described as the veil of heaven in Hebrew.

Clouds are described as the veil of heaven in Hebrew.

Peering through a veil forces us to gaze deeply into the unseen.

God led the Israelites with a cloud.

The uncertainty of their future kept them dependent on God’s direction each day.

In this age of uncertainty, God still desires to lead us in the same way.

I did not have any idea what to expect. END_OF_DOCUMENT_TOKEN_TO_BE_REPLACED

Places she has been published include The Wonder Years: 40 Women Over 40 on Aging, Faith, Beauty, and Strength, Ruminate Magazine, redbudwritersguild.com, fathommagazine.com, thewritelaunch.com, and mudroomblog.com. Follow her on Instagram @vinabmogg.
Latest posts by Vina Mogg (see all)

The Space Between Darkness and Dawn

Podcast: The Secret to a Life of Words

2 thoughts on “Peering Through Fog”