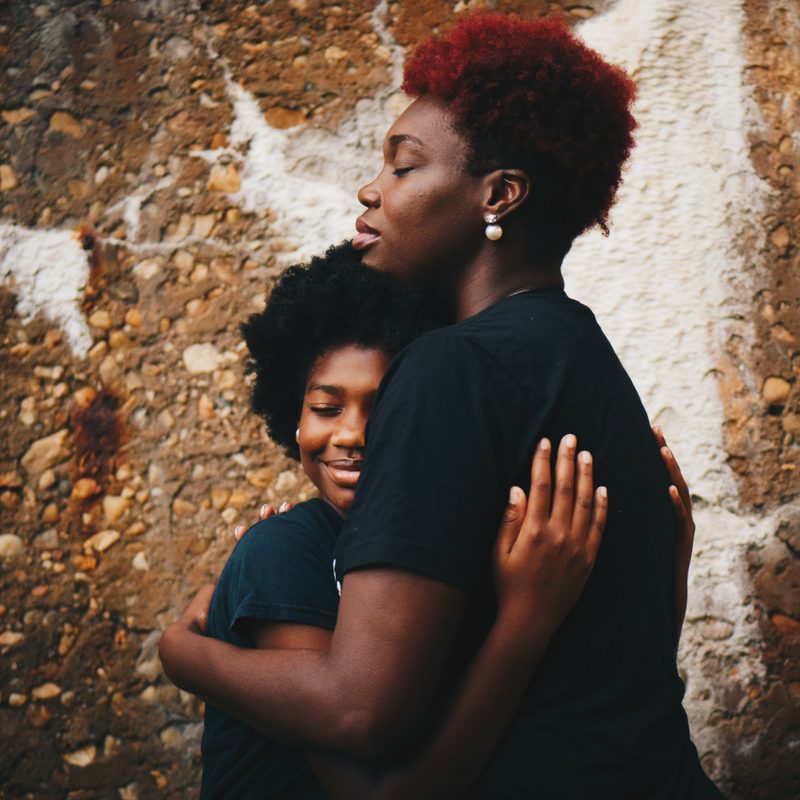 Each morning I was greeted with lots of hugs. Little arms wrapped themselves around my waist and squeezed tight. Swarms of them came at once, their sweet voices proclaiming, “Good morning, Auntie!”

One morning, as Mwikali moved in for her embrace, she peered up at me from under the folds of my t-shirt. Her big brown eyes batted and she flashed me her bright, white smile. She uttered one word.

Those were the years I mothered 49 children.

I became a mom in a non-traditional way. After college I volunteered as a chaperone with the African Children’s Choir, an international aid organization that seeks to educate vulnerable children in order to help better their future. We traveled through five countries, the kids spreading their message of joy and hope through their concerts.

Women who never have biological children can still be mothers. It wasn’t just Mwikali’s hug and tender word that taught me this. It was a slow process, an eventual realization that I was doing this parenting thing. There were the sweet moments spent curled up on their bed, reading a bedtime story while she played with my hair. Then there were times that I told a terribly bad joke and watched his face scrunch up in uncontrollable laughter. And the sweet hugs; feeling those small fingers wrapped tightly around your waist, while her cheek nuzzled against you.

And there were the harder moments.

One evening shortly after tucking the kids in, Ruth came to me with tear stained cheeks. I urged her to tell me what was wrong but her heaving shoulders made it hard for her to speak. After some gentle coaxing, I discovered she had woken from a bad dream about harm being done to her family. As I hugged her and stroked her back, I realized I didn’t know specifics of her family history. I didn’t know if this bad dream was based on actual occurrences. Maybe it was a recurring nightmare. I wasn’t sure how to best comfort her. In the end, I sat quietly and held her until the sniffles subsided.

There were other hard moments. When Galale scraped his knee in a traumatic soccer injury, I swooped in with Band-Aids and antibacterial ointment. When Maureen was struck by a bout of homesickness, I did my best to comfort and encourage her. And when the kids grew annoyed at me for disciplining them, I held my ground. I desperately wanted them to like me, but I reminded myself that if I was going to do this parenting thing right, there were going to be moments where they didn’t like me much at all.

My 49 children opened my heart to new possibilities that I wouldn’t discover for another five years. That’s when my husband Drew and I began the baby discussion.

I always assumed that babies were part of the equation. It was the natural course of life. You get married, buy a house, and have babies. So, Drew and I discussed having a baby. We considered sleepless nights and dirty diapers and no free time ever. We laughed nervously. Each time the subject was discussed Drew would end with the same joke.

“Why don’t we adopt a teenager and try it out for a few years?”

One day Drew made his joke for the 50th time and I gave the obligatory eye roll. But suddenly it didn’t sound like a joke. We had recently watched the movie The Blind Side and were incredibly moved. And even though it had been five years since my time with my 49 African children, the love I felt for them was still strong. I hadn’t birthed them but they sure felt like my kids. The possibility of adoption began to bloom in our hearts; specifically, adopting an older child.

We heard heart-breaking stories of children in foster care and how they’re tossed from house to house with no real place to call home. We read a newspaper article about a 17-year-old boy who went before a church congregation, begging for a family. Research revealed just how difficult it is for older children to find permanent homes. My heart ached as I thought of the thousands of children in the foster care system, desperate for normalcy. The more that Drew and I discussed bringing an older child into our home, the more it felt right.

We are only at the beginning stages of adoption and I continually remind myself that it will not be an easy journey. I won’t know the things that haunt them or the dreams they have for their lives. And I know how difficult it is when they awaken from a nightmare and you realize you have no idea what the past held for this child.

But then I remember the other moments, the tight hugs and melodious laughter and the way my heart melted at one simple word: “Momma.”

Jamie Kocur
Jamie Kocur is a writer, singer, and songwriter who lives in Tallahassee, Florida with her husband. Her favorite memories include snuggles and crazy soccer games with her kids from the African Children's Choir. These days she reads lots of memoirs, chugs coffee, sips red wine, and strums her acoustic guitar.
Latest posts by Jamie Kocur (see all)