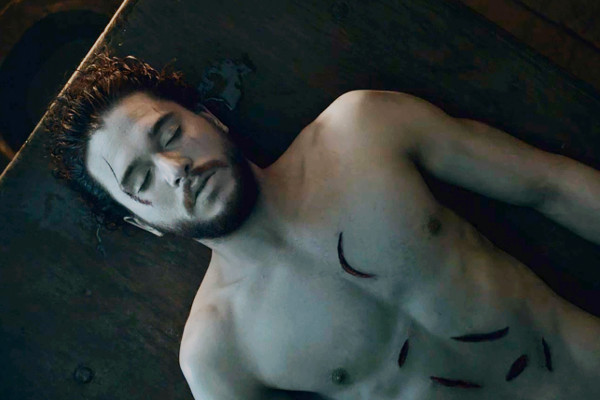 “The fact that I have even come this far is evidence of how special America truly is, and all the reason more why we must do all we can to ensure that this nation remains a special place.” – Marco Rubio

“Make America great again.” – He Who Must Not Be Named

America. That special shining city on the hill is apparently tarnished and desperately needing a good polish. But what does it mean to restore something? The implications are that the thing is dead or dying, and that life needs to be brought back. To some, we are faltering on the edge of greatness, and the question is, are we a main character on the world’s stage who is too important to kill off? Or are there parts of us that should stay dead?

Maybe America just needs Melisandre and her resurrection spell. “We beg the Lord to share his fire, and light a candle that has gone out.”

If you listen to these politicians, you will come away with the idea that America is extraordinarily special, that for 10,000 years no civilization has ever had what we have, ever ever ever. Yay America. Land of the magical bootstraps.

It’s as if our notions of democracy, freedom, and Constitution just dropped out of the sky, a prepackaged system. Just plug in one president, one supreme court, 2 halls of congress, a lot of money, and hit the power button!

But they didn’t. We have a system that we created from ideas farther in the past, and it does have glimmers of greatness, and surely we have ideals that are worth struggling for. But they came from somewhere. We are not uniquely brave or tolerant. We do not have an extra dose of equality or freedom in our bones. And to act as if we do, as if we are supercitizens gifted to the world, glosses over our gaping deficiencies.

Cruz in his concession speech Tuesday said that America believes in equal rights for everyone. That we stand up to evil and injustice.

But this isn’t true. If we know history, we know this. We know that sometimes we are the perpetrators of evil and injustice. So are we renewing a myth? Or are we willing to let some parts of our character die?

George R.R. Martin, talking about death, says when “a character has gone through death, that’s a transformative experience. . . My characters who come back from death are worse for wear. In some ways, they’re not even the same characters anymore. “

Should America be restored to the same thing it was 200 years ago? Or 100 years ago? Or even 50 years ago? “We are not boastful or mean spirited,” and yet Fox News had to close comments because of blatant racism. What do they want to restore us to? What are they trying to renew?

We need to be clear on this point, because lives and the quality of lives hang in the balance. Casting a vote isn’t something we do just for fun on a Tuesday. Election results are not just to watch Wolf Blitzer get all worked up. Our society turns on the results of ballot boxes.

“We do not seek to enrich ourselves at our neighbors’ expense,” Cruz says.

And yet our highway system, our gentrification, our electronics screams otherwise. How can our renewal be authentic, and not just another layer of myth?

Is there a way to stare down our history, putting to death the things that need to die, while still calling new ways of being to life?

Maybe our national character should change, should in some way not even be the same country anymore. We lay claim to this rich history of settlers, pilgrims, and immigrants, while denying an equally as expansive history of refusal and exclusion.

In order for there to be resurrection and renewal, something has to die. There is no way around that process. And maybe it will leave us staring at each other, wondering did that really happen? Is it really dead? What will happen next?

What will happen next if we take racially-based income inequality seriously?

What will happen if people in authority are held accountable for their abuse of it?

What would the country look like if we reduced our military budget and closed offshore loopholes?

What possibilities would exist if everyone who could vote was allowed to? If private prisons were abolished. If people refused to participate in gentrification.

What forms of renewal would be possible if we were willing to kill the mythos of America?

“From darkness, light. From ashes, fire. From death, life.”

A nation’s eyes burst open, in a dramatic gasping of air.

Fog rolled in last summer, hovering outside my window above END_OF_DOCUMENT_TOKEN_TO_BE_REPLACED

Icons of Dehumanization: Then and Now

Beyonce and the Imago Dei

2 thoughts on “Killing Off the Mythos of America”