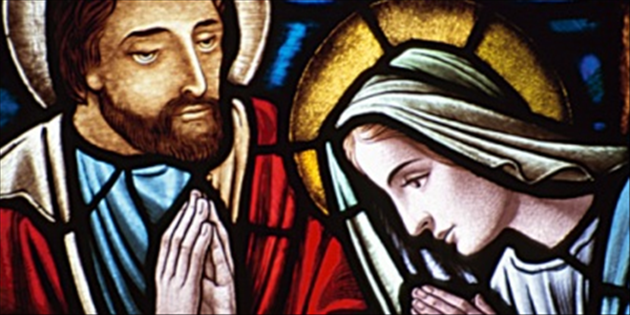 The last portion of Matthew chapter one is a narrative focused on Jesus’ earthly father Joseph. Betrothed to Mary, he hears that she’s pregnant and decides to divorce her quietly. Before he does so, he is visited in a dream by an angel who informs him that she is not only pregnant by the Holy Spirit but also carries the fulfillment of prophecy. The chapter ends:

“When Joseph woke up, he did as the Lord’s angel had commanded him. He married her but did not have sexual relations with her until she gave birth to a son. And he named him Jesus.”

Sometimes, we have to hold desire instead of avoiding it: we practice self-control. Joseph must have been holding desire. In the eyes of his culture, he had the right to have intercourse with his wife, but God said literally to hold off. So, he traveled with her and likely shared a bed with her, but the regions of their bodies that must have ached with longing they kept apart.

Rather than the principle of giving into desire in our hypersexualized culture—which often equates sexual attraction to love—we’ve tended toward one loud response: avoid potential objects of desire.

We’ve made the mistake of assuming that self-control is simply avoidance.

There is historical precedence here. In the fourth century, Gregory of Nyssa wrote in On Virgins that a virgin must “place between himself and the pleasures of the senses a high strong wall of separation, so that in this his approach to the Deity the purity of his own heart may not become soiled again. Such an impregnable wall will be found in a complete estrangement from everything wherein passion operates.”

But outside of the singleness that someone may choose in joining an order, conservative Christians can skew toward avoidance as the only way to respond to sexual desire. We’ve made the mistake of assuming that self-control is simply avoidance.

When the courtship movement among evangelicals was popular, I observed friends jaded through attempting a relationship with someone of the opposite sex in which they had no opportunities to spend time alone. They avoided any situations for sexual temptation. In one, they got married, realized that they didn’t know each other, and decided they weren’t compatible.

A third way, besides giving in or avoidance, can be called for, and that is the way that Joseph took. He held desire. If the focus is avoidance, we may deceive ourselves that we are not embodied, until as a counselor once told me, desire will bubble out. I avoided desire for love and sexual intimacy as a young person by avoiding men. When I finally started dating, I was shocked to find that my first boyfriend’s touch didn’t feel dirty but instead affirming. I was in a situation in which I suddenly didn’t know what my boundaries were.

We’ve taught strict avoidance rather than the dependency on Christ it would take to engage with desire, holding it, instead of its object—acknowledging it but finding the grace needed for self-control.

Avoidance is seen in the negative response to the online talk of the fear of more Christian organizations adopting the “Billy Graham rule” in light of the sex scandals. The rule is that a man and a woman are not allowed alone in a room or even in a public place together without some other known party. The problem, of course, is that because most leaders are male, women colleagues are disadvantaged in their access to power compared to their male equals.

As Halee Gray Scott wrote, this rule is well-intended, but Christian communities and couples could do a better job in generating boundaries together that do not discriminate against women. Although my husband and I have never formally stated this to one another, we tell each other about our one-on-one time with the opposite sex. I’m also in agreement with Katelyn Beaty that there’s a difference from meeting one-on-one at work and meeting for a cocktail later.

What if we were called more frequently than we realize to hold desire instead of avoiding it? Gerald May writes in Addiction and Grace that we would have to be honest with ourselves, we’d have to seek out trusted friends or a spiritual director with whom to be vulnerable, we’d need to talk internally with God while we were experiencing it. Holding desire can be distressing in the process, but I know personally its effectiveness.

What if we were called more frequently than we realize to hold desire instead of avoiding it?

This is a vision of chastity that is attractive. It brings us into emotional and spiritual intimacy with Christ and our Christian community. It’s not harmful to women either, leading them to be either disadvantaged as employees or to believe that physical intimacy will feel shameful.

With this vision, we can respond to the accusations of repression that we hear from secular culture. In Holy Longing, Ronald Rolheiser describes that “we lack chastity when we cross boundaries prematurely or irreverently, when we violate anything and somehow reduce what it is. Chastity is respect, reverence, and patience.” He is careful to say that we don’t lack passion. Instead, we seek God’s help in self-control.

For some situations, self-control does require the avoidance of the object of desire—a spouse may have fallen into a relationship with a colleague that’s become too tempting and must break it off by finding another job. But these situations are rare, and if they’re not, then the individual may need long-term intervention through counseling and pastoral care.

Holding desire—practicing self-control—means you get close to Jesus, humbled in the process. After months of waiting, Joseph tended to a wife experiencing the messiness of birth in the humblest of places, a stable. He held the naked, scrunched-skin “desire of the nations” in his arms, and he named him the Savior of the world.

Fog rolled in last summer, hovering outside my window above END_OF_DOCUMENT_TOKEN_TO_BE_REPLACED

Losing and Finding Your Tribe

Dear Portia: Do I forgive my church family, or speak up?

A Reflection on Finding Community in the Church

3 thoughts on “Joseph During a Season of Sex Scandals: Self-Control Is More Than Avoidance”