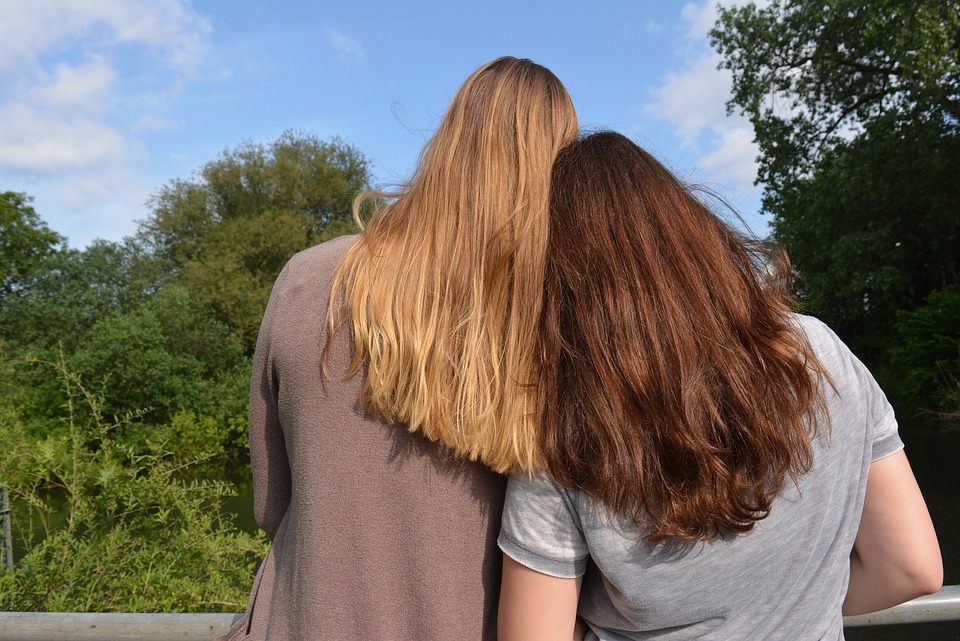 I’m not good at friendship.

Myers-Briggs tells me that I’m an INTJ, which is a fancy way of saying, “Doesn’t play well with others.” While I certainly don’t hate people, I don’t always understand them. Half the time I don’t even understand myself. Give me the world of the mind, the place of concepts and dreaming, not the confusion of humanity.

That retreat into headspace? It’s not all just how I’m wired. Wounding plays a role, much as I’m loathe to admit it. More than once my friend picker has been broken and I’ve ended up investing in unsafe people. Perhaps inevitably, this has led to lasting hurt. And so I’ve erected walls.

Save for a few who have proven to be true and were grandfathered into the “Don’t Get Too Close” clause, I have operated on the assumption that anyone new who crosses my path will hurt me in the end, no matter how genuine and warm they seem. When I find myself longing to get to know one of them better, I poke at the never-quite-healed sore and remind myself that the pain isn’t worth it.

So imagine how I felt when asked to lead a small group.

Bible study, sure. That’s my jam. I can talk about context and structure and meaning all day. But being involved with people? Being in charge of somehow bringing together an unknown assortment who would land on my doorstep?

But, you know, God has a sense of humor. I don’t think He likes to watch us squirm, but He is certainly all about getting us out of that revered comfort zone and into the place He’s prepared for us. A place beyond our control.

The first official meeting of what would become “Messy Mondays,” I was in the middle of beginning to wrestle through yet another broken friendship when this band of misfits of all ages and sexes traipsed into my living room and altered my life forever.

One of my rules for starting this group was that everyone show up in their sweatpants that first night. I wore no makeup, because if they were going to come to this group I was leading, they were going to get the “warts and all” version of me. The cranky me, really. I promoted both things as “vulnerability” and “authenticity,” but what it was really a defensive move. Level the playing field, so to speak. Nobody was going to look “better” than anyone else. Nobody was going to put on some show and slip through my defenses again. (Of course I didn’t stop to think too deeply about this. Anyone can put on show no matter how they present themselves).

Isn’t it strange how we can build walls when we think we’re working to tear them down? My idea of being “real” was one more way of keeping people at bay. Just goes to show that our human ideas and effort always pale in comparison to what God has in store.

Over the last year our group has dealt with divorce, chronic illness, disagreements over politics, differences in learning style, anxiety, depression. We’ve also had moments of intense joy and sidesplitting laughter. Along the way, I have slowly felt myself opening up to them as they have slowly opened up to me. In their honesty, I have been encouraged to be honest. They’ve accepted me in that. Even when I don’t make sense or even when they think I’m wrong, they accept me. In that I’ve learned to take leaps of trust. I’m learning to battle the lie that everyone and anyone will hurt me just because a few have.

I don’t know if I’ll ever be good at friendship. I’ll probably always feel awkward and a little out of place. I can’t make small talk if my life depended on it. My preferred plans for a Saturday evening include Netflix bingeing or reading. If I could communicate with the world solely through texting, I would. But, slowly, this beautiful, broken group is teaching me how to give it a go. They’re showing me that vulnerability can be a good thing. They are living out grace and acceptance.

That, I think, is the kicker. Acceptance. I am on a journey to learn to embrace who I am, flaws and all, for only in the embracing will I find the ability to cast myself into the arms of Christ and ask Him to remake what needs to be remade – in His image. Nobody else’s.

Their acceptance has led me to question my assumptions, like assuming I’m not good at friendship. What does that even mean? I’ve been trying to live up to some vaguely defined ideal that boils down to “not me.” Surely only the vivacious and outgoing can have good relationships. Surely only the life of the party will be the only one worth spending time with.

There’s a sharp pain that comes in realizing you’ve been living as if God made you all wrong.

If I were a betting woman, I’d wage good money on the belief that you’ve also dealt with this. I can’t be the only one on the planet who gets all goofy and worked up over what it looks like to be a friend. Can I just tell you, one struggling sojourner to another, that you’re lovely? That you, in all your quirkiness, are wonderful? I don’t want to know some fake version of you, some person you think I will like better. Don’t pretend for me and I won’t pretend for you and maybe, just maybe, we will naturally discover how to simply be together on this journey.

In the battle to accept myself so I can in turn accept others and let friendship unfold in an unforced or false way, Jesus has been telling me that I need to stop expecting others to be and do only what He can be and do. In short, I must rest in knowing that He is that forever and true Best Friend that my heart aches for. As I learn to nurture my relationship with Him in a new and deeper way, that will spill over into how I approach relationship with people. I can think the best of them instead of the worst, because I know that, if the worst does come, I am never truly alone.

So if we meet on the street someday, I’ll be brave and give you a wholehearted smile and a welcoming hug. Even if, right after, I blurt out some random historical fact.

Fog rolled in last summer, hovering outside my window above END_OF_DOCUMENT_TOKEN_TO_BE_REPLACED

Marie Gregg
Marie Gregg lives somewhere in the Pacific Northwest with her husband Chris and two fat, neurotic dogs. She loves studying Scripture, libraries and chocolate. You can connect with her over at her blog, Along the Way.
Latest posts by Marie Gregg (see all)