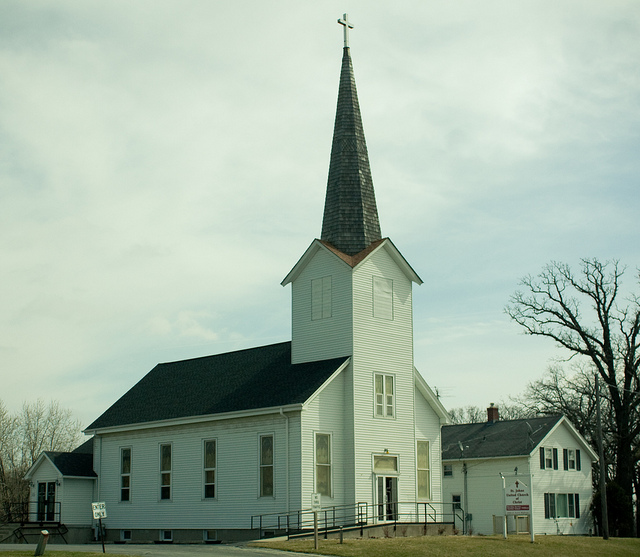 The night my already-sick grandma took a turn for the worse, my husband asked if I thought I’d go to her funeral.

“Oh, hell no,” I said, without thinking.

He looked startled, there in our bathroom. We were getting ready for bed, letting our bodies slow down for the end of the day.

But now my heart raced with the thought of sitting cheek by jowl with my family and extended family.

I couldn’t imagine sitting in that room with any kind of peace.

Look, I love my family. If you met any one of them you would scratch your head at how a bunch of nice people could make my heart race. But oh, dear sweet Jesus, my family is complicated. Thinking about the funeral meant facing a Gordian knot of painful history.

And on the extended front, I like my cousins and my aunt and uncle, but seeing them can be awkward. I grew up across the country from them, and as a result, we don’t know each other well. That hurts. It hurts worse when we shake hands, make small talk, and say goodbye for another decade.

And I loved my grandmother, enjoyed her company, but even so did not know how to quit my bitterness towards her.

Mix all that in a hot dish and my decision was clear: stay home.

“I think it’s healthier for me not to go,” I told my husband. This year I’ve gotten honest with everyone—including myself—about my complicated family. I’ve quit my childhood role as fixer and bridge-builder. I’ve learned boundaries.

Picking up my toothbrush, I was sure health meant letting myself off the hook, no matter who I disappointed.

As I brushed, I thought about my grandma. It pained me to think of her with anything other than gratitude. I thought of the last time I stayed with her, how I padded through her kitchen, safe breathing its particular scent.

Teeth brushed, I softened a bit. “I wish I could see Grandma again,” I said. As she’d gotten worse over the last five years, I’d kept pushing the idea of a visit away. I wasn’t ready, I thought. Except now, I swallowed the smallest, sharpest needle of regret.

“If she gets better, I’ll go see her,” I said when we were crawling under sheets and holding hands to pray. “I think it’s time for me to let go of this bitterness.”

But she didn’t get better. A few days later, she died.

At my grandfather’s funeral when I was a teenager, I felt guilty that I didn’t know what to feel. It was November in Michigan, and snow had fallen before we’d come, but now it was almost melted, grey and icy and ugly. My heart felt the same.

My other two grandparents died years later, and I didn’t go to either of their funerals. I had good reason each time, but not going said something to me and everyone about my priorities, didn’t it? It meant that my grief was pale enough that I could keep going about my business as if nothing had happened.

Maybe that’s the other reason I didn’t want to go to my grandmother’s funeral. I hate my own numbness towards my family, my sense of helplessness and stuck-ness and bewilderment.

I was afraid of sitting in the church again and feeling empty instead of sad. I was afraid of what my empty heart said about my capacity to love other people.

My mom texted me the news of my grandmother’s passing early on a Sunday. My heart sank.

There would be no last visit.

And all of a sudden, with a shock of surprise, I realized I had changed my mind.

Suddenly, all my earlier worries about surviving an awkward gathering seemed irrelevant. I’m almost forty, I love these people, and nobody was going to yell at me. Sure, I might be awkward and socially inept, but that’s just me, funeral or not. Would it really kill me to show up?

They held the memorial at my grandmother’s church in rural Michigan. On the drive, my siblings and I almost hit a stock-still snapping turtle in the middle of the road, its head held high and unfazed.

When the funeral started, I found myself tucked next to my cousin’s wife, Jill, whose name I had had to ask for yet again, and her wiggling two year old. The pastor spoke about my grandmother, about her childhood on a dairy farm, her favorite sheep, her sewing awards, and to my surprise, I started to weep.

I wept for my grandmother, for never knowing her as well as I wanted. For holding on to unforgiveness and bitterness even when she was old, and sick, and simply human. I wept for my family, and all the healing we still need. I wept that so much of our story is out of our hands, that I cannot go back to my childhood and fix what went awry. I wept, my shoulders shaking. I could not get control of myself.

Jill put her arm around me, tight and comforting.

When I finally looked up, her son was staring at me with the pure compassion only small children have, a sort of heartfelt worry that I was in pain.

I smiled at him to reassure him, and wept a little more. This time, though, it was from joy, that I had come, that I had been welcomed, and that God had granted me the tremendous gift of real, heartfelt grief.