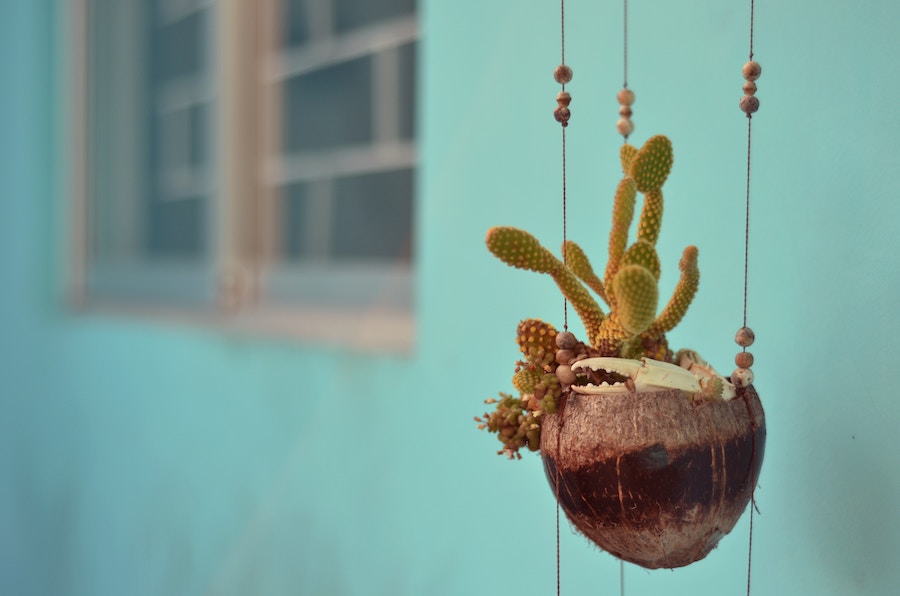 Last night, after I finished packing for a long trip, I decided to move all my succulents outside for the duration of our weeklong vacation. I have nine pots of various sizes on the bookshelves in our front room: one tiny barrel cacti, four plants that look like desert seaweed, and assorted echeveria in dark green and sage.

Transport took a few minutes. As I moved the succulents, I imagined them as tiny hedgehogs, porcupines, echidnas, needful of a good run around the kennel while their owners were away.

And then I thought, Wait, how did I turn into a plant lady?

We completed a big remodel last year, and after it was done I realized I wanted my bookshelves dotted with miniature succulent gardens in citrus-colored pots.  I found a lemon-shaped bowl and an old olive oil can at a thrift store, and assorted crockery at Home Goods. Then I stopped by a succulent nursery for plants. At home, I spread a mat to catch the soil while I potted, wrapping the barrel cacti in a cloth so I didn’t get bitten.

I also worried. Succulents are hardy, but I have never done particularly well with plants. Mostly I don’t water them enough (which is why I chose succulents). But succulents have their own problems—they rot easily; they need a lot of sun; and like all plants, they thrive in particular conditions.

I didn’t want them to die. Houseplants make me feel like Elliot in ET—their demise somehow affects my own well-being. Malingering plants are zombies: they snuff out optimism, claw at my good intentions, mock my sense of competence. They accuse me of buying things I don’t care for properly. Plants growing in your house are a sign of hope and life; plants dying in your house are…not.

I have always felt resentful when people gave me houseplants as gifts. It was like giving me a litmus test for failure, which I’d pass almost immediately. When the gifts died, I felt bitter. Throwing the carcass away was the easiest solution, but then their ghosts hovered on my windowsill, all accusation.

Yes, I do tend to overthink things.

In my life, I’ve lived in twenty-two homes. I’m tired of moving. When we bought this house, it was with the idea of staying for a very long time. Something about that permanence made me realize the kind of home I want keep: a home without a ton of stuff, with homemade art and decorations, with clean surfaces and tidy shelves.

And, much to my surprise, I wanted plants I would care for intentionally instead of resenting.

I have done a lot of healing here; two years of solo and marital therapy, recovering from childhood trauma, finding my sea legs as a homeschooling mother, coming back to church after a long bitterness—and my vision of miniature gardens felt like a promise of rebirth. I wanted to become someone who can nurture things because she nurtures herself. Someone who can weather failure. Someone grounded enough in the present moment she’ll remember to water the plants.

As I nestled roots in the soil, I told my succulent babies I wanted to help them thrive.

Full disclosure: nearly every one died within two months.

In the past, I would have decided they were a terrible idea, that I could not be trusted with green growing things. But this time around, I took stock. I had one succulent thriving in the kitchen: I barely watered it. There was a succulent I’d abandoned outside nearly two years before, vowing I wouldn’t bother with care (I felt too overwhelmed with children) and it had survived without a human-poured drop.

My nervous watering, then, was probably too much.

I bought more succulents and re-planted them again. I put them on the shelf, and I thought I watered them less—

I was shocked I didn’t blame myself. You’re learning how to care for them, I told myself, with this new self-talk I’ve come to through therapy. It’s hard to learn what they need, but you’re trying.

I bought more succulents, made garden mosaics in each pot. This time, I decided to give each plant a periodic break outside—thus my back and forth before vacation. Succulents are desert plants. If mine spent time in the sun, and I held off on watering them much at all—perhaps I could keep their spiky beauty alive.

And if they died again, I decided, I’d replace them with plants that needed a shady room. I would trust myself to learn to water them properly.

I used to think faith meant erasing the mistakes, meant regrets got chucked into the trash, but the older I get, the more I see that my mistakes, regrets, and shortcomings are the threads holding my rebirth together. Death, failure—these losses are the fertile soil that nurtures God’s work in me.

I now value trying more than succeeding. God uses my puny incompetence more than he does my sure-fire skill.

I decided to become a plant lady on purpose. Honestly, the needs of these green things (alone with my needs, my husband’s and children’s needs, my community’s needs) still overwhelm me. I still fear hurting someone, killing a living thing.

And yet I will try to learn the ways of the tiny barrel cactus, the echeveria, the miniature agave. I’ll trust that if I am willing to be wrong, I will finally learn to thrive.

Photo by Gabriel on Unsplash

I did not have any idea what to expect. END_OF_DOCUMENT_TOKEN_TO_BE_REPLACED

When You’re Afraid of Dying