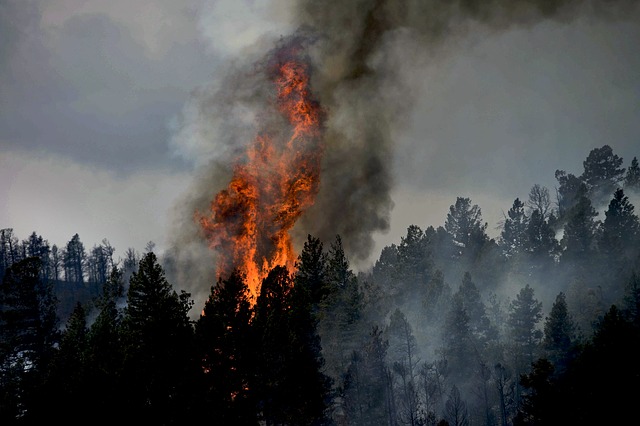 I was alone, at my off grid in-process homestead, when I looked up and noticed the haze collecting in the sky. By alone I mean alone with my small posse of dependents—three kids ages 1 and 4 and 6, plus at the time, a puppy.

There wasn’t so much smoke that it made me worried, but enough that I was curious. I loaded everyone into the car, even the puppy, and drove down to the neighbor’s house where at the time I used the Internet. I said, “Hey, how are you? What do you know about that fire?”

“You’re kidding,” I said. “I thought it was farther away than that.”

“Nope.” She answered without any emotion in her voice. “We saw flames at the turn in the road.”

This moment was two summers ago, our first summer in the woods, and I’ll spoil the ending for you right now. That fire didn’t make the national news, not even a blip. 500 acres isn’t much, even if it is burning, unless you’re talking about a close 500 acres. Which we were.

“I hate the smell of smoke,” my neighbor said. She had been evacuated once before and remembered the wall of sound when the birds passed overhead, escaping en masse ahead of the leading edge of the fire. She shuddered and held her baby close.

I stayed to chat. The older kids played. We had the kind of conversation you can have when you’re collectively watching five children and a natural disaster is just at the bend of the road. Mostly we talked about how other people judge our choices.

For her it was a close relative, for me, more nebulous, I might have said the entire Internet. But for both of us it the dynamic was the same. We each felt the strain of needing to justify your proximity to danger, right at the moment when you most need your faculties sharp and clear to judge the risk.

She talked about a time she was stuck, climbing a rock face, at 1,500 feet and had to wait for help. She said, “I was powerless. I had to learn to be okay with that.” She said, “I think that’s what not everybody knows.”

I nodded. “You get trapped in a life, if you’re never allowed to risk it.” And, I went on, there are risks the other way, too, that no one talks about. Just think. Like numbness, wasted lives, never having a chance to build that internal scaffolding of self that sometimes we call character.

My neighbor and I talked for an hour. I took my babies home. The fire was contained by the next day. It was moving the other direction anyway.

But less than a year later, and I won’t get into these details, I realized that my risk assessment muscles weren’t working properly. I had become so accustomed to justifying risk—and so many risks—I wasn’t always able to correctly read what was going on.

The cause of this was not really life in the woods, not even with the many dangers associated with that. Nor was it that people are so ferociously motivated to give cautionary advice to one another. It was something about the way that those two things fit together.

I was caught between two equal and opposing kinds of pressure, living a dialogue between two things that weren’t me. On one side, the social expectations of the urban/suburban middle class. On the other, the powerful requirements of survival with limited protective infrastructure.

I wished, later, that I had known more people who could understand. I realized, later, that most of the problem was that I was so alone in it, this process of figuring out which things were which, outside of the norms I had been taught by a social code I was intentionally trying to leave behind.

I know more sympathetic people now, these days. A few of these sympathetic people I now know keep bees. I was watching, just the other day as one of them used smoke to calm the bees while opening up the hives. But the smoke doesn’t really calm them. It presents the possibility of a much more grave crisis than the beekeeper. It puts their systems on a magenta level alert, so they don’t notice the more subtle matters of their personal space and time.

It’s been a painful process to realize this, about myself and the state of my family. But also a deeply healing one. It has been necessary and quite beautiful, actually, to comb through the choices I’ve made and untangle the ones that came at odds to one another. The truth is, I am not interested in seesawing between extremes, in relation to norms that I don’t hold sacred. I won’t snap back like a rubber band. I am interested in building my own center, trusting my instincts, living according to a constellation of values rather than a constellation of fears.

We never claimed the path from one place to the other would be simple or direct, but simply worth taking.

12 thoughts on “Fire and Smoke”