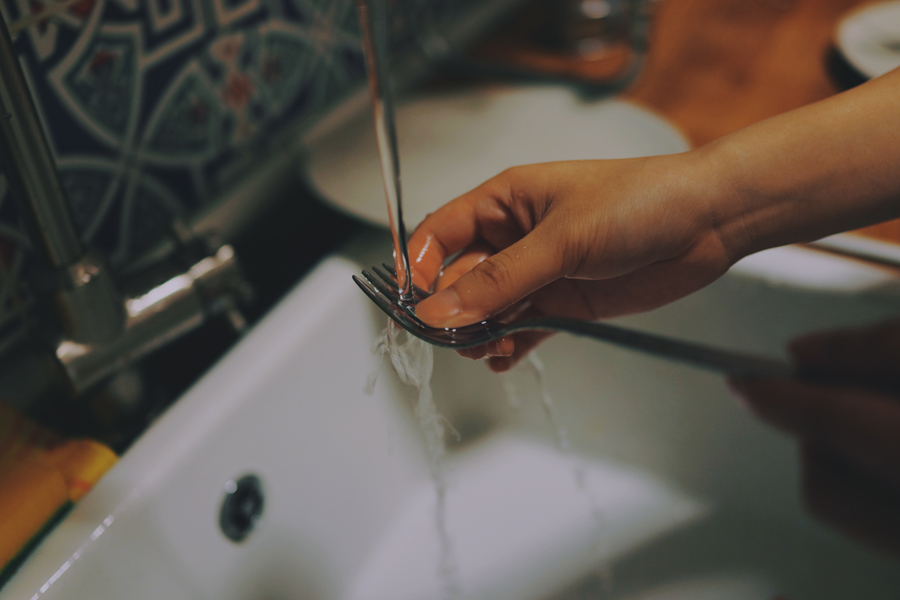 I’ve been asking myself what contentment is lately. This question tends to come when I’m elbows-deep in dish water or staring at my overflowing laundry basket. Sometimes it pops up when my doctor calls with bad news.

While I lived overseas, I had such a deep ache for stability and rootedness. I moved abroad when I was six months pregnant with my daughter and had an anxious two-year old in tow. In my limited perspective, I thought that I would fulfill that longing for rootedness while being expats, so I made the kids’ room absolutely beautiful: covering their walls with hot air balloons and paper airplanes. I felt content in that season.

However, eight months after moving into that particular apartment, and less than two years after making Turkey our home, I was diagnosed with stage three medullary thyroid cancer which is a rare, incurable, typically slow growing, cancer.

Following my diagnosis, we moved back to the States—temporarily, we thought. Our family lived in six different homes over the course of a year. My life suddenly filled with biopsies, consultations, surgeries, recoveries, and medical visits. Our borrowed car filled to the brim with our belongings.

During one move between these transitional homes, my four-year-old son burst into tears and said, “I wanted to live here for lots and lots of days.” Up until that point, my husband and I felt sure we’d go back after this slew of medical treatments ended. In that moment, it became clear to me how my children’s need for stability was in conflict with my calling overseas.

I wrestled with God for quite a while before accepting that Tony and I had to release our very tight grip on what we perceived to be a lifelong calling in the Middle East. We had to surrender our calling to the One who gave it to us. We had to be content in the purposes of God, who gives and takes away dreams and visions—and yet, promises to complete every good work that He begun in Christ Jesus. (Philippians 1:6, NIV)

During those heart-wrenching moments of releasing life overseas and my ten-year plan, I truly started to walk a life of faith. For me, moving around the United States or around the world didn’t seem like a big deal, but staying? I did not see that coming.

Following this surrender of my unfulfilled and now broken dreams, we bought our first house. Since then, it’s been a challenge to be content as the comfort feels uncomfortable. The familiar has turned foreign. I long for slowing down life by exchanging small talk over shared cups of Turkish tea. Feeling forced into the American Dream frustrates me when it feels so far from my God-given dream.

I went from meeting people at the park who had never heard the name of Jesus to washing piles of dishes while feeling so brokenhearted that I wondered if I’d ever be emotionally and physically healthy enough to do ministry again. I went from language lessons to medical ones. I gave up a life that seemed extraordinary in everyone else’s eyes to one that felt so boring that I struggled to find meaning in daily routines.

And yet, my body still has cancer cells in it. There is no cure: it doesn’t respond to chemotherapy and radiation. My prognosis for ten years is okay, but not amazing. The best way to fight this cancer is with more rest, less stress, more whole foods, less sugar, more exercise, more grace, more contentment, more prayer.

Throughout the New Testament, Paul often talks about contentment when he endures hardships for the sake of the gospel. He pleads for the Lord to remove the thorn in his flesh.

But he said to me, “My grace is sufficient for you, for my power is made perfect in weakness.” Therefore I will boast all the more gladly about my weaknesses, so that Christ’s power may rest on me. That is why, for Christ’s sake, I delight in weaknesses, in insults, in hardships, in persecutions, in difficulties. For when I am weak, then I am strong.” (2 Corinthians 12:9 NIV)

Contentment moves beyond simple acceptance to a place of delighting in where God has you— even in the midst of upheaval and uncertainty. It is in those moments, God proves Himself faithful to sustain and uphold you. Finding contentment in a season of brokenness defines where I am right now. In Ann Voskamp’s book, The Broken Way, she says:

“There is the truth: Blessed – lucky – are those who cry. Blessed are those who are sad, who mourn, who feel the loss of what they love – because they will be held by the One who loves them. There is a strange and aching happiness only the hurting know – for they shall be HELD.”

Contentment is finding comfort in the One who holds me in the brokenness instead of rescuing me from the brokenness. Contentment is a daily acceptance of my raisined fingers as I wash the hundredth dish. It’s celebrating that I know the God who holds me. Contentment is being grateful that this unexpected and unwanted season has allowed me to wholeheartedly love and focus on my young children, who need me to be fully present with them.

Contentment is trusting that loving the One who calls is ALWAYS greater than the calling itself.

I did not have any idea what to expect. END_OF_DOCUMENT_TOKEN_TO_BE_REPLACED

Christen Bordenkircher
Christen Bordenkircher is on the 10-year plan for finishing her Masters degree in cross-cultural studies from Fuller Seminary. With 10 years of professional work experience in nonprofit leadership roles and eight years as a professional photographer, Christen melds her creative bent in writing and photography with her heart for the outsider, holistic community development, and God’s heart for the world. As a pastor’s kid, a therapist’s wife, and recently, a cross-cultural worker in the Middle East turned cancer survivor, Christen loves authenticity, community, outsiders, meeting people on busses, and finding beauty in the mundane. Christen, as an ENFP, has discovered that storytelling through images and the written word allow her to externally process all that God is in doing in her and around her when the only ones around to listen are her two and four year old children. Christen shares her photography at www.christenBphotography.com and she has chronicled parts of her story overseas at www.christenandtony.com

Crossing the Skies and Seas

9 thoughts on “Finding Contentment in the Uncomfortable”