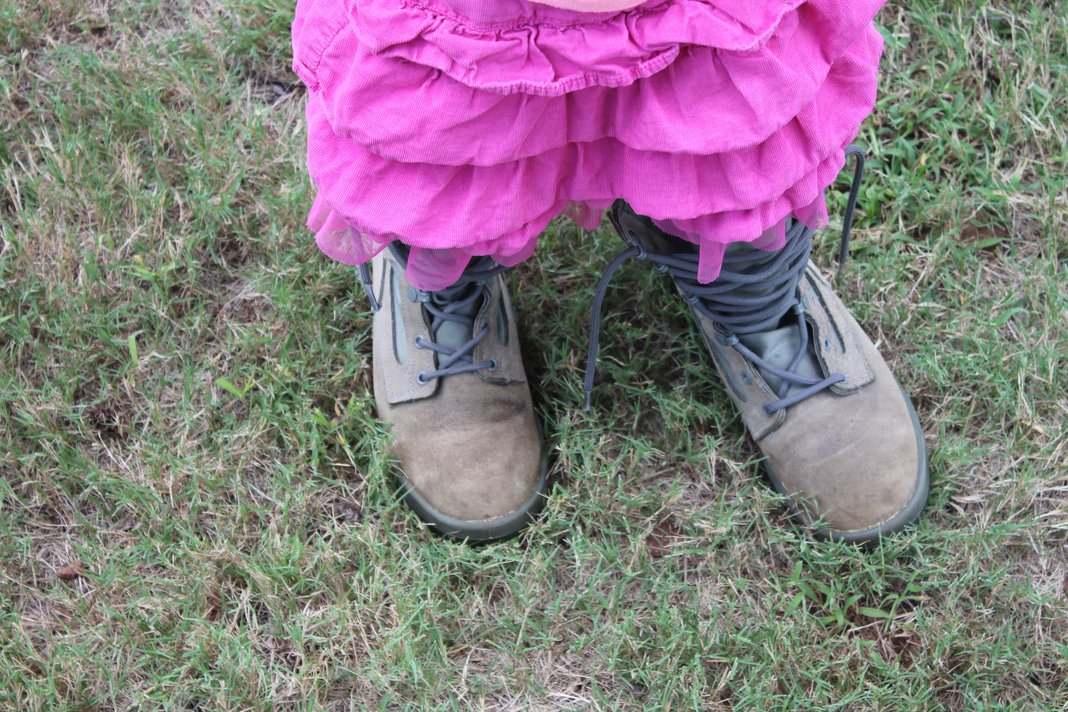 I sat there, sipping my mocha, while our daughter rolled a ball across the floor, back and forth, and periodically tried to escape from the little corner we had planted ourselves in, waiting for them to call the flight. I took a picture or two of father and daughter, grinning, holding each other close. And then, before I was ready for it, he was hugging me one last time, and getting in line to board his flight—the flight that would take him, first to training, and then to the other side of the globe, to fight for freedom and safety.

He stepped onto the jetway, and I turned toward the exit, holding back tears as my daughter toddled along beside me, totally oblivious to what had just happened. In a daze I walked back outside, strapped my daughter in her seat, and then drove across town before the tears finally hit.

The endless weeks stretched out in front of us. The mark I placed on next year’s calendar looked way too far away. Halloween, Thanksgiving, Valentine’s Day, Easter, so many holidays would pass before I saw his face again.

During our deployment season, I struggled. Struggled with envy as I saw pictures of families on social media as the holidays came near. Struggled with worry, as my husband lived in a volatile part of the world.

Because I was living through a season that felt anything but peaceful. A season where the contrast of life and death was inescapable—cast sharply in black and white. A season where I truly noticed the influence of my husband on our lives. I noticed the littlest things. The lack of heavy boots at the end of my bed. The lack of excitement at the end of the day, when my daughter used to watch with anticipation for her father to pull into the driveway. That missing set of hands during the bedtime routine. I missed his company. I struggled to see how these long months of separation could be of any good.

There were times that I let fear take over, as I imagined what could happen to my husband over there in that sand pit.

Fear, because I honestly doubted I could be a single parent during this season. My husband had always played such an immense role in our home life, I didn’t think I could do it on my own.

Fear, because I really don’t like being home, alone, in the dark.

Fear, because my husband was living in a truly violent place.

Yes, fear was very much a part of my life during that season.

But then, peace would enter in.

Peace would come, in the moments where my imagination would get out of control. When I’d start to become consumed with the what ifs.

Peace would come and smooth out all the frustrations, the loneliness.

No, my life during that season didn’t always look all that peaceful from an outward sense.

But the beautiful thing is that God understood.

He took the fear, the loneliness, the frustration, and replaced it with His peace.

“He will cover you with His feathers; you will take refuge under His wings. His faithfulness will be a protective shield. You will not fear the terror of the night, the arrow that flies by day, the plague that stalks in darkness, or the pestilence that ravages at noon. For He will give His angels orders concerning you, to protect you in all your ways.” (Psalm 91:4-6, HCSB)

This image, of a mother bird with her young, reminds me of just how gentle God is with all of us. He gets it, when we’re going through a rough season. When we’re struggling with fear, anger, frustration, loneliness. And sometimes He just holds us close. He protects us. He reminds us that we belong to Him. That He has the bigger picture already figured out.

That deployment season is now a few years back for us, but even now, I have days, times when I feel so lonely. Days when I’m frustrated as a wife and mother. And then, I remember that time of refinement. Those moments when God showed up, and simply held me, with all my frailty and doubts, close. And it reminds me, I really have nothing to fear. He’s got this.

8 thoughts on “Fear Not”