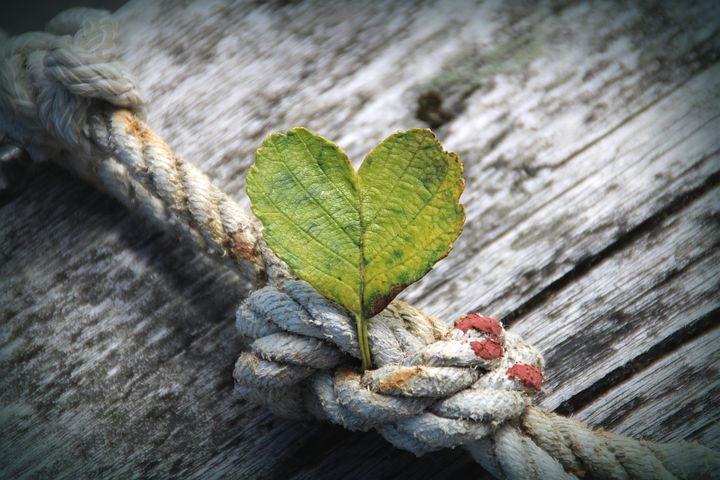 I roll along in silence between the sterile, white walls. Hospitals are like that—a bizarre blend of fear, hope, and rubbing alcohol. My brain spins in circles like the wheels on the chair beneath me. I ruminate on the blood, the pain, and the uncertainty of a happy ending. The knot cinches up tight in my stomach—so tight I can barely breathe.

That’s the thing about knots: The harder you pull, the stronger they get.

Me? I’ve spent a lifetime pulling.

I’m the 4-year-old girl, shivering in the corner from fear’s icy grip. “No, honey,” gently murmured my father, “our house will not wash away in a flood. The high water you saw was from a river far, far away from here. It’s alright.”

I’m the 11-year-old tween, shaking under her sheets—convinced that the dawn would give way to a burst appendix, a brain tumor, or any other diagnosis I’d yet to personalize. “No, honey,” whispered my mother, “your heart is healthy. You don’t need a pacemaker like Dad. No appendicitis, either. It’s alright.”

I’m the 32-year-old mother, clinging to her husband as our newborn slumbered in her swaddle. “Sleep when they sleep,” everyone said. But everyone didn’t harbor the knot within. At least not one this large for this long. It distended with each coo on the monitor and every crib side acoustic. “No, honey,” breathed my husband, half-asleep. “We don’t need to check her again. It’s alright.”

But it never was. Not for me.

I’d tug at the tangle inside, desperate to liberate my fear strand by strand. Time and again, desperation drove me to my solitary lifeline. The Bible on my nightstand sat poised and ready for rescue. I’d find the familiar words; His words. They promised peace, but lay dormant on the page. I combed the passages for headings like “The Cure of Anxiety,” finding them buried beneath yellow highlights and underscored ink:

“Be anxious for nothing.” *

“Even though I walk through the darkest valley, I fear no evil.” ***

But far from unearthing life, these words read like a headstone. “Rest in Peace,” they mocked, lying there in all of their state.

Like the fine print on a cereal box, each phrase disqualified me:

Simply detangle the knot in your stomach, and send 85 box tops to the address listed below. Many will enter. Only a few will win. But not you.

Each holy line held out peace, only to snatch it back again. I was paralyzed by fear and flunking Faith 101. No peace prize inside, just fear enmeshed with failure. This was my Gordian Knot.

Greek mythology tells the story of King Gordius and his namesake knot. It’s said that this legendary king contrived a knot so intricate, it was impossible to untangle. The prize for loosening the knot was . . . Asia. Enter Alexander the Great, who was trying to live up to his name. After poking at it for a while, he opted for a more creative solution: He drew his sword, and sliced the knot in half. Apparently, he received full credit for his answer. (I defer to colored pencil maps from fourth grade social studies.)

The whitewashed corridor is the ominous space of in-between. It holds the tension of fear, known and unknown. An ultrasound room waits for me at the hallway’s end. It too is sterile and pale; unfit for the weight of verdicts given there. As my wheelchair charters me closer to my fate, I yank at the knot inside. Every desperate tug makes it more resolute. It cinches tighter and tighter.

Gasping for breath, I search for the lifeline of words I’ve read a thousand times. I find none. But this time, I find him.

Jesus, the Word, walks beside me.

The knot tears in two as the words I sought seconds before surface: “I fear no evil for you are with me.” I had fixed so entirely on the first part, that I’d forgotten the last.

I wish I could say this hallowed hallway meeting lead to a happy ending. It didn’t. Jesus’ presence with me would not change my ultrasound’s outcome. My verdict was heartbreak, loss, and a new acquaintance with grief.

But it did change me.

Peace came—not in the absence of fear, but in the presence of the One who eclipsed it.