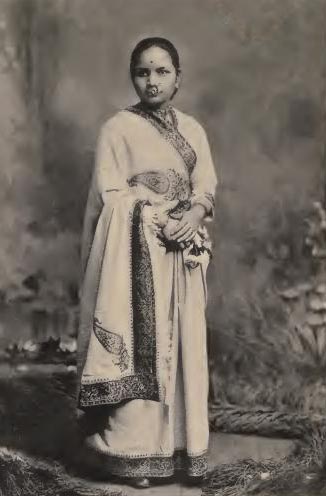 At a time when only around 1% of American girls studied past high school these three women were medical students at the Women’s Medical College of Pennsylvania.(1)

The young woman on the left was born on March 31, 1865 in Poonah, India, to a high-caste Brahmin Hindu family of the Maharashtra people. Her birth name was Yamuna, daughter of the sun.

When she was 9, she married Gopalrao Joshi, a distant relative almost three times her age. He strongly believed in women’s education, so he taught her. Despite giving her the bride name of Anandibai, joy of my heart, Gopalrao was not a kind teacher. If she played hooky or helped her grandmother with the cooking, he’d beat her with canes or wooden chairs.

At age fourteen, her only child, a boy, died at ten days old. After this, the couple fixated on her studying medicine. Gopalrao wrote to many missionaries for help, but they all wanted the couple to convert to Christianity first.

In the spring of 1880, Theodosia Carpenter read one such exchange in the January, 1879 issue of The Missionary Review in her dentist’s waiting office in Elizabeth, New Jersey. She was intrigued and wrote to them offering assistance. Anandibai could read and write English, so she and Theodosia became regular correspondents, writing about their lives and customs—and about Anandibai coming to America.

In 1882, she and Gopalrao decided that she would go to America alone, upsetting everyone who knew them.

Brahmins were forbidden to cross the ocean, to eat food prepared by non-Brahmins, and to drink water that had been touched by foreigners. Doing any one of these things meant ex-communication.

Plan after plan fell through but she wrote to Theodosia: “Though I cannot teach courage, I must not learn cowardice, nor at last leave undone what I so long since determined to do.”(2)

On February 24, 1883, she spoke to a mixed crowd of Indians and Europeans at the Baptist College Hall, asserting that:

The speech was a rousing success. The Director General of the Post Offices of India not only gave them 100 rupees, but also administered a fund for her education.

Finally, in April 1883, the 18-year-old left India and arrived in New York in June, spending the summer with Theodosia Carpenter in New Jersey.

Here is part of her letter requesting admittance to the Women’s Medical College of Pennsylvania.

“Though I may not meet, in all points, the requirement for entering College, I trust, that as my case is exceptional and peculiar your people will be merciful and obliging. My health is good, and this, with that determination which has brought me to your country against the combined opposition of my friends and caste ought to go along way towards helping me to carry out the purpose for which I came, … to render to my poor suffering country women the true medical aid they so sadly stand in need of, and which they would rather die for than accept at the hands of a male physician. The voice of humanity is with me and I must not fail.”(4)

Anandibai developed a reputation for her calm demeanor, talking down a mental patient who had a knife, and enduring through to the end of autopsies of babies and children, but her health did not remain strong. She had several bouts of illness and by the time Gopalrao joined her in the summer of 1885, was probably already suffering from tuberculosis. She graduated on March 11, 1886 and accepted a position by June 12: Physician-in-Charge of the female wards of Prince Edward Hospital in Kolhapur, India.

When they arrived home in mid-November she was very sick, but glad to discover they were celebrities, not outcasts. Wherever they went people of every caste prayed for her and newspapers printed updates about her health.

She died on February 26, 1887, just shy of her 22nd birthday. Her ashes were sent to America to rest in Theodosia Carpenter’s family plot.

We celebrate Dr. Anandibai Joshi for her acomplishments:

Natalie Hart
Writer at nataliehart.com
Natalie Hart is a writer of biblical fiction, a children's worship leader, dancer, mother of two teenagers, and wife to a rock n roll musician. She has lived in Canada, Australia, New York City and the mountains of Oregon. Family and cheap real estate drove her back to Michigan.

5 thoughts on “Daughter of the Sun”