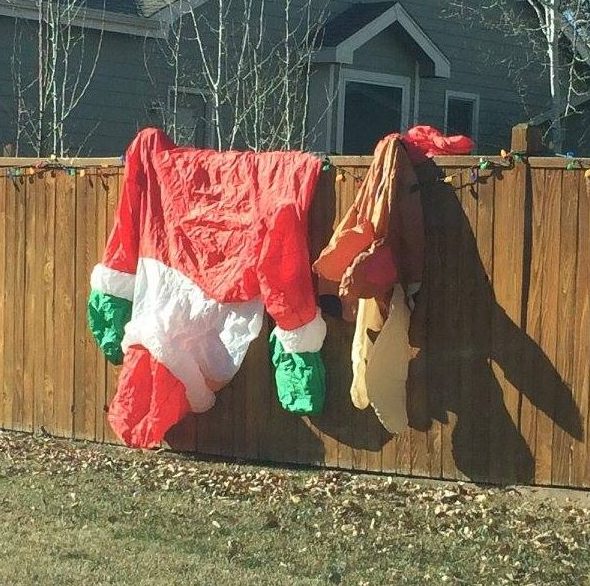 A light glares in my eyes as I’m lowered into position.

Handheld torture devices encircle my head. I am at the mercy of my interrogator. There is no mincing of words in THE CHAIR. There is only cutting to the quick:

“How was your Thanksgiving?” she leans in. The dreaded loaded question. (You know.)

How do I play this? The sugar-coated white lie or the brutal truth?

She pulls the needle closer. There is the whirling of a drill.

“Rough,” I mumble, my mouth pried open with foreign objects. “It was rough.”

“I’m so sorry,” her voice softens.

An awkward pause, and she proceeds with prepping my crown.

A fitting way to cap off this holiday week, I think.

Here’s a tip: Want to kill a conversation? Tell people how your holidays really went.

I drift back to a similar scene from a few days before. In a slightly more comfortable chair, I’m pierced by another Thanksgiving question—this time from a Smithsonian Channel narrator. She disrupts the gentle lull of Black Friday commercials by throwing a curve ball. It comes in hot:

“So how did an event that wasn’t called a Thanksgiving, held by people who weren’t called Pilgrims, whose Native-American guests were there for diplomatic reasons, an event that was a festival—not a dinner, where turkey wasn’t important, that wasn’t in November, and that only happened once. How did that come to emerge as America’s preeminent national holiday?” (Behind the Holiday: Thanksgiving)

Somehow, I feel better and worse all at the same time.

Unmet expectations, scripted into a fiction of our own making? I query back in my head, like it’s not supposed to be rhetorical.

Isn’t that the recipe for every holiday? Like those passed-down culinary traditions that simmer on the stovetop, brimming with anticipation and possibility? Their aromas transport us to a magical time where generosity and expectations collide. But then we taste it—and there’s something not quite right. Something’s missing.

Thanksgiving this year—for me—was a slow-moving car crash of “not-quite-rights”: I’ll spare you the details other than there were no extended families or friends (thanks, again, Covid-19), no turkey or pumpkin pie (“I know! Let’s do Cajun food this year!”), no Christmas light reveal on Thanksgiving night (squirrels’ traditional fare for this day apparently includes green wires). And I won’t even mention some of the “minor” emotional upheavals throughout. The dental crown was just the cherry on top.

I sit in the afterglow of it all, with the cognitive dissonance of that “First Thanksgiving” and all the narratives evolving since: Curated and abridged, they are stuffed with unrealistic expectations that forever fall short.

Maybe, I scowl in my head at the narrator on TV, we should just chuck the recipe!

But she’s already on to something else. Something about “no pumpkin pies at Plymouth” either.

My husband smirks as he relays a recent news story from Taiwan. It elevates unmet expectations (appropriate for Black Friday) to a ridiculously-new level: A Chinese woman with a dog clutches her Gucci shopping bag as a thief traces her steps down an Italian street. With Dickensian precision, this modern-day “Artful Dodger” springs from the shadows, snatches the bag, and bolts from the scene.1 And with equally-robust Dickensian precision, the plot twists as the perpetrator becomes the “victim.”

In Oliver Twist, the pickpocket is brought to justice when he’s caught with a extravagant silver snuff box. The gentleman recovers his trinket to sniff another day and “The Dodger” gets a one-way ticket to (presumably) Australia. Justice. Sorta.

On rare occasions, life imitates art—as is the case with our Italian bag-snatcher. He undoubtedly had, to borrow from Dickens a bit more, Great Expectations for his Gucci grab bag.2 This non-fiction redemption arc crests with the testimony of the dog-walking victim who, in the interview, described her immediate reaction: How would the thief respond, she wondered, when he opened his prize filled with dog excrement? (That’s what the shopping bag was really for.)

To which we all, with Tiny Tim, exclaim

With unmet exceptions of Thanksgiving “safely” in the rear-view mirror, I’m attempting to move on. It helps to carry out my own personal December inquisitions: “Tell me your favorite Christmas traditions?” is my favorite conversation this month. It’s far less intimidating than the dentist’s probe. (And much kinder too, as there’s no captive audience here.) But, really, they’re equally loaded. I like this question because it sheds light on one’s Christmas psyche. Holiday hopes and expectations are here simultaneously exposed.

Responses vary from heart-warming to bizarre:

Doctor Who marathons—which should not be used in the same sentence with— Christmas Day (Tammy Perlmutter, do I still have a job?)

Carp in the bathtub pending a fish feast (Czech Republic friends, you know who you are. Rumor has it, it gets worse for Easter . . .)

And my personal favorite:

Lighting real candles on a real Christmas tree whilst singing real Christmas carols, with a REAL fire extinguisher at arm’s length from the piano (This phenomenon is equally nerve-wracking and breathtaking.)

I won’t exclude myself here. Maybe it’s this fascination with beautiful and bizarre Christmas traditions that’s birthed my own. Every year, I comb Christmas over and attempt to capture then caption it with pictures and words. I unveil my collection to family and friends at the month’s end as a gift of sorts. Judging from past feedback, such as “I am speechless” and “Oh my!” and “Creepy is right,” it’s a seasonal highlight. For example:

Occasionally a picture aligns with Christmas-carol lyrics. Welcoming these hymns for the season is a beloved tradition. Pairing a picture with words, though, takes me back again to that Black Friday chat with Ms. Smithsonian and my husband’s Gucci story:

Unmet expectations, scripted into a fiction of our own making . . .

I think the chronology is a bit off here.

I love the idea of tranquility. But that was a night of anything but . . .

Terrified shepherds, angels proclaiming (not whispering), and a birth without an epidural make me think that the “wondrous gift” was NOT so “silently” given in the Little Town of Bethlehem.

Was there “sleep in heavenly peace” that night? “No crying” from the lips of “little Lord Jesus“? Maybe. My kids sure found their vocal cords early—and that was without the manger hay.

All those “radiant beams” from Jesus’ face?  It’s the stuff of X-Men sequels, not feeding troughs cradling “the dawn of redeeming grace.” (But let’s just all agree that these words by Joseph Mohr are among the most beautiful ever written.)

These brilliant, gifted writers and musicians—I see—are a lot like me (minus the “brilliant,” “gifted,” and “musician”) descriptors. They, too, spin fiction with truth to create fulfillment. They, too, craft recipes to satisfy the human craving for expectations met. Their elusive quest for beauty bypasses “not-quite-right” for the fullness of perfection. These narratives are stunning but impossible in a world that lays in “sin and ever pining.”

I recently found a photo that I captioned for Christmas 2020:

Nothing on that first night was perfect either. Except for Him.

I ponder it anew this year and let the waves of Christmases past, present, and future wash over me as Sara Bareilles deconstructs a tower of holiday expectations: “Love is who we are, and no season can contain it,” she reminds me.

Author’s Note: Embedded in this piece are covers to some of my most cherished Christmas songs. May we join with these artists in the longing for expectations met— only in Him. Merry Christmas.