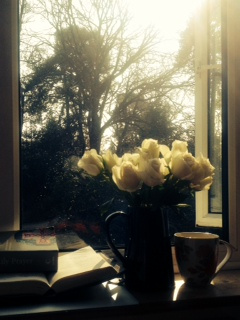 A cyclone threatened.  We knew the devastation it would leave in its wake would be enormous. As it began, we had no idea what the consequential damage would be, but we knew that it could not be stopped, and we had to wait until it had blown through before we’d know whether repair was going to be possible.

This wasn’t a literal cyclone. My cyclone was the days before, during, and after I told my husband that I was in love with someone else.

I had spent months forming a deep emotional bond with another in preference to any sort of emotional connection with him. I didn’t want to remain married to him. Although I’d ended things with the other, I couldn’t promise that they would, in fact, be over for good. I didn’t believe that my husband liked me, let alone loved me. Years of smaller storms of life had left me feeling desperate, lonely, isolated, and unloved in our marriage, to the point where I’d intended to end my life and had it planned down to the smallest detail. However, as I worked through the scenario before carrying it out, I realised that some part of me didn’t want to die.

That thought alone had saved me.

I didn’t see how we could survive the cyclone. I was certain our marriage would end.

The cyclone raged as we attended marriage counselling and sat at opposite ends of a sofa, the damaging and damaged words making their way into the space between us:

“If it’s a choice between being able to work and being married to you, I choose work.”

“I don’t understand you.”

“We can’t even communicate about the most basic things.”

Sometimes we couldn’t speak to each other for a few days after each session. The words spoken in that one hour had ripped away previously held certainties and had blown into a tangle the things that we thought we knew about each other.

Gradually the winds began to ease. The cyclone became a storm. The storm became a squall. And then the stillness came.

We started going out for bike rides together. No conversation, but good, shared experiences. We planned a holiday for our family. I volunteered both of us to work on the same stall at a school fundraiser—our names written together on a board in the playground.

Bruised and exhausted. Having lost much, but still standing.

Today, we stand amidst the rubble of our lives. Behold, the old has passed, the new has come. For a time we thought that we had to clear all the rubble and try to find all the old things in the mess, in order to rebuild.

But no. We’ve been camping within the destruction for a little while. It gave us time to adjust to the reality of what has happened. We’ll never be able to clear away all the debris. Some of it will always be here.

But we will rebuild.

Everything we had has been stripped away and all that remains is the foundations. What we choose to rebuild will not resemble what was here before because that has gone. It’s not damaged; it’s gone.

We’re looking forward to once again, as we did right at the start of our lives together, building something completely new. We’re not who we were when we built the first time. We’ve changed immeasurably—life does that to you. There are children and we are older, but I think that we may now work better together than we ever did before.

The best place to go to see the Northern Lights.

The cost of a Trans-Siberian railway ticket.

The sports coaching qualifications he wants to achieve.

The writing I want to do. We’ve both been reduced to our core selves through this experience—maybe our best selves.

With nothing around us anymore to hide behind we’ve both said, This is who I am. This is what I can give you. Do you still want me? And the answer is, Yes, yes, yes. A thousand times, yes.

I want you to hear this: you can survive a cyclone. Even if it destroys everything, it doesn’t mean you’re finished.

Fog rolled in last summer, hovering outside my window above END_OF_DOCUMENT_TOKEN_TO_BE_REPLACED

Caiobhe
Writer at The Hope Diairies
Caiobhe (meaning 'Beautiful at Birth') is the pseudonym used by the writer of The Hope Diaries. Following infidelity (her own) she was found by the reality of Hope, and writes about marriage post-affair, seen through the paradigm of faith and hope in Jesus. She writes an honest account of her journey, believing above everything else that God is enough.
Latest posts by Caiobhe (see all)

6 thoughts on “Camping in the Rubble”