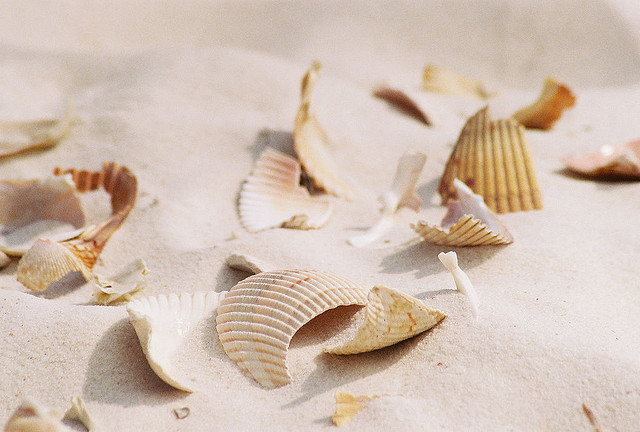 At our beach wedding we were given 2 leis. The use of leis in wedding ceremonies is a culturally significant tradition common in Hawaii. The lei symbolizes the mutual exchange of love & respect. At it’s advent, the lei was used as a peace agreement between Chiefs and that too is an unspoken aspect while swapping covenants & vows. This is why when you are in Hawaii, when someone hands you a lei never refuse. It’s considered to be rude to reject a free gift of love & acceptance.

Though our wedding was held on the beautiful sandy beaches of Lake Michigan, we were each given a beautiful lei which consisted of hundreds of small glassy seashells strung together on three thin wires. Without having any personal racial or ethnic ties to Hawaiian culture we declined to use them in the ceremony but kept them as keepsakes of our special day. I loved that these leis started with peace. As a divorcee starting life over, my strong desire was for a life of peace. Peace from the pain of a difficult marriage that started much before I was ready to be an adult, let alone a wife. I longed for peace from the pain of a custody battle which ripped my entire soul to shreds. I longed for a different life. So when I ran off and married him on the beach, a peace agreement felt most fitting.

Hey can we live together peacefully? Awesome. That was my heart’s desire.

A few years later, after a move, I took the leis and hung them with my other necklaces from a hook in our closet. One morning our precocious one year old daughter found one of the leis, yanked it off the hook and put it in her mouth, as toddlers do. I imagine them scanning each room for potential choking hazards zeroing in on their target and going in for the kill. I saw she had the lei and didn’t protest. I underestimated her just as much as I had underestimated my husband. I didn’t think she could break it just as I didn’t think he could break us.

And he did as well.

A few minutes later when I noticed she broke the wire the seashells had all ready cascaded onto our entire bedroom floor with handfuls of tiny seashells going into her mouth by the fistful. I took them out of her mouth & escorted her from the scene of the crime. The symbol of love and respect lay scattered across our floor. How ironical.

We were running late for Church and I was stressed & sweaty. The image of this broken lei got to me and I was choked up. I put her in her crib to play and  got on my knees to survey the damage. The seashells had found a way under our bed and dressers and half way across the room. The wires were broken, yes but many of the individual seashells were also broken. How did she manage to create this much havoc in five minutes flat? They were everywhere. Not a crevice unturned. I started scooping them up into piles the irony growing thicker by the second.

This fragmented lei was once a beautiful necklace, just as I was once a beautiful bride brimming with desire for a marriage that would heal. But the marriage didn’t heal and in fact did more damage than if it hadn’t happened it all. It became my own fragmented nightmare full of abuse, neglect & betrayal. My heart felt as broken and spread thin as these tiny shells littering our bedroom floor. Here I was gathering these broken shards together just as time and time again I had gathered my own broken heart, just as I had gathered us together while talks of divorce loomed over our heads. Just as I had gathered counselors, praying people & clergy to intercede. All I’d done for 14 months straight was gather and gather more broken pieces and to what end?

I got down on my knees to pray to God for hope and healing, just as I found myself on my knees attempting to put something back together that would never be able to go back to what it was. I stared at the pile. Some were only chipped. Some were missing key pieces. Some had been stepped on and mangled to near decimation. They weren’t going to be neatly strung back onto the wires that was for certain. Our marriage wasn’t neatly going to survive the damage it had undergone. The failure of the shells to be a part of the lei they once were was as inevitable as me being who I once was before I entered this failed peace agreement. What was broken in me, would never be, could never be brought back to life. I became a shell of that woman; foolish with desire, naive with trust and eager with futile hope built on lies as thin as the wire stringing those fragile sea shells together.

When fragile things are strung along by lies and betrayal, they tend to snap. I grabbed a handful and with a strong squeeze crushed them under the weight of my anger. I watched the tiny little shards fall back to the floor purposeless. Maybe, I wondered, it’s time for me to snap.

*This musing was written awhile ago. There has since been reconciliation and restoration due to the miraculous healing power of God and our desperate desires for His power to make all things new in our lives. I could have added that story here too, but Chile we’d need more much time than this. Let’s save that for another day shall we? In the meantime, know that much work has been done, I am safe and we are closer to that original peace agreement than we ever were before.