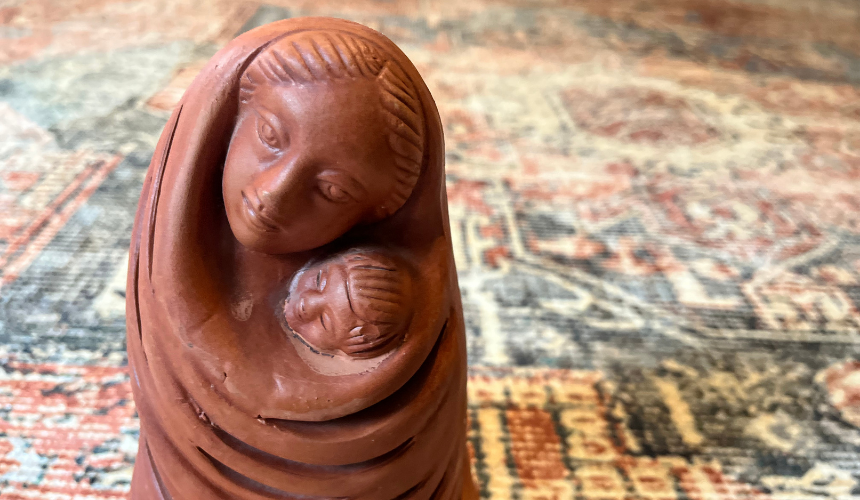 As I flick on the switch, the tiny bulb meant to act as the star casts a warm glow over the scene below. “You have a lot of nativity sets, Mom,” my son comments after he helps set up the wooden, ceramic, hand-carved, and clay sets next to the snow globe manger scene and the stitched Kantha magi picture. I stopped counting how many baby Jesus figures adorn our living room come Advent-time every year. They have captivated me since I was a little girl, even before I knew who this baby in the creche even was. I just knew there was something strange and beautiful about this helpless babe that people revered.

What was attractive about a wriggling bundle of flesh? What power was there in this helplessness? It’s a mystery I still wrestle to answer every year as I gaze upon these nativity sets I have collected from around the world.

In the church, most of the year we contemplate the cross, what we more often see as the symbol of our redemption. But I find myself drawn more to the cradle than to the cross. We view the coming of the Messiah as a culmination of our salvation, but I think it’s just the beginning. The enigma of the life we live in and through the fully God, fully human Savior is something we work out with fear and trembling our whole lives.

The week before we unboxed our mangers, I sat at the computer for hours pondering all I had learned in the last three months during my final trimester of studies for my master’s degree in Practical Theology. We were tasked with writing a statement of faith, detailing what we believed about important doctrines like the nature of God, creation, and our eternal destinies. One question I spent more time on others is what the Imago Dei really means, what it says about us that we were created in the image and likeness of God.

Is it something about our physical bodies? Our capacity to reason? Our freedom to choose or to love? Our eternal nature? I read arguments from theologians and early church fathers arguing for each of these.

But the words I kept coming back to were ones I had heard months before when I spent a day hiking and praying at the Ignatius House in Atlanta. A quiet Jesuit priest spoke to a handful of us retreatants throughout the day about the spiritual exercises of Saint Ignatius of Loyola.

What stuck with me from that day is he didn’t speak about becoming more spiritual through these contemplative exercises but becoming more human. “We become human on our journey through this life and so become what God is like,” he said. It felt scandalous, blasphemous. I grew up hearing that our humanity was nothing more than fallen and sinful from birth, taught we should try to be more like God, less like us. Instead, he was telling us to live more fully into who God created us to be.

Father Peter reminded us that Jesus was the eternally existing son of God, already divine. But his mission in coming to earth was to learn to become human—who he was as a man fully dependent on and obedient to his Father. And that is our mission as well. He talked about how Jesus grew his entire life into the perfect image of God as revealed in a human—the very good image we were always created to look like before we chose disobedience. “Jesus embraced being human,” he said, “and entered fully into the tragic beauty of humanity.”

The German Catholic theologian Johann Baptist Metz writes in The Poverty of Spirit that we speak about God taking on our flesh too casually “because inadvertently we are accustomed to consider only the biological event, the external process.” Of course, Jesus physically becoming the helpless child of Mary is profound but taking on what it means to be human means so much more than putting on skin and bones.

Metz focuses on the temptation of Jesus as an example of the times when he chose to take on the powerlessness and poverty of what it means to be human, instead of relying on his divine nature. He chose, again and again, to enter into the mess of human life—the pain, rejection, and hardships—and to submit to the will of the Father as he lived.

What does it mean to be made in the image of God? The perfect image of God was revealed to us in a baby, in a boy who lived as a refugee, in a wandering teacher who dined with prostitutes and social outcasts. He loved those the world rejected. He chose those who looked weak and wrong according to the standards of the world. He needed his mother, played with kids, worked with his hands, laughed with his friends, drank wine at weddings, and wept when he hurt. The image of what we are to be as humans showed himself to us as one struggling in prayer, longing to be free of the pain of God’s rejection but willing to obey what was asked of him for the good of his brothers and sisters.

Jesus was always growing in wisdom and stature—learning, changing, becoming. He was not a stagnant God loosely cloaked in flesh, untouched by the world. Jesus was fully incarnate, truly immersed in the messy, complex world his own hands created so many years before. He didn’t show us what God temporarily living among us could look like. He showed us what the life of a human fully dependent on God should be. As he wrestled with the competing emotions of desire and obedience, he revealed what choosing a surrendered life poured out for others looks like—yes, even to the cross and beyond.

“In giving us the Only Begotten One, God shows us what our existence is, showed us the true nature of our humanness,” says Metz, “and showed us the proper spirit to have in becoming a human being: the spirit of poverty.” The more we look like Jesus, the more helpless, poor, and powerless we look.

It’s this return to the manger I need at the end of another long year. With the rest of the weary world longing to rejoice, I turn my eyes back toward the coming of that tiny flicker of light. In the dark of my living room, I stare at that bulb. I am reminded that we can choose to say yes again and again, just as he did.

So come again this year, God with us. And show us again what it looks like to plunge ourselves into the wholly messy work of becoming human. Amen.

The Light Came Down

Waiting for the Beginning Without an End