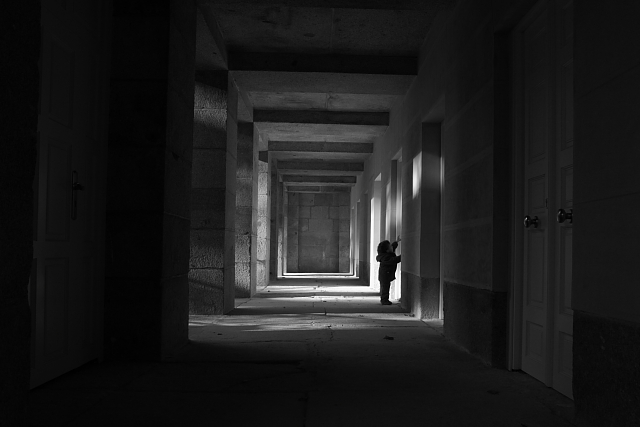 I used to have a kind of waking nightmare.

It started in college. I’d be alone in the dorm bathroom, my toiletry caddy in hand, going down the aisle of shower stalls, their white plastic curtains like ghosts’ hems, all in a row.

All of a sudden, the dread of what lay behind those curtains would seize me. I imagined the worst: serial killers, malformed monsters, a cold fog with a black hole where a soul should be. I imagined the horror waiting for me to choose wrong. I imagined my scream of panic when I did.

Screwing up my courage, I’d yank a curtain aside, to see—nothing.

But my heart would chuckle, saying you never know. You never, ever know.

That dark fancy lasted more than a decade. But recently, I realized I don’t have it any longer. We have a shower curtain in my house and I’ve never once hesitated to open it. It doesn’t seem frightening to me anymore.

At the time, I thought my fear was stupid. But my dismissiveness, I think, was wrong.

There wasn’t something behind any particular curtain, no. But there was lots of things hidden behind the surface of my life I was too afraid to confront.

I didn’t even realize how many skeletons I’d hidden in my closet until I started pulling them out, one by one.

It was crowded in there.

But now that all that stuff’s gone, I don’t feel what’s behind curtains anymore.

In Barbara Brown Taylor’s book, Learning to Walk in the Dark, she talks about nightmares stalking her. Someone recommended that instead of trying to avoid the dreams, she should ask it what it wanted.

She did, and instead of a monster, she found a part of herself that was waiting to be heard.

Often, the darkness has something to tell us.

I wish I had taken my waking nightmare seriously. Not so I could have gotten everything in my inner-life spic and span, but because I spent so much time and energy telling myself I was dumb for being frightened. I told myself, over and over, that I was over-reacting, that I was a scaredy-cat or a drama queen.

I deserved better. My psyche was right on the money. I had something very real to be afraid of.

It undoes everything when you face your demons. It’s not for the faint of heart. There are often very good reasons why we stay stuck, why we make excuses and put off seeking healing. Facing our shame, our fear, and our inertia means being ready to let go of everything that has protected us in the past.

It’s easier to tell yourself you’re silly than get honest about why you’re filled with dread.

It might seem easier to dismiss yourself, be curt and frustrated with your tender, shivering self.

But the part of yourself that is frightened is also incredibly resilient. Start taking it seriously, listening to its fears with real attention, and you might be surprised what it’s capable of.

If you dread something, stop telling yourself you’re silly.

Make friends with the darkness. Listen to what it has to say. Look dread in the face and see if you can read its lips.

I am ready to live out this truth: a true nightmare is keeping our whole selves hidden. I am ready to affirm that a half-life is a bigger nightmare than anything hidden in the dark.

11 thoughts on “Are You Willing to Listen to the Darkness?”